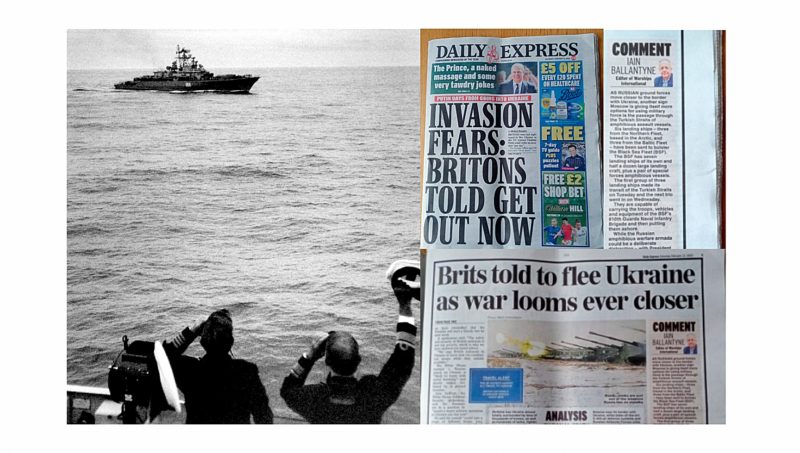 Just over thirty years have passed since I took the photograph on the left in the montage above, while aboard the Royal Navy frigate HMS London. It captures the moment the Cold War at sea ended in the Arctic.

The Soviet Navy Northern Fleet frigate Gromky had come to meet the British warship in the Barents Sea, lunging out of a dark and misty East as the so-called Hardliners’ Coup in Moscow collapsed.

The Russian vessel’s upper deck was filled with cheering sailors, celebrating the end of the long East-West face off that had followed the end of WW2. On that day in 1991 in the Arctic, the British sailors cheered back too – and what a run ashore was had thereafter!

HMS London, along with the Royal Fleet Auxiliary tanker RFA Tidespring, were the first Western naval vessels in more than 40 years to be allowed down river from the Kola Inlet to Murmansk, past some of the most secret bases in the Soviet Union.

Later they sailed to Archangel, where local people treated HMS London’s sailors and embarked Royal Marines as heroes who had liberated them from more than four decades of communist oppression.

Yet it had looked like the historic voyage would be cancelled when the hardliners’ coup erupted in Moscow. However, British Prime Minister John Major and Russian leader Mikhail Gorbachev were determined to continue with the London’s visit, and so we sailed into the High North as ambassadors on a goodwill mission.

Not long before HMS London’s tasks in the Arctic and the Baltic had been very different – intelligence-gathering on Soviet combat capabilities, just in case war came one day. Fortunately for us all it had not turned out that way, bearing in mind the massive nuclear arsenals of both sides.

Sadly, a visit to Murmansk and Archangel like London’s in 1991 is unthinkable today – the Russian Arctic bristles with nuclear and conventional weaponry of Putin’s regenerated fleet. The navies of Russia and NATO once again confront each other, from the High North, to the Atlantic and also in the Mediterranean and Black Sea.

Worse still, a major war in eastern Europe is seemingly about to erupt. Today I contributed a concise commentary to the Daily Express on a naval aspect of the Ukraine Crisis as the news become ever more alarming. Hence the other images in the montage.

We are seeing headlines I would not have expected even a year or so ago, never mind 1991-95 while reporting on the end of the Cold War, the collapse of the USSR plus Warsaw Pact and its aftermath from the Barents Sea, the Black Sea and Baltic…Murmansk and Archangel to St. Petersburg and Kronstadt, from Moscow to Sevastopol, Novorossisk, Prague and Riga.

Across my work as the Editor of WARSHIPS IFR magazine since 1998, I have noted with alarm the return to ‘great power rivalry’, the rise of the ‘strong men’ in East and sometimes the West, who are dragging us back to that dark place we thought we’d left behind on that day in the Barents Sea.

I reflect on aspects of the new Cold War at sea, and its risks, in the March edition of WARSHIPS IFR, which is out next week. In the April edition (out 18.3.22) I will re-examine what my trips to Russia and the former Warsaw Pact countries revealed and the lessons that era still offers.

In the meantime my book ‘HMS London’ (Pen and Sword Books) will soon be out for the first time in paperback  and in which (among other things) I tell the amazing story of that historic trip to the Soviet Union in 1991. I also mention it in a recent episode of the WARSHIPS POD, the podcast of WARSHIPS IFR.

A nostalgic comparison with the situation today.