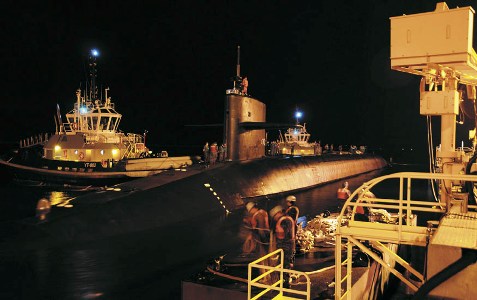 During the Cold War rational actors prevailed. In the Cuban Missile Crisis of late 1962 the world stood on the edge of an apocalypse, yet President Jack Kennedy and Chairman Nikita Khrushchev recognised nuclear war was not, in the end, an option. For the sake of all Mankind they stepped back from the brink. Today, almost exactly half a century on, as the world faces the prospect of a nuclear-armed Iran, the images and rhetoric of the Cold War are resurfacing. British Foreign Secretary William Hague has gone on the record to draw a comparison between the Cold War and a world coming to terms with a nuclear-armed Iran. This was not a matter of political hubris.

It appears Mr Hague at least has come to believe that to allow Iran to gain a nuclear capability would open up decades of uncertainty as Tehran flexes its new-found strategic leverage. Despite Tehran’s protestations to the contrary the likelihood is that Iran has embarked upon a programme to obtain a nuclear weapon. For Iran the race to detonate a device, no matter how basic, is crucial. The political and religious leadership in Tehran remember the world’s reaction to North Korea’s first nuclear test. Even though North Korea’s barely achieved a 1KT yield it earned international respect (and fear) in an instant. Iran’s leadership, beset by internal political division and the threat of insurrection, took note. With the lack of a consensus for military action, the international debate has focused on diplomatic measures designed to make Tehran pay for its activities. While economic sanctions hardly have a track record of achieving much they are part of a gradual escalation that could lead to military action. To maintain the moral high ground every avenue needs to be seen to have been explored. Meanwhile, the Iranians race to build at least a crude device and conduct a test. The shock waves would span the world in seconds.

William Hague’s intervention is designed to spell out to the world what it would be like trying to contain a nuclear-armed Iran. It is highly unlikely the acquisition of nuclear weapons would suddenly make Iran into a rational actor on the international stage. Its sponsorship of terrorism around the world is well known. Links to Al-Qaeda, Hamas and Hezbollah become more self-evident each passing day. Hague’s calculus is likely to be that a nuclear-armed Iran would be emboldened and seek to secure regional hegemony and, above all, threaten Israel. As part of this process the Iranians may, like the Soviet Union in the 1960s and 1970s increase their sponsorship of proxy wars. The West would have to increase military spending. As Iran’s missile technologies eventually develop an Inter-Continental Ballistic Missile (ICBM) the threat of a nuclear attack against European and American cities would become very real. The basing of AEGIS combat system equipped warships in the Mediterranean, North Sea and the English Channel is an obvious counter. The US Navy is to forward deploy four Arleigh Burke Class destroyers to Rota in Spain for just that task. That isn’t a magic bullet and ballistic missiles may get through – and even AEGIS ships armed with the ICBM-killing SM-3 missile stationed in the Gulf may fail.

What kept nuclear war from happening in the Cold War was the doctrine of Mutually Assured Destruction (MAD) that bound both sides, achieving a deterrent balance between two power blocs that thought along the same lines. However, MAD is not necessarily something that can be relied on once Iran gets The Bomb. While one side might seek to act rationally, knowing it could never pre-empt a situation, the other can play on that, as its values system is driven by a very different rationale. There may be those in Tehran who believe civilisation is beyond salvation and in need of a new start. They could perhaps achieve that by first destroying Israel and then America and the West. It sounds outlandish, like some kind of latter-day Strangelove scenario, but the energy, resources and ingenuity the Iranians have displayed means they are determined to go nuclear for what they regard as good reasons. The Iranians know they are risking an attack by Israel – probably including assault by cruise missile-armed submarines – possibly before the end of this year, to neutralise their programme before it goes deep underground. Iran’s President Mahmoud Ahmadinejad has gone on record suggesting that an end to Israeli occupation of Palestinian lands is a worthy aim, though trying to achieve it with a nuclear strike would seem to be counter-productive. Despite protestations that he has been misinterpreted, the perception remains that the President of Iran wants to see Israel removed from the map. How that is achieved is often glossed over. His belief that the so-called ‘hidden Imam’ will return to Tehran, signalling the end of days adds to the apprehension. The building of a major road in Tehran along which the ‘hidden Imam’ will return fuels concerns about Ahmadinejad’s ability to be the kind of rational actor who realises the whole point of possessing nuclear weapons is never to use them. The calculus of MAD does not work if one side is eager for global destruction, rather than seeking to obtain ideological supremacy while avoiding it.  In that sense, what we are potentially confronted with is not a new Cold War, but something far more dangerous.

• In our May 2012 Dr Sloggett and Charles Strathdee consider whether or not Russia with a newly re-elected President Putin will seek to reset its foreign policy to impose a new Cold War with the West.