THE WAR ON PIRACY: SUCCESS OR FAILURE? 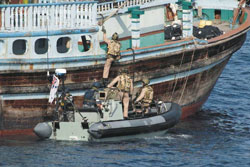 Pirates have discovered the power of manoeuvre. By hijacking fishing vessels and using them as mother ships to project power well beyond the traditional reach of the skiff operating from coastal waters, the pirates have ventured well beyond the Somali Basin. In 2010 attacks ranged into the deep waters of the Indian Ocean, over 1,000nm from the shoreline of Somalia, operating on the fringes of the Indian Economic Exclusion Zone (EEZ), close to the coastline of Oman in the Arabian Sea and well to the south, close to Madagascar. These long-range operations ensured pirates have been able to maintain their drumbeat of hijackings, to continue the revenue stream they and their network of business associates have become reliant upon. Realistically this situation is not going to change any time soon.

The manoeuvre room being enjoyed by the pirates is testing the response of NATO and its allies in providing security for the safe passage of merchant vessels once they enter the Arabian Sea and Somali Basin. While it is true that piracy developments provide new challenges, it is unfair to criticise the performance of the various international maritime forces in the area. They are challenged with adapting to an adversary operating asymmetrically.

The situation is not as bleak as some commentators would have us believe. Real progress has been made in the Gulf of Aden over the last two years as EUNAVFOR has developed its tactics. It takes time to develop responses to such situations. Silver bullets rarely exist in practise; ask any commander in Afghanistan. While the headline figures for 2010 make uncomfortable reading for the commanders of EUNAVFOR, multinational CTF-151 and NATO, the situation is far from bleak. Due to the work of EUNAVFOR and the associated CTF-151 warships operating in the Gulf of Aden (GoA) successful hijackings in the area are now rare. 23,000 vessels a year transit the area now relatively unmolested. Attacks and sightings of pirate skiffs have declined markedly since 2008

In 2008 pirates could find rich pickings close to the Somali coastline. Life for the pirates was a breeze, not a monsoon. It was as they say ‘a target rich environment’. Since then a semblance of sea control has been established in the Gulf of Aden in the last two years and EUNAVFOR has created a situation where it is able to react within 30 minutes to any radio call for assistance. With this force in place and its tactics developed, pirates no longer plunder commercial traffic in relatively narrow sea-lanes of the Gulf of Aden. They now have to roam into the deeper waters of the Indian Ocean and operate for many days at a time away from the Somali coastline. Life for the pirates has become a little more difficult as they have greater areas to comb for their prey

The current challenge for the EUNAVFOR, CTF-151 and NATO commanders is therefore to find a way to build on the success in the GoA, achieved as it has been with the deployment of a significant number of warships. They must find the right balance, with warships being possibly relocated from the Go A into the Indian Ocean to provide addition al levels of protection.

gt;To achieve this, several things need to occur. Firstly, cooperation needs to be extended, with local coastguard organisations working from places like the Seychelles, the Maldives, Oman, the Yemen and India. This requires cooperation in the provision of equipment and growing the capacity of local forces plus development of a comprehensive maritime picture of activity in the area under observation. This process is already underway

Part of the wider solution lies in adopting tactics that have been pioneered on land against insurgents. In Iraq and Afghanistan military commanders have developed what are known as ‘ink spots’ – localised areas of security that can be extended with the cooperation of local people. This same approach can be adapted to the maritime sphere, with assistance to countries operating around the fringes of the Indian Ocean creating ‘governed space’ along their coastlines that reduce the freedom of manoeuvre enjoyed by the pirates.

Secondly, the naval commanders need to maximise maritime awareness that arises from the use of aircraft operating over the Indian Ocean and the deployment of Unmanned Air Vehicles (UAV) that also can contribute to gaining greater maritime awareness. Couple that with the use of Long Range Maritime Patrol (LRMP) aircraft to sanitise areas of the ocean and new tactics can emerge that exert more pressure on the pirates. The recent deployment of LRMP aircraft by a number of nation states into the affected zone is a welcome sign of the commitment to the mission by countries such as Japan and Germany.

Thirdly, naval commanders need to reflect upon how to get the best out of the warships they currently have deployed, rather than just deploying more. An analysis of the pattern of recent attacks shows that the pirates have focused upon a number of areas, such as the Arabian Sea, to pick up commercial vessels leaving the GoA. Extending Internationally Recognised Transit Corridor (IRTC) coverage and adapting convoy tactics are obvious potential solutions. Blockading the pirates’ launch points is another possible tactic; using a combination of LRMP to watch the beaches and warships to interdict suspected pirates just after they launch from the beach.

A combination of increased cooperation by nation states across the Indian Ocean, the effective deployment of LRMP aircraft to provide increased maritime domain awareness, and the eventual deployment of UAV as part of the coalition warships’ armoury will provide a basis for further constraining the activities of pirates. The aim must be to drive the pirates to the peripheries, where their ability to earn ransoms becomes increasingly more difficult.

This is how, in the end, the military will create the conditions for real progress to be made. While it is difficult to pretend that piracy can ever be ‘put back in the box’, the level of activity can be progressively reduced to a point where indigenous and professional coastguard authorities, trained and supported by NATO and the EU, can provide the level of governance needed in their own coastal waters.

MORE APOSTLES NEEDED TO PREACH THE GOSPEL ACCORDING TO FOX?