US Navy Leads The Iraq Strike Back

Dr Dave Sloggett & Francis Beaufort look at events that led to US Navy jets once again embarking on combat missions over Iraq. It provided a further illustration of the vital need for strike carrier power in order to respond in such an emergency. 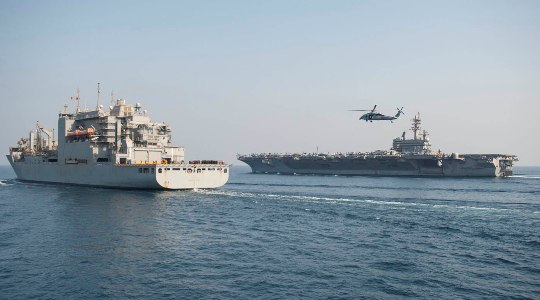 The rapid movement of Islamic State (IS) fighters across the border into Iraq from their strongholds in northern Syria and down the Euphrates towards Baghdad took European and American political leaders by surprise. The collapse of an entire Iraqi Army division defending the city of Mosul added to the immediacy of the threat to the capital.

It seemed that the officers and men of the Iraqi Army had been intimidated by the fearsome reputation gained by IS fighters with their extreme brutality towards any who opposed them.

Using captured equipment supplied to the Iraqis by the United States the terror group was able to create a mechanized force that quickly subdued a number of towns and cities en route to Baghdad.

It seemed that their quest to create a new Caliphate – an Islamo-Fascist state carved out of Syrian, Iraqi and even Jordanian territory – was irresistible. The alienation of key Sunni areas from the Shia-dominated national government meant the terrorist army could make common causes with disaffected locals, though this was not uniformly the case.

The threat to Baghdad provoked two reactions. Firstly, in Baghdad the Shia population rapidly mobilized its men to move north and try to block IS forces sweeping towards the capital. Secondly a political debate started in the West over what it was prepared to do to shore up the Iraqi government and prevent IS taking Baghdad.

Given last year’s British failure to win a vote in the House of Commons for planned intervention in Syria – an action that persuaded the Americans not to act militarily either – the prospects for large-scale Western military action in Iraq were low.

The deployment of volunteer units did, though, halt the IS advance on Baghdad. Changing their plans, the IS forces then decided to move against Iraqi Kurdistan, a stable state-within-a-state and also to wipe out minority sects with no Sunni or Shia overlords to protect them.

Rumours of massacres of those who failed to convert to Islam emerged. Many civilians, including thousands of Christians and Yazidi sect men, women and children, fled their towns and villages into the harsh mountains and borderlands adjacent to Kurdistan.

A humanitarian disaster was potentially unfolding and political leaders in Washington and London, alongside allied nations such as Canada, decided to mount a humanitarian relief operation.

Air drops of supplies to refugees quickly followed. A focal point was Mount Sinjar on which it was claimed thousands of Yazidis were trapped, encircled and threatened with either dying from lack of food, water and shelter, or being slaughtered by IS fighters.

Meanwhile, IS was also intent on maintaining some momentum in areas where the Iraqi forces were at their weakest. In their sights was the hydroelectric plant at the Mosul dam, the main source of electricity for the capital.

If IS could not take Baghdad it was prepared to seize this prized asset and create another way to exert pressure on the capital. There was a suggestion that IS might even blow up the dam with the aim of creating a massive flood that could kill thousands.

The situation was so dire that countries bordering Iraq and Syria became fearful they could be next on the list for an IS invasion. In Jordan, Saudi Arabia and Turkey military forces were mobilized.

In Turkey specific fears over the fate of nearly 50 Turkish citizens held by IS meant that the government was unable (overtly) to offer the Americans the use of NATO bases to strike IS formations in Iraq.

In such a situation the ability of United States strike carriers to project power from over the horizon was critical. An initial decision to deploy unmanned aircraft and fighter jets to obtain intelligence on the location of IS formations was quickly mounted.

Within days combat jets from the carrier USS George H.W. Bush were flying over 50 sorties a day over the areas in Iraq where IS were operating. The aim of these operations was to provide a detailed intelligence picture.

The use of carrier-based air power to provide intelligence was never going to be enough to stop IS progress. RAF Tornado jets – like other UK aircraft flying from Cyprus – also joined the intelligence collection effort.

The Iraqi forces needed more tangible help, though the alleged motivation for US Navy air strikes, which were mounted even as the humanitarian effort unfolded, was to protect American training and advisory personnel and bases in Iraq rather than in direct air support.

A Special Forces mission, utilizing US Navy and US Marine Corps tilt-rotor aircraft and also probably involving US Navy SEALS was mounted to check the true situation on the ground around Mount Sinjar. This revealed that the majority of the people had managed to evade the clutches of the terrorists and made it to Kurdistan, or were adequately supplied to soon reach safety.

A rumoured massive air-land operation to save thousands of trapped civilians was not, after all, needed. F-18 aircraft from the George H.W. Bush conducted air strikes around the dam at Mosul. Using imagery collected from unmanned aircraft, which maintained a watch over the dam, the F-18s quickly found their targets and were able to eliminate vehicles caught out in the open.

This limited use of air power created the conditions for the Kurdish Peshmerga forces on the ground to retake the dam. IS were not invincible. Having suffered their first reversals in Iraq the inevitable wave of suicide bombings against Shia targets in the country started and an American journalist taken hostage some time earlier in Syria was beheaded, with footage of the horrific deed – said to have been carried out by a British-origin IS fighter – broadcast to the world.

The terrorists warned there would be more beheadings if the air strikes continued. Within hours the US Navy struck IS targets again.

At the time of writing, the international community appears to be struggling with a whole range of dilemmas connected with the rise of a brutal new terrorist army determined to establish its own fascist state. In the short term the US Navy’s air power and reach, not only strike jets but also its ability to project Special Forces when and where required, appears to provide the difference between abject defeat and at least holding the line.

The problem confronting the USA is that it is in the midst of a strategic pivot to Asia-Pacific, which was supposed to see the Europeans take on a greater role in the stabilization of the Middle East.

With barely a single aircraft carrier operational in a European navy that is a difficult thing to achieve – and there is no way in such a volatile region that forward-basing land-based aircraft is a wise idea. Such a move is expensive, logistically ponderous, lacks the sortie generation capability and 24-hour responsiveness of a carrier air wing, and means that Western forces are vulnerable to attack. Regional nations will also not be at all keen to host massive military air bases for air strikes to be maintained. Such facilities are a magnet for terrorist retribution.

Aircraft carriers do not come with all that baggage and are invulnerable to terrorist attack. Not even the entire RAF could offer what a single US Navy strike carrier provides. Europe, though, only has one operational strike carrier of any worth in this context – the nuclear-powered Charles de Gaulle, which is small in comparison to a Nimitz Class ship of the USN and offers far less strike power.

The Charles de Gaulle, though combat proven during the Libyan campaign of 2011, is an unreliable beast, requiring frequent repairs and maintenance. Last month Charles de Gaulle was hosting VIPs and WW2 veterans off Toulon for events to mark the 70th anniversary of Allied landings in southern France.

In the long-term the Americans, who sent senior officers and top Pentagon officials to the recent christening of the UK’s first new strike carrier, Queen Elizabeth, must surely be pressing the British to ensure they commission two strike carriers with fully formed air groups.

For the UK Ministry of Defence the alarming success of IS has come at a critical point in the lead up to the 2015 Strategic Defence and Security Review. The Royal Navy now has an ideal opportunity to reinforce its message that always having a carrier in service is crucial to the security of the United Kingdom. That requires two vessels to ensure no gaps in cover.

Even if by some miracle IS were to be totally defeated in the coming months, a situation that seems highly unlikely even in the most optimistic of assessments, another security challenge will quickly emerge. The lessons arising from the current crisis in Iraq and operations over Libya three years ago are clear. Carrier power is critical even in trying to mount a limited military or humanitarian intervention. 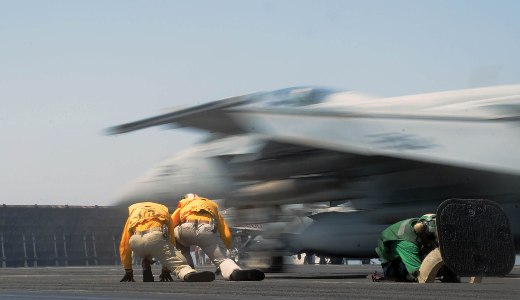 An F/A-18F Super Hornet of Strike Fighter Squadron (VFA) 213 launches from the flight-deck of the aircraft carrier USS George H.W. Bush. A few weeks later the carrier’s aircraft were launched on air strikes in Iraq.

EUROPE NEEDS TO SHAPE UP AND EASE AMERICA’S GLOBAL BURDEN