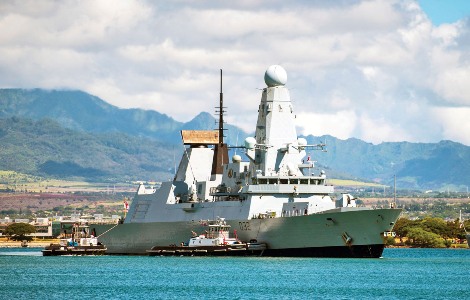 Severe storms battered parts of the British Isles during Christmas 2013 and into this year, initially leaving many thousands of people in numerous regions without electricity or help to battle flooding.

Prime Minister David Cameron thought it a good idea to show he was giving support to beleaguered communities shivering miserably in the wet darkness by visiting them. He experienced their fury rather than expression of thanks.

As the New Year dawned, with a fresh wave of severe storms, flooding and extreme travel problems outweighed electricity supply difficulties, but it was a question of degrees of misery.

There is a looming power crisis in the UK, which is down to prevarication and errors of judgement by recent governments. Old coal-fired power stations have been decommissioned without new electrical generation arrangements (in the form of nuclear power stations, for example) being fully in place. Experts warn that soon there will be frequent blackouts due to the demand for electricity far outstripping supply.

The politicians, though, have muddled objectives, too keen on showing their green credentials by pushing (as yet immature) wind and tidal generating schemes. What the people want is, therefore, not what they get. All they want is electricity to light and heat their homes, with which to cook their meals and to run their businesses (and enable them to use the technology that is needed these days to do the most simple of things). What the people of the UK lack is clarity in leadership.

The anger over failure of power supplies and the inability of the nation to cope with storms is but a foretaste of what may one day hit the British Isles due to risk-taking with an essential resource called the Royal Navy.

As ever in the UK, the politicians and the Army generals who lead the military, focus too much on the cost of maintaining a properly equipped and sized navy while failing to appreciate its worth.

The recent speech by the Chief of the Defence Staff (CDS) at the Royal United Services Institute (RUSI) in London seemed more a plea to retain infantry regiments after the Afghan campaign than a suitably balanced assessment of Britain’s real defence needs.

Hidden among some very valid points about potential hollowing out, General Sir Nicholas Houghton appeared to be making a partisan plea for the British Army to be given a new job overseas in ‘the grey area of conflict prevention and upstream stabilisation.’ What does this mean? Another painful, expensive (in blood and treasure) and ultimately futile campaign such as those conducted in Iraq and Afghanistan?

The General was right about overstretch and lack of critical mass in Royal Navy personnel, but the Service is caught between a rock and a hard place. It has been for many more years than the British Army, especially when it comes to contraction in the face of an expanding mission portfolio.

It needs more than any other Service to stay on the cutting edge via what the CDS called ‘exquisite technology’. The general seemed to be implying that funding for this equipment had been unwisely protected in the Defence budget at the expense of other things. To not have cutting edge vessels and aircraft would, though, doom the Royal Navy to destruction in any future high-end conflict.

The CDS cannot in his speech on the one hand draw attention to the ascendancy of Asia-Pacific – where there is massive investment in ‘exquisite’ high end maritime equipment – and on the other hand pose doubt over whether Britain (and Europe) needs the equivalent.

The answer is obvious: Yes, the Royal Navy does need ‘exquisite’ submarines, carriers, frigates and destroyers. The problem is that it does not have enough of them (or the people to operate them). General Houghton agreed with a need to get the Ministry of Defence ship in better financial state, and suggested, that ‘for the moment at least, [there is a lack] of state-based symmetrical threats at scale.’

This is rubbish, at least in naval terms, for a proper, fully formed fighting fleet takes many years to create, has utility across the whole spectrum of operations, and its new equipment is designed to be used for decades. It cannot just be created out of thin air, nor be subject to passing trends in warfare. Naval forces must be ready at all times to respond to a crisis or existential threat.

The Royal Navy already has a high rate of deployment and operations even when waiting for action – via use of its ‘exquisite’ kit – that far outstrips the activity rates of the other two armed forces in so-called peacetime.

Post-Afghanistan it will not be the Royal Navy failing ‘to monetise a huge national asset which can considerably assist the delivery of developmental benefits’ (whatever that means) by sitting in its bases waiting for things to do.

The CDS feels that via ‘a strategic posture of engagement we [the forces] can better add to the country’s influence on the world stage’. This is something that the Royal Navy is defined by and has been for centuries.

If the CDS means that the Army and Air Force need to be found employment in new war zones, then he is out of touch with what the British people want, namely no more Iraqs or Afghanistans.

Let’s not forget those conflicts were initially supposed to be swift, limited engagements that would soon be over and relatively pain free. That was very far from being the case. The General suggested that too much taxpayer’s money is being spent ‘on large capital equipment programmes often with an eye on supporting the United Kingdom’s Defence industrial base.’

There is some truth in that but neither should the taxpayer be abused by maintaining legacy British Army garrisons. It is gratifying to finally see the British Army in Germany set to come home from its Cold War barracks, even if it is more than 20 years since the Soviet threat disappeared. By the time the troops quit Germany it will have been 31 years since the fall of the Berlin Wall.

Why the Army maintains a huge armoured warfare school in Canada – with vast amounts of UK taxpayer funded heavy equipment for the Army to play with on the plains in Cold War-style war games – is surely something that needs further justification. Or is it needed because the Army is training its infantry and armoured units for the sort of state versus state clash General Houghton says is irrelevant?

With the Army an inveterate foe of the Navy’s new carrier programme, the anti-platform, anti ‘exquisite equipment’, anti conventional capabilities stance was not surprising coming from a British general. It also suggests a lack of understanding that the ability to construct warships is a defence capability in itself (even it has in the past not always been properly managed by the Ministry of Defence).

The CDS also feels the British armed forces are too platform-orientated, but of course without platforms (ships and submarines) there is no way the RN can project decisive effect. Whether it is keeping global sea lanes secure or sending ashore humanitarian aid (as it did so successfully alongside other navies in the Philippines) the RN needs highly capable, modern, flexible platforms. Land-based air force planes cannot do anything when air bases and airports are out of action and Army units have not yet acquired an ability to march on water.

A major lesson of the Falklands War and indeed even of the Cold War was that a navy needs to be on the cutting edge of technology and big enough to cope with unexpected demands (and casualties). Today a major driver of global naval spending is the increasingly dangerous game of state rivalry in what has been termed a new Cold War (this time a contest over natural resources).

The Americans are developing a naval-led Air-Sea Battle doctrine to deal with it and any future confrontation will probably not be restricted to Asia-Pacific. Even if it is the consequences will touch the UK deeply. Just as government ministers complain about electrical generating companies and local councils – many of the latter having suffered cuts in their budgets – not having people or equipment available in a crisis, so must the Navy (and even the other armed forces) have ‘exquisite equipment’ and the people to fight the battles.

Above all, the politicians must ask themselves if a nation that imports 95 per cent of its consumer goods, and the majority of its energy supplies and other vital resources, has a navy big enough to protect it all from geo-political storms?

The Royal Navy also needs critical mass to respond swiftly and adequately to sudden severe disruption. Government ministers may yet face the fury of the British people who ask why there is no heating or light in their homes, no food on their tables or fuel for their cars, or energy for their workplaces.

They may also ask why the Navy has not evacuated their relatives trapped overseas in a crisis zone. Worst of all they may demand to know why a small Navy without the critical mass in people, surface warships, submarines and aircraft suffered such heavy losses, with thousands of British sons and daughters dying in action.

Will the politicians then understand the worth of a full spectrum Navy big enough and capable of coping with all the missions required?

An example of Royal Navy ‘exquisite equipment’ at work: The Type 45 destroyer HMS Daring at Pearl Harbor to teach the US Navy how to conduct single platform maritime security deployments. Photo: US Navy. 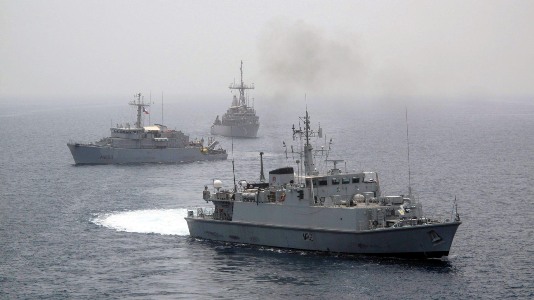 Another piece of cutting edge naval kit, in the form of a US Marine Corps V-22 tilt-rotor aircraft picking up humanitarian aid supplies from a warship for delivery ashore in the Philippines. Photo: US Navy.

HAS GLOBAL BRITISH NAVY LOST THE FIGHT AT HOME?