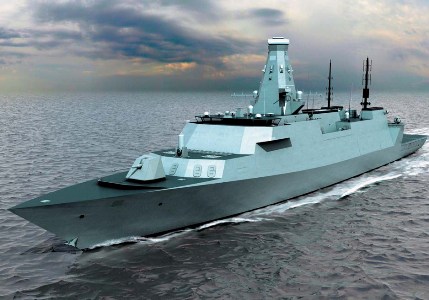 The Global Combat Ship (GCS) is the forthcoming major combatant for the Royal Navy, due in service in the early 2020s and perhaps with a hull life of 25 years. It was formerly known as the Future Surface Combatant (FSC). The struggle over the vocabulary and nomenclature indicates just how hard it is to design a ship for the conditions of warfare in the next half century. War there will be, that much is certain. A multi-mission warship, like the Type 26 (as the GCS is also known) might be used for high-intensity combat one day and lower intensity counter-piracy operations the next, or even to deliver humanitarian aid and offer disaster relief. Such tasks can take place all within the space of one deployment (much as they can for the Duke Class, Type 23 frigate that the new vessel is to replace).

When the last new major surface warship for the British fleet was conceived (the Daring Class, Type 45 destroyer) it was meant to replace the Type 42 destroyer, which had served the RN so well since the mid-1970s. Soon the number of Type 45s to be built was reduced – placing the same costs for the entire programme on fewer hulls. The UK Ministry of Defence (UK MoD) argued that, as the Type 45s were each more capable (and would have greater availability than the Type 42s) the Navy would not need 12 destroyers. The plan became not to replace the Type 42s ship-for-ship but instead construct just eight – and that soon became six. The Navy failed to argue persuasively enough that 12 hulls were needed for the same degree of ubiquity that is necessary to safeguard Britain and its global interests, which remain considerable. This time, with promises of replacing the extant 13 Type 23s on a hull-by-hull basis, the Royal Navy will need to develop and maintain strong arguments, to win support for its cause in Parliament, in the Press and amongst the Public. Readers of Odin will recall that there were originally 16 Type 23s, but they were slashed back in 2004/05 by the previous government’s ill-judged decision making. Even a good case regarding numbers of ships will be defeated if the cost of each new Type 26 is allowed to get out of hand. A number of factors enabled the cost of the Type 23s to remain tightly under control (in a programme running from the 1980s to the end of the 1990s, the first completed in 1989 and last in 2001). The final batch of Type 23s cost £100 million each, which was less than the lead ships had cost some 15 inflationary years earlier. A look at ships similar to the Type 26 in service reveals widely differing costs. Denmark’s Absalon Class cost £180m each, a Zeven Provinciën Class frigate of the Royal Netherlands Navy costs £525m while Álvaro de Bazán Class frigates built in Spain are about £650m each. The cost price of the Type 26 must be at the lower end of this spectrum, or the Royal Navy can expect the Type 23s to be replaced by a far smaller number of Type 26s. The present estimate of the cost of the Type 26 falls within a band of £250m to £350m.

Series ordering and production (like the last Type 23s) and an overseas market would help keep down the unit cost of the Type 26 and ensure that sufficient numbers of ships remain affordable. Canada and Turkey had definitely passed on any Global Combat Ship involvement, the former due to national pride being against foreign vessels and the latter on cost grounds. Brazil may still be worth piping onboard as a rising naval power with a tradition of investing in British warships. There are similar competitors out there for foreign markets, not least the Franco-Italian FREMM frigate (which looks an awful lot like the Type 26). The French variant of the FREMM costs £286m per ship. Denmark’s new Iver Huitfeldt Class (again similar in appearance and capabilities) each cost around £212m per ship. There was a time when Britain was a leading exporter of affordable, well-designed warships (witness the Leander Class frigate). But, amid all the discussion of overseas sales Britain must not forget that taxpayers need to see their money well spent, in order to give the Royal Navy enough Type 26s (and more than 13 would be better) in order to secure British people and interests in peace and also survive and win any fight. 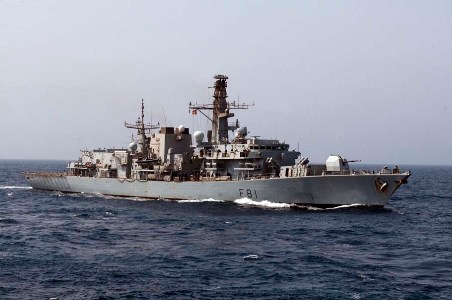 The vessel the Type 26 warship will replace, a Type 23 frigate, in this case HMS Sutherland last month (Sept 2012) on patrol in the Gulf of Oman. Photo: US Navy.

HOW GREAT IS BRITAIN’S PERIL?