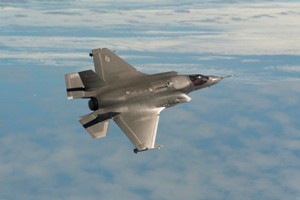 In the 1960s the Polaris Executive safely and swiftly guided one of the most remarkably successful UK national capability programmes from concept to operational reality. It managed to send the first of a new class of ballistic missiles submarines to sea within five years of being established.

Today the British nation is confronted with a similarly huge challenge when it comes to the successful introduction into service of two new super-carriers, which are every bit as important in the strife-torn 21st Century as the Polaris boats were 50 years ago. Yet, just as the construction of the vessels themselves is divided up across many places in the UK before being integrated at Rosyth, so the management of the introduction appears to be split.

The modular approach to constructing the new ships is proving successful, but Odin wonders if all that fine work will be for nothing. Britain’s mighty new sword has two pairs of hands on it, turning and twisting in opposite directions. In the 1960s did the UK follow the insane logic of creating Polaris submarines in which the Navy controlled and ran the submarine only and the air force was responsible for the missiles because they flew through the air? Yet, that appears to be the situation today, with the air force and powerful lobbies within the circles of government allegedly following the dumbed down logic that if something flies (the F-35B) then it must be the RAF’s.

This is an antediluvian, perversely old-fashioned mindset, flying in the face (pardon the pun) of all established practice and precedent. No other carrier nation in the world today would tolerate anything as bonkers as letting its air force have a major say (or indeed any say) in maritime aviation of any kind. As Commodore Steve Jermy points out elsewhere in the December edition there is only one exception to the rule and that is the UK.

Precedent shows that splitting carrier aviation between two services is a disaster. In WW2, the Germans allowed land-based air to control supply of aircraft for their new carrier Graf Zeppelin, with the result that there was never a chance of a viable carrier strike capability.

The German fleet was forever at the mercy of British carriers. The Italians likewise suffered the same fate, their own carrier never completed and the Italian air force failing time after time to support naval operations. The British experience of land-based air supporting naval operations was equally bitter. Two thousand sailors and marines were killed off Crete in May 1941 partly due to a lack of air support from the RAF. The battle-cruiser Repulse and battleship Prince of Wales were arguably also sunk due to RAF failings. Several hundred more lives were lost and British sea power suffered a severe strategic blow that it never recovered from.

Between the wars the RAF – which was given control of carrier aircraft – deliberately starved the Royal Navy of adequate planes in order to ensure funds were not diverted away from its own pet projects. From leading the world in carrier aviation – and let’s not forget until 1918 the world’s biggest air force was the Royal Naval Air Service – the UK was relegated to the second division.

It suffered grievously in WW2 until a fully naval Fleet Air Arm could be restored to full capability. Other carrier operators, including the US Navy, French Navy and the Indian Navy, must look at the situation in the UK today and shake their heads.

All the experience, all the common sense and pure operational logic – and combat-proven success – achieved by the Royal Navy’s fully integrated, single-command Fleet Air Arm (FAA) appears to have been wilfully ignored.

Judging by the words of Prime Minister David Cameron at Rosyth recently, when he visited Queen Elizabeth in build, it seems that he does understand why the carriers are essential.

There again, he gave a similarly inspiring speech to the men and women of HMS Ark Royal just months before he got rid of their ship and made some of them redundant. That decision was forced on the P.M. by the RAF telling him the Harrier (the UK’s only fixed-wing maritime strike aircraft) had to be axed rather than the Tornado.

Will we see something similar in the future – perhaps under a different Prime Minister – where the logic for the carriers is hobbled, or even the vessels themselves put into mothballs or scrapped, due to the RAF’s stranglehold on the aircraft? The Royal Navy must rue the day it gave up control of its own jets to borrow RAF-owned Harriers for the Naval Strike Wing (NSW).

It resulted in no visible sign of the Fleet Air Arm in the planes’ livery (reinforcing the mentality that if it flies it must be RAF).

It also gifted the light blue mafia the whip hand over maritime aviation (despite having no real interest in it, as also demonstrated by the scrapping of the Nimrod and Harrier to save the Tornado).

The only way to make the most of the awesome capability the Prime Minister now appreciates is to ensure that Carrier Strike is entirely driven by the Royal Navy. It is the true (and only) expert in the field. That includes not only ownership and operation of the ships, but also all the aircraft, in a dedicated Naval Strike Wing, that flies from them. Anything else would be a betrayal of the UK taxpayer’s investment and could put both British lives and key national strategic interests at risk.

An F-35B on a test flight, part of the process in creating the strike carrier jet for the Royal Navy as well as the American forces.