The Royal Navy Cannot Rest On Its Laurels 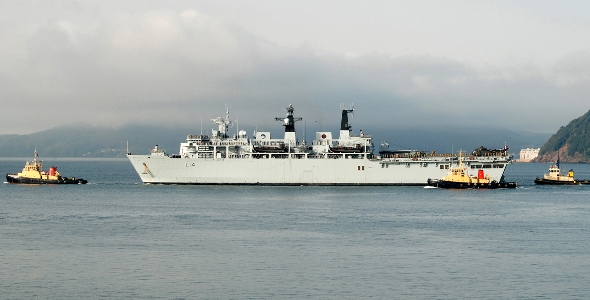 The First Sea Lord, Admiral Sir George Zambellas, has said the Royal Navy is ‘on a roll’. A dynamic and determined Naval Service boss, it is his job to be upbeat and Admiral Zambellas has much reason, for the first time in many a year, to be so.

The Navy’s major equipment programme is finally coming to fruition, addressing serious capability gaps. The Royal Marines have been partially re-equipped; six Daring Class (Type 45) destroyers will soon be in service, while Astute Class attack submarines are coming on stream. Presumably close to the (aviator) First Sea Lord’s heart, every aircraft in the Fleet Air Arm is being replaced.

Prime Minister David Cameron announced at the recent NATO summit in Wales that the second of the new carriers, Prince of Wales, will be commissioned but let us not count our chickens before they are hatched.

The decision to run both carriers, rather than mothball and/or sell one of them off, must be ratified in the looming Defence and Security Review, a process that is not due until after the General Election in 2015. It is the National Security Council that must do the ratification and there are a lot of ducks to be arranged in line.

As for the F-35 jet that is to be the primary strike weapon of the new carriers, many experienced and wise officers, who have been long associated with the future carrier and Joint Strike Fighter projects, and who struggled hard to keep them in the Defence programme, would possibly observe that we have the wrong ships and wrong aircraft.

The ships needed to be fitted with ‘cats and traps’ and the aircraft should have been the already combat proven Super Hornet or the F-35C carrier variant of the JSF, rather than the less capable F-35B jump jet.

However, after a quarter of a century of arguing (even the Strategic Defence Review that re-affirmed Britain’s commitment to a new carrier programme is nearly 20 years old) we are where we are. The Royal Navy can surely be relied upon to make the Queen Elizabeth Class and the F-35B work? Furthermore, there are strong signs that there will be a naval air group not merely a temporary deployment by RAF aircraft.

The carrier air group for a single Queen Elizabeth Class vessel is supposed to be made up of 36 fixed-wing aircraft (and four helicopters). So far 48 F-35Bs have been ordered of which just 12 will be ‘owned’ by 809 Naval Air Squadron. The total planned order of British F-35s will surely be well in excess of 100?

Since the political and industrial behemoth that is BAE Systems has a work share of up to 15 per cent of each of these aircraft, and there is no successor generation of aircraft on the drawing board, we can expect the F-35B order for the UK to be fulfilled.

Two carrier air groups (or naval strike wings as they should be called) would seem to imply at least five more Naval Squadrons in addition to 809 NAS should be formed. Also on the UK naval shopping list are four new ballistic missile submarines (SSBNs), though whether these are built will depend on the outcome of the next and the next-but-one General Election.

There was a collective sigh in Whitehall when Scotland voted ‘no’, for it is clear that little or no contingency planning had been done about where to base the deterrent force should a Scottish Nationalist regime implement a policy of ridding Scotland of nuclear weapons. That there was no Plan B is shocking given the strategic importance of the SSBN force.

When it comes to Type 45 destroyers let us not forget that it was originally envisaged there would be 12. Providing protection for two super-carriers, performing various other roles required of the modern major surface unit and achieving the critical mass capable of soaking up combat damage and losses is probably more than just six Type 45s can cope with.

With Type 45 numbers so low, a Type 23 frigate, no matter how enhanced, does not come anywhere close to providing the kind of protection USN cruisers and destroyers offer. Nor do any major British surface warships have the same kind of land attack capabilities.

The Royal Navy is promised a new generation of Global Combat Ships (GCS) otherwise known as Type 26 frigates, while the RN’s mine-hunters are distinctly elderly and need replacing. There are, though, four new tankers being built in South Korea and three Offshore Patrol Vessels (OPV) on order from Scottish shipyards.

Odin wonders whether in some new contingency plan thought will be given to basing submarines and storing their missiles, and reviving the shipbuilding industry, in other parts of the United Kingdom beyond Scotland, in order to make the Defence industrial base and the RN’s support infrastructure more robust. Devonport, for example, is due to lose its operational submarine status to Faslane soon, but why not base four Astutes in Scotland and three at the Plymouth base?

It would certainly be a more popular option for the submariners. The majority of the attack boat crews prefer England to Scotland but will be forced to spend their entire careers in the latter. The Astutes were meant to be based in Devonport originally until a Labour government changed the plan in order to buy votes in Scotland.

The First Sea Lord is right to be pleased the Royal Navy continues to mount an impressive range of operations, but there is growing recognition that 30,000 people is not enough to man the present Navy. It is certainly insufficient if Santa Claus delivers everything on First Sea Lord’s wish list. The case for a manpower uplift, like everything else, is going to have to be fiercely and well-contested in the coming months in the face of stiff arguments from the Army and the RAF for their prize projects and maintaining their own personnel levels.

The Royal Navy cannot rest on its laurels and be content with the current situation, for governments tend to give with one hand and take away with the other. There’s no point in having lots of shiny new equipment if there are not enough men and women to operate it. There is also the danger that force levels are so low there are not enough vessels of the right kind to put together task groups that can protect themselves while conducting offensive operations when and where needed. The Navy needs to go in harm’s way and be able to sustain a high tempo of operations.

Anything else is a Navy in being rather than a fleet fully and gainfully committed alongside key allies when issues are being settled decisively at the top end of business. It is notable, for example, that NATO standing naval forces facing down Russian naval aggression do not regularly include British naval vessels.

It is also significant at a time when NATO is establishing new contingency forces to respond to future crises that the Royal Navy is not bringing forward the highly capable Landing Platform Dock (LPD) Albion from her current mothballed state.

This is probably due to a lack of sailors and Royal Marines, the very people discarded in their thousands under the SDSR. The folly of that move is now plain to see yet is not a burning issue of great embarrassment for the UK government, which it should be.

The Royal Navy made the error of thinking it had a good hand to play in 2010 thanks to all the new vessels and kit it is now bringing into service. It suffered the most debilitating cuts and national defence was badly eroded. That must not happen again in the 2015 defence review.

The highly capable Landing Platform Dock HMS Albion. She was withdrawn from service and mothballed as part of the 2010 coalition government defence cuts. Photo: Dennis Andrews. 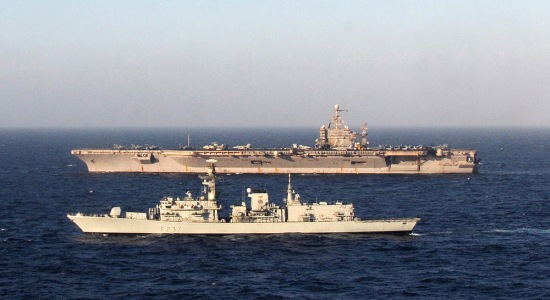 US Navy Leads The Iraq Strike Back