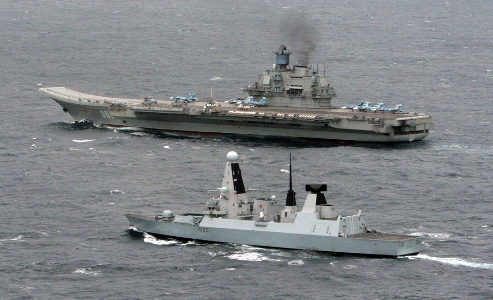 In May 2014, as the Ukraine crisis rumbles on, the destroyer HMS Dragon shadows the Russian carrier Kuznetsov in the English Channel.

In the immediate aftermath of the Berlin Wall coming down in 1989, signalling the political end of the Cold War, there was a brief period of two years when the military standoff was ostensibly continued.

Even so, a process of dismantling the forces that had maintained the East-West face-off began with almost indecent haste.

In the UK, for example, the rush to harvest a so-called ‘peace dividend’ saw defence cuts scythe slice deep into the Royal Navy’s order of battle, with dozens of vessels immediately earmarked for disposal.

Just over ten years later the British navy was half the size it had been in 1990/91. Seeking further economies, the Labour government imposed cuts in 2004 that eroded the fleet. Six years later the Con-Dem coalition continued the process of reducing the RN, such that today it is a third of the size it was at the end of the Cold War.

Events in the Ukraine and Crimea now show the period 1989 – 2014 was not an end to serious confrontation between Russia and the West. It was an extended pause while the Kremlin got its house in order and brooded over the West encroaching into its ‘near abroad’ buffer zone (by taking former Russian satellites countries into NATO and even the European Union).

In the wake of the Crimean annexation this year, the popular view became that President Putin had eastern Ukraine in his sights.

Yet, it was surely a situation forced on the Kremlin rather than part of a long-planned power play? It was an emergency caused by a revolt on the streets of Kiev that was badly handled by the then Ukrainian leader who, to Moscow’s horror, fled the country rather than standing his ground.

Even so, what is amazing is that the flat-footed West did not envisage such a scenario, for Russian President Vladimir Putin does have form with respect to military adventures.

In 1999, shortly after taking over from Yeltsin, he launched a devastating, all-arms blitzkrieg on Chechnya that destroyed the city of Grozny (allegedly killing thousands of ethnic Russians).

In 2008, using a combination of land, air and naval forces (and possibly cyber-attacks) on the Georgian military he effectively annexed part of Georgia.

In 2011, NATO deposed the Russian client regime in Tripoli, with the Europeans applying a carefully calibrated level of military power (commensurate with their reduced capabilities yet not without decisive American help). 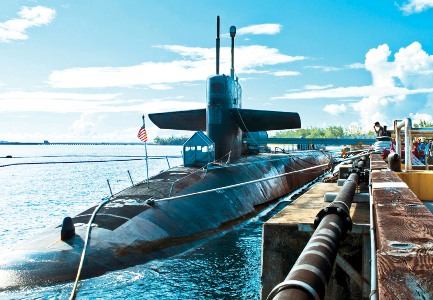 A powerful counter to Kremlin ambition & aggression: The Ohio Class guided-missile submarine USS Georgia pierside during a crew exchange at US Navy Support Facility Diego Garcia (so the SSGN can remain on deployment). Photo: US Navy.

This Western win filled Putin with resolve not to gift NATO another easy victory, such that when a rebellion broke out in Syria – a key Kremlin ally since the 1960s – Russia worked hard to ensure there would be no similar NATO action against the Assad regime.

Ships of the Crimean-based Black Sea Fleet (BSF) have maintained a steady shuttle of arms and advisors into Syria via the Russian Navy base at Tartus, an operation sustained from Sevastopol throughout the annexation crisis.

However, for President Putin, despite all the rhetoric, the Ukraine is a sideshow, even though it is one where Russia can make noises and frighten the West.

Russia would gain little economically by trying to absorb the eastern Ukraine, although, as pointed out in the May edition of WARSHIPS IFR, gaining guaranteed access to the aircraft carrier construction skills of the Nikolayev yard might be useful aim.

President Putin’s over-arching intent for some years has, in fact, been that his nation should dominate the High Arctic and seize its vast oil and gas resources.

This is because Putin believes Russia should be treated with respect as a superpower whose word and deeds matter – and that needs oil and gas.

Russia’s existing oil and gas reserves are soon to reach the peak of their production capabilities before an inevitable decline sets in. To offset the economic implications of that Russia needs urgently to access new energy sources (for home consumption and to sell abroad).

Readily accessible reserves are beneath the Arctic Ocean in the area of the Lomonosov Ridge, which is why naval, air and land forces are being built up in the Russian far north. They are becoming more assertive down as far as waters off Norway and the UK.

President Putin understands the important role played by naval forces in the application of political power, something that is today lacking in the West. The Crimean annexation was, if nothing else, about securing the strategic naval base at Sevastopol.

It is Russia’s gateway to the turbulent south and also for projecting power westward into the Mediterranean, where the US Navy threat (from Moscow’s point of view) is growing via forward-deployed Anti-Ballistic Missile (ABM) destroyers operating from Rota in Spain.

The Northern Fleet, based in Kola and in the White Sea, is receiving massive investment, and new Russian surface combatants and submarines are to be base ported in the Black Sea. By stark contrast European leaders collectively seem no longer to put a premium on wielding naval power in deterring and countering aggression by other states. 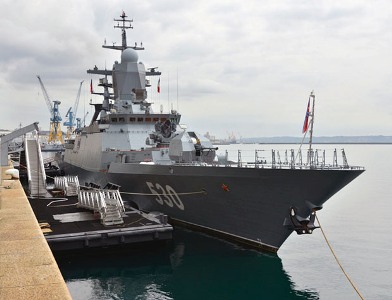 One of the Russian Navy’s new corvettes, possibly soon to be based in the Crimea. Photo: Russian defence ministry.

They have deployed naval task groups in support of the counter-piracy and anti-terror campaign off (east and west) Africa and into the Indian Ocean, but that’s about it in recent years (although France and the UK have been more active together or individually, often in concert with the USA).

The main military response to the Ukrainian crisis from the West initially was deploying a few more fighter jets to the Baltic States, and talk of reinforcing ground forces in Poland. NATO belatedly deployed boosted naval forces into the Black Sea, the Baltic and also the Atlantic.

Sending jet fighters to the Baltic and bucking up ground forces from Moscow’s point of view showed weakness and an inability to act. The Russians will never be scared of Western ground forces or worried by air power, as neither will ever be used aggressively by NATO within the Kremlin’s orbit. That would mean WW3 has broken out. And Russia is never going to send its (still) massive armoured formations to invade, or air forces to bomb, NATO countries.

The primary zone of confrontation, where the West truly can face down the Russian menace, is not going to be the continental Central Front, with massed tank and infantry formations, backed by land-based air forces. The line of confrontation, where Putin’s ambitions can be kept in check, is out there on the oceans under which lie the natural resources Russia wants to exploit.

During the Cold War the most active, and on a daily basis most dangerous game, was at sea, not in Central Europe. That was because, while hidden from most people’s view, it was the most decisive.

Russia has always been scared of Western maritime power, right back to the days of the Tsars. It is via international waters that powerful naval units can place themselves close to Russia, in order to deter aggression and show Moscow there is a limit to what it can do.

Before Russia had major ports, and naval bases, it was a beached whale, stranded in the Euro-Asian vastness, with its blowhole blocked. It had no power in the wider world and was an inward-looking, hermit empire. Murmansk (in the Arctic), Archangel (and the White Sea), Sevastopol and Novorossisk (Black Sea), Kronstadt and Kaliningrad (Baltic) Vladivostock and Kamchatka (Pacific) remain places of utmost historical, spiritual and strategic importance.

For they are Russia’s best guarantees that it can never be completely surrounded and suffocated by the West as well as providing assured access points to global power. Therefore, to make Putin feel pressure the West must be at sea, everywhere and all the time with its naval forces, deploying above all Carrier Strike Groups (CSG), including (and in addition) to singly deployed frigates, destroyers and nuclear-powered submarines.

These are the very units that generals and air marshals in Britain, for example, have repeatedly questioned the worth of over the past 20 years. The generals and air marshals are required to undermine the navy in order to hide the limitations of their own forces. Fighter jets bomb things or shoot other fighters down. Soldiers kill people or deliver humanitarian aid and disaster relief (with a dash of peace-keeping on the side).

Warships can do all of those things – or act as sea bases for them to be carried out. However, their mere presence on the ocean – out there doing business in great waters – also underscores political will, enables claims to territorial rights and natural resources, shows that there is rule of law on the highs seas, plus ensures trade flows securely.

It’s worth stressing again that all those capabilities are above and beyond the war-fighting roles of naval units and their usual tasks other than war. They can exert this multi-layered effect without added expense, dangerous and vulnerable land commitments or extra financial penalties.

Even today, post-Crimean annexation, retired senior army officers strain to impose old-fashioned post-Cold War strategic outlook on the UK via suggestions of an extra army brigade based in Europe, which will have little or no effect on the Kremlin.

The British government and others in the West need to wake up to a salient fact other regions of the world, most notably Asia-Pacific, have already hoisted inboard: This is an era of grand maritime strategy and geo-politics that requires massive investment in naval forces way above and beyond the paltry levels currently seen in Europe. 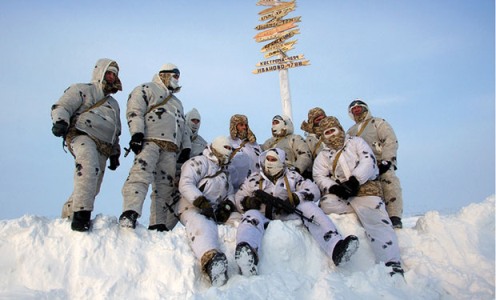 Russian troops pose for a snap in the Arctic. Photo: Russian defence ministry.

Crimean Steal of the Century