Iran engaged in dangerous brinkmanship this month (Jan), ordering the United States Navy to keep a strike carrier out of the Gulf, creating a crisis that threatened war in the Strait of Hormuz, through which up to 40 per cent of the world’s vital oil supplies pass.  America and her allies responded a fortnight later by sending a Carrier Strike Group – the USS Abraham Lincoln – accompanied by the Britain’s HMS Argyll and France’s La Motte Picquet (both frigates) through Hormuz, meeting no opposition. By late January in fact three American CSGs were within striking distance of Hormuz. The British decided to bring forward deployment of the new Daring Class (Type 45) destroyer HMS Daring to Arabian waters, and a third Royal Navy surface combatant, the frigate HMS Westminster also deployed for points East of Suez. The UK already had four mine warfare vessels forward deployed in the Gulf, supported by a Bay Class multi-purpose support ship.

The Iranian warning against Western naval forces was delivered at the conclusion of Iranian military and naval exercises, during which Russian-origin Kilo Class submarines were sent to sea, with new Anti-Shipping Missiles (ASMs) test-fired not only by Iranian naval craft but also launched from the shores of Hormuz. At one stage an Iranian maritime patrol aircraft shadowed the USS John C. Stennis, the current on-call USN carrier in the Gulf region. Having just a few days earlier launched the last carrier mission in support of US troops as they withdrew from Iraq, the Stennis and her accompanying escort ships sailed through the Strait of Hormuz during Iran’s well-publicised air, land and sea manoeuvres. Once Stennis was in the Arabian Sea the head of the Iranian army, Major General Ataollah Salehi declared: “The enemy’s carrier has been moved to the Sea of Oman because of our drill. I recommend and emphasise to the American carrier not to return to the Persian Gulf.”  The general also said, again according to the state-run news agency IRNA: “I advise, recommend and warn them over the return of this carrier to the Persian Gulf because we are not in the habit of warning more than once.”  However, the USA not only reinforced the Stennis with the Abraham Lincoln, but the USS Carl Vinson was soon also in the region, the three carriers for a short time providing more than 200 strike jets in range of any trouble.

The timing of the Iranian exercises – coming as America no longer had an urgent need to place a strike carrier in the Gulf to support troops in Iraq – was extremely interesting. Prior to Desert Shield and Desert Storm in 1990/91, the major operations to first contain Iraq troops in occupied Kuwait and then evict them from the emirate, it was not normal USN practice to have a strike carrier in the Gulf. They were occasionally sent in, such as during major naval clashes with the Iranians during the late 1980s, but otherwise would loiter on the so-called ‘Camel Station’ in the Gulf of Oman. The Iranian moves in 2011 also coincided with statements by leading American naval officers that the main operational focus for the US Navy is now Asia-Pacific. A decision by President Obama not to commit a strike carrier to action in Libya was, some might say, a further indication to the Iranians that American resolve in the Middle East might be weakening. Only last year the Iranians sent a frigate and naval tanker to a Syrian port and held discussions with senior officials about establishing a naval base on the eastern shores of the Mediterranean. Not only that, the increasingly confident Iranian naval forces have even proposed sending warships to patrol the Atlantic. An Iranian admiral said last year that planned long-range deployments to the Med, Indian Ocean, Atlantic and elsewhere will involve ships armed with Noor cruise missiles, which have a range of 125 miles. Last June the Iranian Navy’s Kilo Class submarines, which have not seen a lot of sea time since being procured in the 1990s, were deployed outside the Gulf for the first time, venturing into the Red Sea. Further boosting Iranian confidence was successful acquisition of an American stealth drone, captured intact when it malfunctioned during a spying mission over Iran. Despite the declining US military presence on land in the Gulf, there has in reality been no sign of faltering naval commitment to the Middle East and supporting troops in Afghanistan. There remain serious strategic stakes, not least in terms of damage to the world economy that would be caused by closure of Hormuz. The majority of the up to 15 super tankers passing through the Strait on a daily basis are headed to Japan, China, India and South Korea – the workshops of the global marketplace – as well as the USA and Europe. An equal number of empty tankers pass through in the opposite direction to load up at the various oil terminals scattered the length of the Gulf. The UK relies a great deal on Liquefied Natural Gas (LNG) carried by massive ships through Hormuz, with at least 50 per cent of British national gas requirement supplied via shipping lanes from the Gulf. The Strait is 34 miles wide at its narrowest point, but the shipping corridor used by tankers and LNG carriers is only six miles broad. Heightening tension in recent weeks have been Western moves towards stiffer trade sanctions on Iran in response to its continued alleged pursuit of nuclear weapons. The civilian head of the US Department of Defense (US DoD) Secretary Leon E. Panetta has made crystal clear Iran will not be allowed to become an established nuclear-armed state. During a press briefing late last month (Dec), Pentagon Press Secretary George Little stressed Mr Panetta believes “an Iran with a nuclear weapon is unacceptable. That’s a red line.” 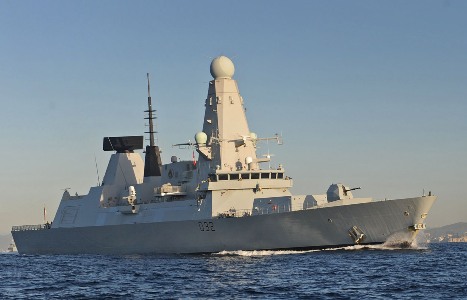 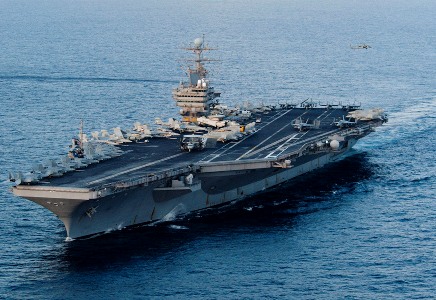 The US Navy strike carrier USS Abraham Lincoln prepares to pass through the Strait of Hormuz in Class in company with Allied naval forces.  Photo: Will Tyndall/US Navy.