SHIPS AT SEA – NOT BOOTS ON THE GROUND 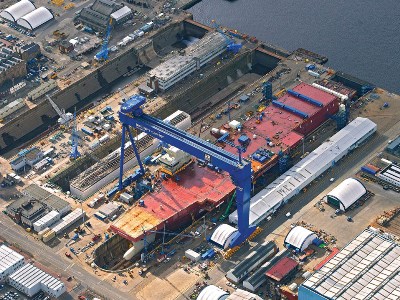 It is 125 years since the poet Rudyard Kipling coined the phrase ‘East of Suez’. It was a phrase that entered British overseas policy as encompassing, obviously enough, anything east of the Suez Canal. It included a vast military base in Singapore, which even though it failed in the Second World War, was still a beacon of British commitment.

In the early 21st Century long gone are the days when peace and stability in the Middle East, and over a wide area of the Indian Ocean, was guaranteed by a tiny British presence (such as a frigate and a squadron of landing ships based at Bahrain). Gone too, are the days when, as happened in 1961, the presence of a British task group in the Middle East prevented a war.

Today, even though it is more than 40 years since a financial crisis in which the pound was devalued – and in a fit of retrenchment government ministers announced that British forces would be withdrawn by 1971 from East of Suez – there are still remnants of Britain’s worldwide power in the region.

The Royal Navy presence has peaked from time to time (in 1991 for Desert Storm and in 2003 for the invasion of Iraq, for example) and there has been an Armilla Patrol (protecting merchant ships, especially in the Strait of Hormuz) almost continuously since 1980.

There are still British warships patrolling the Gulf or on anti-piracy patrol in the Indian Ocean. Until 1997 there were significant British forces based in Hong Kong. Even in the wake of the Strategic Defence and Security Review (SDSR) there is still a jungle warfare school, a battalion of Gurkhas, and an Army Air Corps flight in Brunei. There is a UK military presence on Diego Garcia (which remains a British base though used extensively for strategic purposes by the USA rather than the UK) and a fuelling facility at Singapore manned by the Royal Navy.

There has also, of course, been a significant British presence on land in Afghanistan since 2001, which includes a massive military base at Camp Bastion. British maritime aviation units also operate out of the southern Arabian Peninsula.

On a broader scale the Five Power Defence Arrangements (FPDA) under which Britain, Australia, New Zealand, Malaysia and Singapore have agreed to defend their mutual interests has to an extent, ameliorated the policy of an end to a presence East of Suez. It is an agreement that unfortunately Britain has so far only paid lip service to.

Regardless of British defence retrenchment imposed by SDSR there is an arms race in the Gulf and in the Indian Ocean (particularly in the naval sphere) and also around the South China Sea (ditto). The major players are the USA, China, Japan and India with Australia, South Korea, Singapore, Malaysia, Saudi Arabia and Indonesia rising second rank maritime powers.

The Iranians are keen to project power further afield – even into the Atlantic – while their foes the Israelis are suspected of harbouring a plan to place submarines as a counter in the Indian Ocean. France has never given up its low-key naval presence East of Suez and has support facilities in both the Gulf and the Indian Ocean.

This is clearly a radically different – and potentially even more turbulent – arena over which the Royal Navy (and therefore Britain) held sway until 1971. Yet a Britain with much reduced maritime power is today in somewhat of a dilemma, for it has growing, not diminishing interests East of Suez. These can be summed up as follows: Trade between the UK and the UAE including inward investment in the UK (worth tens of billions); a British expatriate population in the Gulf exceeding 100,000 and regular (and strategically important) Liquefied Natural Gas shipments.

Qatar is Britain’s prime supplier of LNG and is also, de facto, a store of the UK’s strategic energy reserves. Without them, Britain would plunge into an energy and economic crisis. Prime Minister David Cameron has been inclined to make policy on the hoof but there are signs he is also growing more statesmanlike, which is demonstrated by what appears to be a new East of Suez strategy. British policy might seem to be about to undergo a sea change.

A recent paper published by the London-based think-tank RUSI outlines apparently compelling reasons for such a departure from existing policy. In a foreword to the paper, Professor Michael Clarke suggests the British military ‘intends to build up a strong shadow presence around the Gulf; not an evident imperial-style footprint, but a smart presence with facilities, defence agreements, rotation of training, transit and jumping-off points for forces that aim to be more adaptable and agile as they face the post-Afghanistan years from 2014.’ Clarke calls this ‘smart deployment’ and asserts ‘the Minhad airbase at Dubai in the United Arab Emirates (UAE) has emerged as the key to this smart presence.’ Clarke adds that ‘more will be heard about it, alongside the Typhoon [fighter jet] deal with the UAE, in the near future.’

Clarke says that using Minhad means the UK military ‘does not intend to “deploy” to the Gulf in any significant way, but it hopes to create the facilities to rotate back and forth; to pass through; to jump off.’ Actually the Army has gone rather further than that. Its chiefs, in their search for a role for their Service after Afghanistan, are thinking that two battalions might be based in Minhad and that two brigades might train in the Middle East and form ‘close tactical links’ with countries there. This means a switch from a huge base in Afghanistan to another one in Arabia. It is all nonsense, of course and more reflects self-serving Army desires for a future rationale than any wise UK national strategic move.

Any deployment – smart or otherwise – would depend on host nation support and overflying rights, which could be withdrawn at any moment. To place an Army garrison permanently in the Gulf would create the same huge force protection magnet that Camp Bastion has and lead to a similar strategic dead end. It would, in short be a target, and weaken the host nation rather than strengthen it.

The way forward is simple – and it is a means of exerting influence, power and safeguarding vital strategic interests while avoiding the error of a permanent presence of boots on the ground. The Americans know only too well how that plays into the hands of their enemies, and those of the Gulf regimes by creating a rallying point for Jihad. That’s why the US Navy is the primary forward-deployed force – in international waters – with boots on the ground only when absolutely necessary.

There are naval support facilities, but by their very nature (on the coast) they are low visibility and peripheral. Following the Iraq War and Afghanistan no American President is going to order a large military presence on land in the Gulf, so why would Britain? In summary, the way forward for Britain with its new East of Suez policy is a case of back to future. Remember when in 1961 a British task force consisting of Royal Marines in HMS Bulwark, with support from the strike carrier HMS Victorious (and accompanying destroyers, frigates, landing ships and minesweepers) prevented a war in the Gulf? The marines landed in early July and had withdrawn by mid-October.

That was a smart deployment and it is what Britain should prepare to do with its new aircraft carriers, the future HMS Queen Elizabeth and HMS Prince of Wales. When the troops come home from Afghanistan, it should be the end of an aberration in British defence policy that has seen years of involvement in an ultimately unsuccessful land-based strategy. In the future Britain must revert to its traditional (and successful) maritime strategy, or it will face more years of lost lives, wasted treasure and increased, rather than reduced, strategic risk. 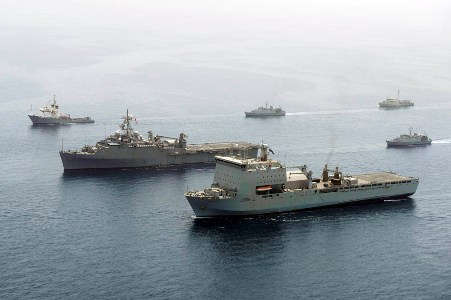 Today: During IMCMEX 2013 in the Arabian Gulf, several key vessels gather, including the UK’s Royal Fleet Auxiliary (RFA) Cardigan Bay (nearest) and the USS Ponce (cruising alongside the British vessel). Photo: US Navy.

“THE NORTH KOREANS SIMPLY NEED TO DIAL THE TEMPERATURE DOWN”