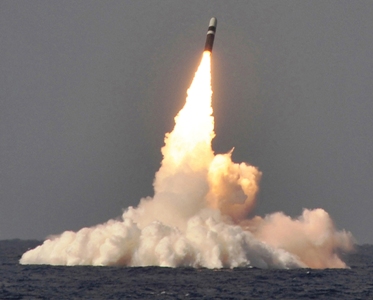 The referendum vote by the majority of the residents of Scotland to stay in the United Kingdom deflected the need for the national strategic deterrent to relocate elsewhere in the British Isles.

The prospect of an anti-nuclear independent Scotland telling the Royal Navy to remove its four Vanguard Class ballistic missile submarines (SSBNs) and seven Astute Class attack boats (SSNs) from the purpose-built naval base on the Clyde was very real.

It caused such great concern among retired senior naval officers that former First Sea Lords warned of the cost, chaos and strategic disruption the removal of the deterrent from Scotland would cause.

Retired First Sea Lords Alan West, Jonathon Band and Mark Stanhope were among 14 senior officers from all three armed services who put their names to an open letter to the people of Scotland, published in a national tabloid newspaper.

They warned: ‘The division of the UK may or may not be politically or economically sensible, but in military terms we are clear: it will weaken us all.’

In another letter, this time to a broadsheet newspaper just before the mid-September vote, Lord Boyce, Sir Jock Slater – also former First Sea Lords – and Vice Admiral John McAnally, joined the other admirals in warning: ‘Scottish separation will entail many lost jobs and leave Scotland very poorly defended in an increasingly dangerous world, especially as the SNP’s [Scottish Nationalist Party’s] policy on nuclear weapons could render it ineligible for NATO membership.’

Planning at a government level for a Plan B, should the deterrent force have been told to leave Scotland was not, so it appears from various sources, even contemplated for fear of SNP wish fulfillment.

In the absence of any serious proposals from the Navy or the Government two academics wrote a paper for the Royal United Services Institute (RUSI), a London-based think-tank, entitled ‘Relocation, Relocation, Relocation – Could the UK’s Nuclear Force be Moved after Scottish Independence?’

According to authors Hugh Chalmers and Malcolm Chalmers, the answer was yes, but at some cost in time and money. In their conclusion, they wrote: ‘A potential alternative to HMNB Clyde would involve relocating the submarine support functions of Faslane to HMNB Devonport and replicating the munitions-support functions of Coulport from scratch on a greenfield site north of Falmouth.’

Their report went on: ‘Previous work undertaken at HMNB Clyde in preparation for the current Vanguard-class submarine suggests that this relocation plan could cost between £3 billion and £4 billion (gross, at 2012/13 prices), not including any costs associated with land purchase and clearance of existing buildings at the new munitions-support facility. Some of these relocation costs could be funded by the cancellation of planned upgrades to HMNB Clyde to prepare it for a successor to Vanguard.’

The need for such a gargantuan relocation to England has been avoided, for now. With discontent after the post-vote settlement, and SNP membership leaping while that of Unionist parties falls, the betting is another independence referendum in a decade or so.

Next time it will be prudent for the Westminster-based UK government to have a Plan B rather than act in a recklessly cavalier fashion with the strategic national defence.

A Trident II D-5 ballistic missile, similar to those deployed in British SSBNs, is launched from the Ohio Class submarine USS West Virginia during a test on the Atlantic Missile Range. Photo: US Navy.

The first of the UK’s new Trident ballistic missile submarines, HMS Vanguard, arrives at Faslane in the autumn of 1992. Might the UK’s deterrent force still get its marching orders from Scotland? Photo: Iain Ballantyne.

The Royal Navy Cannot Rest On Its Laurels