REAL STEEL NEEDED EVEN IN THE CYBER WARFARE AGE 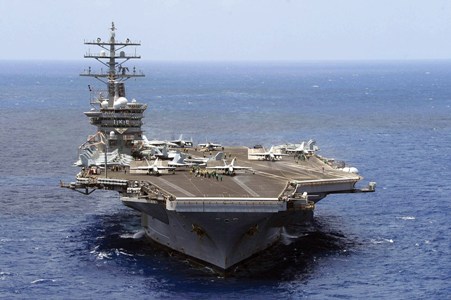 Politicians love cyber warfare. Investing in the means to wage it and counter it affords them the ability to shake up what they see as the ossified military. They can discard the hardware so beloved of top brass and hire geeks and boffins to do something really cool. Boosting the cyber side of Defence enables the politicos to look cutting edge and down and dirty with the kids.

They can use flow charts and power point presentations to sketch out an alarming inter-connected global landscape of cyber warriors and cyber espionage agents battling terrorists and trolls.

Warships, tanks and jet fighters are not so cool. For the politicians and their advisors they represent the ugly side of warfare, in which they have to order their people to go and kill another government’s people – or terrorist organisation operatives – and in a most unpleasant fashion.

They are also very expensive to build and maintain. They are the playthings of a breed (the Armed Forces) whose ways and means are inscrutable for the average politician, at least in the West outside the USA. How exactly warships, for example, operate and what they do is all a bit mysterious. Sea control, Defence Diplomacy, ‘presence’, not forgetting all that inconvenience of training for war, is not easily understood by young men and women whose world has solely been Oxbridge and a PPE degree followed by career Politics. They would rather wage war via overseas aid and using a computer.

That’s the cynical, curmudgeonly view of it. The reality is that the cyber threat is growing radically as the world comes to rely more and more on computers for even the most mundane of tasks. The head of the American military has joked that even his toaster will soon be sending tweets.

It was his way of making light of a very dark reality. Sustained cyber warfare is already being waged across the globe as nations jockey for control of…control of what? Well, actually, the tangible, real things which constitute our planet, such as mineral and energy reserves, not forgetting control of the oceans upon which the vast majority of human trade still travels. The Chinese may well be the leading exponents of cyber warfare, and it appears they have even been seeking to gain the secrets of American warships via cyber espionage.

They are also building a huge navy of real steel warships. Beijing is sending its people into Africa so it can control that continent’s vast untapped resources to fuel the Chinese economy, for if the latter falters then millions of people will be made redundant.

That way leads to strife and the toppling of the communist regime. Just look at what happened in Egypt. The religious zealotry of the Morsi administration meant it failed to fix the economy, so the Army (responding to a popular uprising) sent its tanks and troops onto the streets to topple the President.

To reassure the people that the military was on their side, air force fighter jets swooped low overhead, trailing multi-coloured smoke, not dropping bombs.

Of course the aftermath is not so easy to manage, nor bloodless, but the Egyptian coup d’etat was executed in exemplary fashion.

Turning to the UK, while it is true that its cyber threat is rising, let’s not forget Britain is also utterly vulnerable to disruption of its gas and oil supplies, which nearly all come by ship to British shores. Seventy years after the Battle of the Atlantic, the UK also still remains reliant on overseas food imports.

Whatever needs to be done in this world, whether staging a coup, protecting shipping lanes and trade – or establishing hegemony over Africa and the oceans between it and China – hardware and highly trained warriors are essential. Not just cyber warriors, but real flesh and steel. Service personnel must be ready and willing to go out there and fight the threats face-to-face and even hand-to-hand. By all means invest in the cyber warfare capability, but it is just one aspect of warfare, not a substitute for proper forces.

Epitome of real steel in the modern world: The US Navy aircraft carrier USS Dwight D. Eisenhower. Photo: US Navy.

IS THIS THE END OF WESTERN NAVAL SUPREMACY?