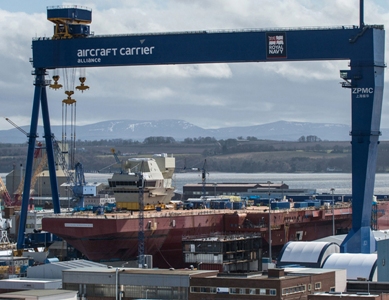 One hundred years ago workers in Portsmouth Dockyard were racing to complete a mighty ship of war named Queen Elizabeth, potentially the most powerful naval vessel ever constructed in Britain.

Lead ship in a new class of five super dreadnoughts, the future HMS Queen Elizabeth was cutting edge. Using oil to fuel her boilers (and so provide unprecedented sustained speed for a battleship) she was to be armed with 15-inch guns that were the first of their kind to ever be mounted in a capital ship.

First Lord of the Admiralty Winston Churchill worried that, when it came to sea trials and gunnery tests, Queen Elizabeth and her sisters would be found wanting. Their guns might explode and the oil-fuelled propulsion may prove inadequate.

There was no time to redesign the vessels, as across the North Sea the Germans were constructing a battle fleet to rival, and even exceed, Britain’s. Fortunately the naval-industrial complexes of Britain, all the way from the gunnery workshops and forges on the Tyne to the naval dockyards in the south of England, were well practiced at turning out warships against the clock.

They were absolutely confident these new vessels would deliver their promised capabilities. The super dreadnoughts would not fail. Churchill, and indeed the whole nation, was painfully aware of the necessity for the new wonder warships and knew exactly what they were for.

The Queen Elizabeth Class would be wielded with dexterity and lethality by the mighty Royal Navy, which had ruled the waves without any serious challenge since Trafalgar in 1805. They would form a fast division of battleships, heavily armed to smash the Kaiser’s fleet to smithereens and preserve British control of the seas across which the nation’s life blood trade flowed. An outward looking nation, with its eyes on the far horizons beyond just Europe, had total faith in the Navy. It was, after all, the Senior Service.

Today dockyard workers at in Scotland are undertaking the still considerable challenge of completing the new Queen Elizabeth, which was christened at Rosyth by Her Majesty the Queen on July 4. Like the Queen Elizabeth of a century ago there are lingering doubts in some quarters about the main offensive weapon. The F-35B stealth fighter is a very expensive, complex STOVL aircraft that some suggest is outclassed by cheaper, already operational, Chinese and Russian jets. There is disquiet about the Navy not totally controlling the air squadrons that will fly from the super-carrier, for the land-based RAF has deeply embedded itself in the programme (which seems against the very laws of common sense, bearing in mind past events).

There are many innovative aspects to the new Queen Elizabeth, though a decision to use the Electromagnetic Launch System (offered by the US Navy) and fly the cats and traps variant of the F-35 (rather than the less capable STOVL version) was cancelled.

The British government played it safe – going back to the original jump jet carrier design of ship – but increased risk in other ways. It lessened the flexibility of the vessel to also embark US Navy F-18 Super Hornets (or F-35Cs) and French Navy Rafales, or even British variants of the Hornet should the F-35B fail catastrophically and cost way beyond what the UK can tolerate.

The Hornet would enable the UK to have a full-scale working strike carrier capability by 2020 (or sooner), rather 2030. The jump jet decision also means the UK cannot keep on the leading edge of offensive naval drones as the most likely candidate (the US Navy’s X-47B) is a cats and traps aircraft.

A relatively cheap, easy solution for Airborne Early Warning and Control aircraft, such as the proven Hawkeye (used by both France and the USA) is also not an option. Instead the British must go for the second best option of conjuring up an AEW variant of the Merlin helicopter.

So, compared with the daring gamble Churchill took a century ago with the Super Dreadnoughts – pushing the envelope on all sides – the British have already compromised their vision in several ways. But what is done, is done and at least the UK can start to remedy the strategically dumb decision to have a strike carrier gap between 2010 and 2020.

The truly decisive phase of the British super-carrier programme actually starts now: Bringing the ship through completion into sea trials, then embarking aircraft and getting worked up for operations. Normally there will only be 12 F-35s embarked (which is a bit like the old Queen Elizabeth leaving six out of her eight 15-inch guns behind in port).

To field a full air group of 36 jets the Navy will have to rely on the good graces and operational availability of the RAF’s share of the F-35B. Bearing in mind the play dirty, ruthlessly political attitude of the RAF – which will always prefer to fly from land as that is where its power base lies – this may result in non-availability?

However, all this is to be worked on by a determined First Sea Lord and Naval Staff. They will no doubt do all in their power to ensure two super-carriers are ultimately commissioned and that the ships can embark the sort of air groups that will make good on the massive investment of taxpayers money.

And there’s the rub, for the biggest battle faced by the Royal Navy and the Ministry of Defence will be convincing the British public of what the new ships are for (not easy when the full capabilities cannot be exploited and demonstrated for some time). Unlike a century ago, there is no clear understanding of the worth of the Queen Elizabeths among the wider public, only that they have cost a lot of money.

You can use all the gibberish ‘corporate’ fancy talk you like, but in the end what the British public wants – and every man, woman and child must be reassured the new ships and their air groups can truly provide – is proper defence of a kind only offered by capital warships.

Essentially the Queen Elizabeth and sister vessel Prince of Wales have been created for the same reason as their super dreadnought predecessors: To first of all protect the nation by deterring enemies from attacking Britain and her interests. Should a likely foe make a rashly aggressive move, the carriers (along with their attendant destroyers, frigates and submarines) are to destroy the enemy’s capacity to act (either via directly inflicted violence or strangling the foe’s ability to wage war).

They can, in addition to precise and proportionate, state-sanctioned violence, also achieve this via a blockade or embargo actions. Or just via the mere threat of force projected from international waters.

The super-carriers must demonstrate they are ready to do this as soon as possible in the dangerous world in which their services are badly needed. The era of long-term, imperialistic adventures ashore of a kind that Britain has never specialised in with any success – along with the idea that wars can be won (or deterred) by land-based air power alone – is over and done with. This is the era of the super-carrier.

Top – The new Queen Elizabeth under construction at Rosyth.

The super dreadnought battleship HMS Queen Elizabeth in the 1920s. She served the UK in two world wars. 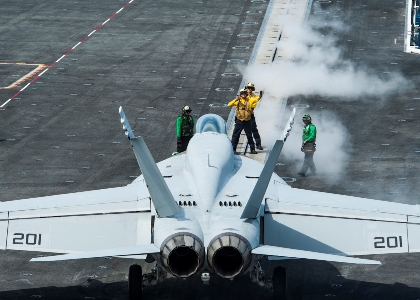 The UK changed direction for a ‘Cats and Traps’ carrier in 2010, but then reversed that decision and went back to the STOVL option, something regarded as an error in some quarters. It means the UK cannot opt for the (cheaper and already combat proven) Super Hornet (one of which is seen here about to launch from a USN ship).