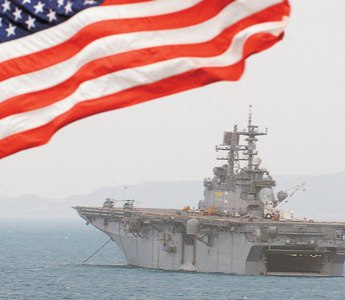 Two cases illustrate the old maxim of ‘act in haste, repent at leisure’. One is the fashion in which since the 1982 Falklands War the British have shed most of their maritime defence layers. It has left their nation with a malformed naval structure that on its own can obliterate the planet but (again on its own) deters very few potential foes, if any. As we consider in this edition, Prime Minister David Cameron spoke recently about the future Royal Navy having a huge punch, in one stroke revealing his critical failure to understand the nature of deploying sea power, which is not solely about hitting power. It is as much about deterring an enemy with presence and passive coercion, preventing wars from starting in the first place, than laying waste to places via strikes from the sea. Our second case concerns the Congress of the USA, which has been criticised by Leon Panetta, the civilian boss of the Pentagon, for placing a gun at the head of the American nation. Having devised a carefully constructed money-saving defence review, which preserved the maritime forces so crucial to countering future global threats, the US Department of Defense now finds the politicians are squabbling over where and what level of cuts should be approved (more trimming in Defense or Welfare?).

It means a process of Sequestration will automatically kick off in January next year, heralding massive cuts to get the national deficit under control. These will be across the board and impose more severe trimming on the military than planned for. Warships will be (potentially) immediately taken out of service, submarine and carrier construction suspended. The F-35B strike jet (needed for the US Marine Corps to field a future air arm) may be axed altogether. This is the aircraft the UK may, or may not, go back to if it cannot find a couple of billion pounds savings necessary to modify the second new strike carrier Prince of Wales to a ‘cats and traps’ ship rather than a STOVL platform. So, not only is the USA being held hostage, so is the UK’s future strike carrier capability, not only by the rash moves and indecision of its own politicians, but also by America’s. With all the rising threats in the maritime environment across the face of the planet, and a need for constant vigilance to preserve trade, security, access to raw materials, and even save lives, the very people tasked with safeguarding the defence of the nation(s) seem to be blinkered and lacking in mature understanding of sea power. If the USA is not careful it will begin the process of unilateral naval disarmament the UK has instituted since WW2, and which has accelerated to a dangerous degree since 1991. If there is one thing that has prevented another major global war it has been the American-British naval partnership, via a process of constant vigilance at sea, with multi-layered maritime capabilities. This has since WW2 often provided a graduated response to various crises. Once the carefully constructed naval structure is dismantled, or key elements removed, it creates a situation where conflict is more likely, not less. If American politicians want an example of how that enfeebles a nation’s standing and ability to deter – despite the possession of a few high-end capabilities – they have no finer example than the United Kingdom. Having got rid of its carrier strike power (until at least 2020), hacked its frigate and destroyer force back to the bare minimum, mothballed its multi-role amphibious ships (or sold them off) and reduced its fleet support vessels, Britain is now bereft of the multi-layered, graduated response to potential aggression it once possessed. It has Daring Class (Type 45) air-defence destroyers that cost a billion pounds each and nuclear missile submarines, which are fine in full-scale warfare and if you want to wipe out all life on the planet. The Type 45, in reality a cruiser, is capable of policing roles and deterrent missions, but it is a big (expensive) bruiser, a serious piece of hardware you would not wish to risk in scuffles at sea. Deploying such a ship sends a serious message. However, it allows potential enemies to claim the UK is being overly aggressive. That is exactly what Argentina has done to gain support for its claims on the Falklands, waging a diplomatic and economic war against the UK. Too often the UK’s politicians think in terms of ‘muscle’ and ‘punch’, rather than taking the time to understand (as did their illustrious forebears a century ago) that, actually, naval forces are about presence, about showing the flag, applying the right level of response to avoid escalating a situation. In 1982 a Tory government sent the wrong sort of signals by proposing to weaken the Royal Navy to a dangerous degree. Former Defence Secretary John Nott to this day defends his decision to destroy the balance of the Royal Navy and sell off one of its carriers, going as far in March 2012 as criticising investment in new super-carriers. He recommended large numbers of frigates and destroyers instead, once again demonstrating that the former Army officer still does not understand how naval forces are balanced and inter-related. Any nation that matters must equip itself with carriers (and the task groups to go with them). In the 21st Century all the top players are doing exactly that. John Nott begs to differ, even 30 years on from the Falklands War proving his proposed defence cuts were sheer folly. They have been matched, and exceeded, only by the current coalition government.

The invasion of the Falklands followed Nott’s proposed cuts to the Royal Navy. The only response left then if Britain wanted to uphold the rights of its citizens and show the world such aggression did not work, was to assemble a full war-fighting task force. Hundreds of young men died as a result in a war that need not have happened. Yes, the Falklands are better defended today, but the UK needs to be careful it does not prepare to fight the last war and bring on itself the next one (for which it may not be equipped to win). The only way to do that is to have a range of maritime capabilities on all levels. Argentina is more likely to wage a Cod War-style campaign than an invasion. Who would risk damaging a Type 45 by jostling with Argentine gunboats in such a crisis? Which illustrates that naval critical mass is necessary to both handle commitments properly and sustain losses due to combat or, for example, accidental damage. And handling the Iranian menace to the Straits of Hormuz is at the other end of the scale. Should war come against Iran’s nuclear weapons programme, will the UK have sufficient numbers in sophisticated, highly-capable surface combatants needed to fend of surface, sub-surface and air attacks all at once? One American senior politician has suggested the only kind of warship that would be able to survive a war in the Straits of Hormuz is a submarine. The UK does not have many of them left, either, while there is even concern about declining US Navy attack and guided-missile submarine numbers. Iran, China, Argentina, Brazil and India are among those enthusiastically pursuing submarine construction programmes (the last four seeking to expand their SSN capabilities, too). While the UK has building of the Astute Class underway, it has been both sluggish and expensive and there are simply too few SSNs for the RN’s global tasks.

Sadly, the UK no longer has that critical mass in either capabilities or numbers. Politicians, with their eyes on short-term votes to be gained from spending public money elsewhere, and pouring billions into ill-advised land wars, have discarded a finely balanced navy. Today’s British politicians will no doubt be out of office when the butcher’s bill is delivered in some future war that need not have happened. Flexible and numerous naval forces – and yes with punch if they need it – could prevent such a disaster from ever arising. American politicians need to think very carefully before they too leap into the abyss and wreck the US Navy, and in so doing remove the core deterrent to major state versus state war.

Japan, April 2012, and symbolising Pax Americana that safeguards world security, the Stars and Stripes flies proud, but for how much longer? In the background is the assault carrier USS Bonhomme Richard. Photo: Adam M. Bennett/US Navy.

The new attack submarine HMS Astute arrives at Naval Station, Norfolk, for combat exercises with the US Navy. The UK currently plans to build only seven of the new boats. Photo: Todd A. Schaffer/US Navy.