PLYMOUTH: A CITY RICH IN NAVAL HISTORY BUT POOR IN VISION 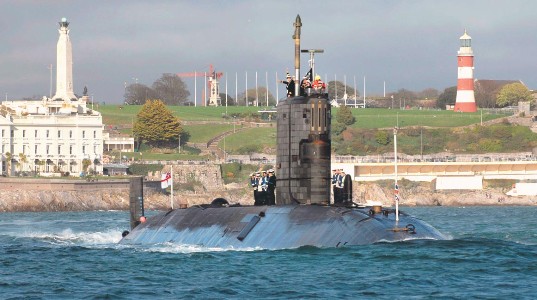 Ian Stockdale lays out the case for a naval heritage centre in Plymouth. He feels it should be focussed on the frigate HMS Plymouth and the submarine Courageous, both of which are veterans of the Cold War and the Falklands conflict.

Plymouth has a long relationship with the Royal Navy, and also the British Army, stretching back hundreds of years. The city and its surrounding area are peppered with the remains of forts, docks and many fine buildings that bear testament to that history. With the exception of Crownhill Fort – one of the so-called Palmerston’s Follies, built in the mid-1800s to protect Devonport’s dockyard against potential French land assault – there is little if any access offered to the general public. Drake’s Island for example – prominently situated in Plymouth Sound and another key part of port defences – has been closed to the public for 17 years after purchase for development as a ‘luxury private hotel’. Despite such rich remains, and there is even more significant real estate at Devonport itself, there is no single place that a visitor to Plymouth or a student of history can go to learn the full story of a remarkable fleet base and ship construction centre. There has, of course, always been the perfectly valid excuse of security; you can’t have just anyone wandering around a ‘nuclear licenced site’ like Devonport Dockyard. Over the last few years the Ministry of Defence and Babcock have retreated into North Yard and various parts of South Yard have been released for development, like the new Princess Yachts facility. You would think that a major maritime heritage element would have been created to take advantage of that access, but that is not the case. There is a ‘portal’ in the Royal William Yard, which opens up a look at some heritage in the naval base and dockyard, and (if you are lucky) a visit to a modern warship and also the submarine Courageous exhibit. This is still very much by appointment, booked well in advance. While worthy, it barely scratches the surface and the majority of Plymouth’s naval heritage remains untapped. There is still a significant amount of land, property and waterfront disused at Devonport but not released. With the continuing shrinkage of the Royal Navy, and indeed all of the UK armed forces, will the active fleet ever need this land again? Many of the buildings and docks are listed to Grade 1 level and therefore unsuitable to the needs of today’s dockyard. There is little that can be done to modernise them. So, if it can’t be changed, why not make use of it the way it is? You need look no further than Portsmouth to see the potential benefits of a ‘historic dockyard’. Chatham also seized the opportunity after the closure of its ‘Royal Dockyard’, which now has a world-class naval history attraction. Both places have – and this is key – warships and submarines as the headline attractions to draw people in. For some reason Plymouth has never fully embraced its maritime (and specifically naval) heritage. Of course there’s the City Museum but surely a history that stretches from the exploits of Drake to the sad fate of Scott (both city boys) and beyond needs more? Plymouth after all built ships by the dozen, if not the hundreds, including those that fought at Trafalgar and Jutland. It seems to have forgotten the massive enterprise that it undertook, playing a key role in making Britain a great power. There are a few memorials and other fragments about the place, but no focus, nothing to draw people in with proper public access.

The excuse of those who feel it isn’t worth trying is: ‘It will cost too much and we won’t get any benefit’. Again, look to Portsmouth and its vibrant waterfront and dockyard. The cafes and shops close to the historic dockyard are invariably heaving and there’s always something going on. So what’s the difference? One major problem is the perception that the Navy is more committed to Portsmouth as its ‘home’ than Plymouth. That undermines confidence. Portsmouth also has ‘The Museum of the Royal Navy’ and the RN has always said it will only fund one Naval Museum. If Plymouth were to have its own, funding would have to come from elsewhere, though the likely audience in the South West of England is surely bigger than Portsmouth’s? There are many more tourists in Devon and Cornwall than would ever dream of going to Pompey. Then there is the case of the contrasting City Councils. Plymouth has flunked the ‘vision thing’ whereas they have seized the day in Portsmouth. They crack on with waterfront developments and also symbolic attractions while Plymouth seemingly embraces only inertia.

The key thing, though, as already mentioned, is to have historic vessels and it is the sorry saga of HMS Plymouth that best illustrates the mystifying maritime heritage antipathy of Plymouth the city. In 2007 plans were drawn up to return HMS Plymouth to the place where she was built, the last surviving warship to have been built in Devonport. The big plans to have the frigate at Millbay came to nothing. To this day not a lot appears to be happening at that key part of the city’s waterfront, which has been verging on derelict for decades (ferry port excepted).

Attention then turned to Commercial Wharf and Elphinstone Quay within Sutton Harbour. Virtually all sectors of Plymouth civic society, the business community and even some maritime heritage parties, poured scorn on the idea, once more presenting an image of negativity to the world.

The group proposing HMS Plymouth’s return never asked for any money and the idea was always to link in with redevelopments to offer heritage plus redevelopment. After all, the world thinks of Plymouth as a proud naval city and expects to find such attractions there to keep visitors busy on a rainy day (and boy do we get a lot of them). The last option for HMS Plymouth in the city was the dockyard’s South Yard and particularly the area around dry docks and basins 1 to 4. The area was still within the dockyard walls but then the land was opened up to public use. Princess Yachts were already part of a beauty parade waiting for the chance to seal a deal on land around the slip where HMS Plymouth was built. The Navy removed Courageous and flooded the two dry docks still closed to the river, removing the caissons. That was the last hope for a combined HMS Plymouth and Courageous attraction (unless someone put up the money to replace the caissons).

Critics are always quick to point out that the former owners of HMS Plymouth, the Warship Preservation Trust (WPT), went bust because the business wasn’t viable. That is not true, for the operation in Birkenhead did in fact break even. Peel Holdings, the landowners of the quay and warehouse complex where Plymouth and other ships were berthed, were pressing ahead with redevelopment into luxury flats and the fleet had to be moved. An alternative site was offered but with no services such as power and water. WPT couldn’t afford to put these services in so was forced into voluntary liquidation, leaving no outstanding debts.

As ever the story of HMS Plymouth was less black-and-white as might appear on first look. The reality is, the one thing that would save the ship would be to get her home to Plymouth and make her the centrepiece of a proper museum and heritage area alongside submarine Courageous. It’s a bold idea, but the opportunity to do so appears to have slipped away with plans to scrap the valiant frigate. It is another typical twist in the sad and sorry tale of a Devon city’s inability to embrace a naval and maritime heritage richer than almost anywhere else on the face of the planet.

• Ian Stockdale is a supporter of the HMS Plymouth Association and a proud Plymothian. In part two of his commentary, in the September 2012 edition, he will set out his ideas for a remedy to his home city’s maritime heritage ailment.

An unrivalled vista: The attack boat HMS Triumph progresses through Plymouth Sound with the Hoe visible behind. 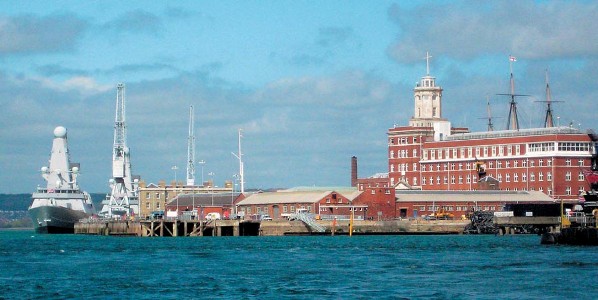 Template for success: The historic dockyard quarter at Portsmouth, where the past, present and future navy co-exist in a viable fashion.