With the London Olympics around six weeks away Dr Dave Sloggett considers the Royal Navy’s role in the detection, recognition and disruption of potential threats. 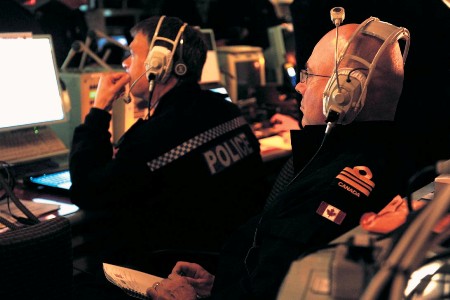 For those trying to ensure that Olympic sailing events in Weymouth Bay are held securely it is the maritime domain that presents some interesting challenges. All of the other Olympic venues are based inland, though the major ones are of course on the Thames. The vast majority of spectators for the sailing events will no doubt arrive by land and occupy key locations on the beaches. Terrorists may, though, seek to approach by sea, aiming to create a spectacular series of incidents reminiscent of the terrorist attack on Mumbai in November 2008. To mount those attacks in India the terrorists travelled over 1,000km by sea. With that possibility in mind the planners involved in securing the sailing sensibly sought, and were offered the support of, the Royal Navy in compiling a Recognised Maritime Picture (RMP). Drawing a circle located on Weymouth Bay that has a 1,000km radius provides some interesting insights into the nature of the potential maritime threat. An arc from the northwest to the northeast draws in a wide range of locations from where terrorist groups, or protestors trying to raise the media profile of their cause, could choose to launch attacks or protests. Dissident Irish republican groups provide one possible threat axis, potentially travelling by sea to place a Vehicle Borne Improvised Explosive Device (VBIED) in the vicinity of events. Fortunately, Irish dissidents have no track record in suicide attacks or armed assaults on civilians. Whether dissident Irish republicans or Al-Qaeda trained terrorists, approaching covertly by sea is far from straightforward. The security around the sailing events is so tight; any vessel not registered to travel into or out of the area will simply not be allowed to complete the journey. That alone may be sufficient to dissuade any attack from the seaward flank. Royal Marines on board the amphibious ship HMS Bulwark – destined to be an operational hub off Portland and Weymouth during the sailing events – will provide an ability to enforce that sanction. Patrolling Royal Navy helicopters capable of detecting vessels trying to encroach into the sailing area and its immediate environs will back them up. Sensor and radio systems aboard HMS Bulwark will also be used to update the RMP.

In looking at the kind of maritime attack scenarios that might exist, the approach has been to consider every means by which a group or lone individual could chose to enter the sailing area. Sea mines floated from a vessel that passes by Weymouth Bay, apparently not diverting its course to raise suspicions, have also been considered. Some terrorist groups might be prepared to deploy such a device at an appropriate tidal state hoping that it will drift into the sailing area. Its mere presence could be sufficient to disrupt the events and gain media coverage.

To score, terrorists need only appear to have been close to achieving their goals.

A suicide bomber on a small water jet propelled craft could also pose a fast threat. Recent exercises carried out by the Royal Navy, and covered extensively by the media, have shown what kind of reception someone embarking on that kind of attack could expect. What is more likely is that an individual on small fast craft could be trying to publicise some grievance. Events at the recent Boat Race – when a lone swimmer caused considerable disruption – provide an example of how direct action by individuals can raise the media profile of a cause.

For each of these scenarios a number of counter-measures exist that will have the effect of disrupting the attack. The threat from the sea also could come from the south and east. Within the 1,000km arc many ports exist from which the kind of fishing vessel used by terrorists to make their approach to Mumbai could be launched.

Developing and maintaining the RMP throughout the events will enable any unusual behaviour to be detected. It would be wrong to rule out the potential for a terrorist group to have seized a vessel somewhere along the northern European coastline with a view to sailing for Weymouth Bay.

For those trying to secure the Olympics a major question is what lies over the horizon? Had Nimrod still been in service that element of the maritime picture would have been comprehensively delivered. Without the Nimrod capability those trying to place a security cordon around Weymouth Bay, and indeed the venues in London, will not find things so easy as they might otherwise have been. Fortunately many things at sea travel quite slowly and information systems, such as the Automatic Identification System (AIS) do provide important information on which vessels are in the vicinity. They also offer good sources of information on potential hazardous cargos. AIS will provide an important feed into the RMP that will be assembled and evaluated on board HMS Bulwark throughout the games, and also by the assault ship HMS Ocean on the Thames, as she, too, acts as a security hub. It will be a 24-7 operation and unexpected things can happen at sea. The teams involved in securing the sailing events and London venues have really tried to cover all the bases and possible threats from the maritime environment. But they will not be complacent. Planning for the worst case, while hoping for the best, is a good maxim in the counter-terrorism field. It is one not lost on those finalising their arrangements to secure the sailing events at Weymouth Bay, and also safeguarding the Thames and its approaches.

Top –  Aboard the assault ship and command platform HMS Bulwark off Weymouth during her own recent pre-Olympics training, a Royal Canadian Navy officer works alongside other key players in the Ops Room. Photo: LA(Phot) Martin Carney/Royal Navy. 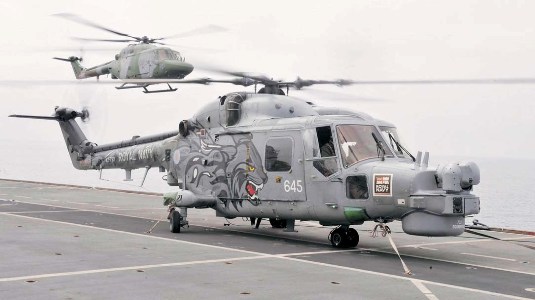 Above – A Fleet Air Arm Lynx Mk8 on the flight-deck of HMS Ocean during the same London-based exercise, with a Lynx Mk7 from the Army coming in to land behind. Photo: LA(Phot) Guy Pool/Royal Navy.

LACK OF CEC ‘SENSOR SHOOTER’ CAPABILITY IS A MAJOR ERROR

With the London Olympics around six weeks away Dr Dave Sloggett considers the Royal ...