‘A big struggle is taking place right now. Not a struggle over the Crimea, or Ukraine, or Russia, it’s a struggle for the world order…Right now, Putin stands only one step away from becoming the world leader, the key figure, the embodiment of liberty and independence from US hegemony.’ 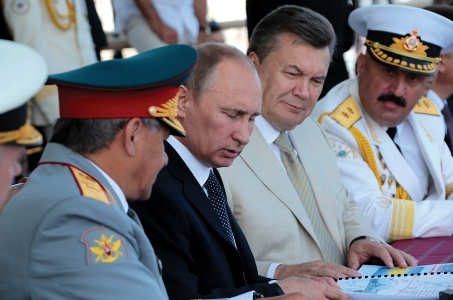 During the Ukrainian and Crimean crises of 2014 President Vladimir Putin of Russia has not used the same script as other world leaders. While the West’s foremost nations talked the talked, promising billions they could ill afford in financial aid to sustain the new government in the Ukraine, Putin’s troops walked the walk.

In Washington D.C. this all took place against proposals to cut the USA’s armed forces, of withdrawing completely from Afghanistan, while in Europe the British proceeded apace with their own disarmament. The French, also implementing defence cuts, were discovering they had a strike carrier that was only 65 per cent operational. Meanwhile both Russia and China continued to grow their armed forces, their navies in particular.

The waypoints to the Crimean situation were clearly marked. The Russians, who had been outraged when the West destroyed the Gaddafi regime in Libya in 2011, were jubilant last year when they successfully forestalled a similar fate for Assad and his cohorts in Syria. For Putin that was when the West blinked, shying away from strikes that could have seriously undermined Moscow’s foothold in the Levant (particularly its naval support facility at Tartus). The Russian leader saw this as a further sign of Western lack of resolve, particularly allied with NATO’s retreat from Afghanistan.

For him, armed forces are a major weapon of influence and he has no time for soft talk of ‘aid super powers’, except when supplying the tools of war to Moscow’s client states. Putin believes in playing hardball with military aid.

Following on from the endless stream of amphibious warfare vessels carrying weapons to the embattled Assad regime in Syria to shore it up, Putin in early 2014 decided to intervene in the Ukraine by sending ‘political advisors’ to bolster President Viktor Yanukovych. When ordering his paramilitaries to gun down protestors calling for their country to join the West did not work, Yanukovych fled to the Crimea, an autonomous region that is heavily populated with ethnic Russians. It is still home to Russia’s Black Sea Fleet (BSF) under a leasing arrangement that sees that force well entrenched in Sevastopol and at other bases across the peninsula.

Yanukovych was whisked away to Russia, from the port of Balaclava itself and soon naval infantry – insignia removed to gain advantage from confusion and acting in a very restrained and professional fashion – were on the move in a carefully orchestrated plan to steal the Crimea from the Ukraine.

While the new government in the Ukraine conducted a war of words, Moscow’s forces continued to be deployed in classic Russian style, using moves from the old Cold War era playbook – Hungary 1956, Prague 1968 and Afghanistan 1979 – except with a menacing subtlety the Soviets, with their clunking fist of a Red Army, could never have emulated.

Paratroopers from various parts of Russia were soon flown in after Crimean air space was unilaterally closed to civilian traffic. The so-called invasion was – certainly in its first phase – actually taking place on territory that has a deep spiritual, as well as strategic, hold on Russia. Many of the troops, including the 810th Marine Infantry Brigade were on their home turf, as that unit has been in the Crimea for many decades. Its job is to protect Russian bases in the peninsula, which it duly did. It also sealed off Ukrainian forces in their bases. Russians believe the Crimea should really never have been separated from Russia by Nikita Khrushchev’s gesture that awarded it to the (then) Soviet Socialist Republic of Ukraine in 1954.

Ukrainian speaking in the north and west and Russian-speaking in the south and east, the Ukraine has a bloody past. Many Ukrainians saw the invading Nazis as liberators during WW2 and Stalin made sure they paid a heavy price for that. Ethnic German, Ukrainian and Tatar populations were removed so that Russians could be settled in Ukraine’s fertile eastern lands. Today’s Russian-speaking provinces (or oblasts) look to Moscow for their leadership. Ukrainian-speaking oblasts want to join Western Europe – a ready-made recipe for conflict. But beyond all this is the strategic question and that, above all, drives Russia’s behaviour. It still feels that in the world it has only two reliable and powerful friends: Its army and navy.

Access to ice-free ports has been a key strategic aim for Russia, whether under the Czars or the Soviets, and President Putin will not abandon that historic cause.

He is also determined to stop NATO’s advance into Eastern Europe and from the Russian point of view the Western defence alliance has been nibbling away (perhaps unwisely) at its buffer zone.

The Baltic States, Poland, Romania and Bulgaria are now NATO members and Putin fears the Ukrainians could soon join the alliance. A sign of their intent has been the ever-tighter partnership on operations between Kiev’s naval forces and those of the West. One swift achievement of Russia’s Crimean power play was the virtual neutralisation of the Ukraine’s naval forces.

Following the effective occupation of the Crimea by Russian forces, Canada, France, the United Kingdom and the United States withdrew from preparatory talks for the 2014 G8 meeting due to be held in Moscow in June.

As this magazine went to press, the world was facing the most serious turn of events in Europe since the fall of the Berlin Wall – suddenly the post-Cold War era of peace and stability was over and a new fear of conflict was unleashed on the Continent. Anywhere with a substantial Russian ethnic minority could be open to Moscow’s military action in defence of its peoples.

The Baltic States have long feared such a move. And with the Russians still occupying the large Kaliningrad naval base enclave (the former East Prussia, lodged between Poland and Lithuania) it would not be hard for Moscow to manufacture a Crimea-style crisis. It could send its tanks and troops striking down through Latvia and Lithuania – via the Russian ethnic zones – or even gain access via Belarus.

All of a sudden politicians in capital cities of the West were setting aside their maps of the Middle East and Asia-Pacific and gazing with trepidation at places much closer to home that NATO obliges them to defend properly. With armed forces cut to the bone in Europe, the Afghan withdrawal not yet completed and the USA in the middle of shifting its focus to Asia-Pacific, what could be done either in the Ukraine or the Baltic States?

Meanwhile, Russia has just announced the establishment of a ‘Northern Fleet – Joint Strategic Command’ to oversee control of not only its Arctic zones, but also ensure it gains, and retains, the massive mineral resources of the Arctic shelf itself. Newspaper commentaries published in Moscow have claimed that Putin is establishing a new world order.

He certainly seems to be embarking on that endeavour with cool and cunning calculation, determined to create a legacy of Russian power and influence the West and his nation’s so-called ‘near abroad’ will respect…and fear.

Above – President Vladimir Putin of Russia, second from left, and then President Viktor Yanukovych of the Ukraine (magnolia suit) at the Black Sea Fleet’s Navy Day in Sevastopol last summer. Photo: Russian Navy. 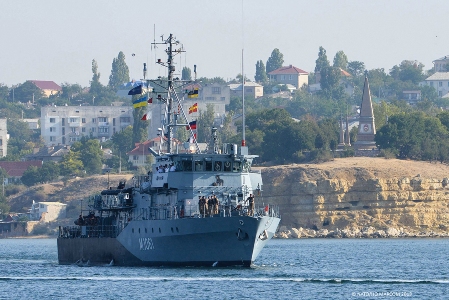 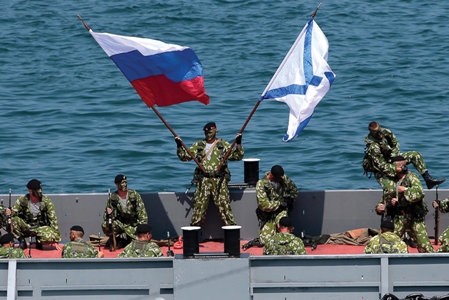