LIGHTER THAN AIR EYES IN THE SKY

WARSHIPS IFR looks beyond the headlines 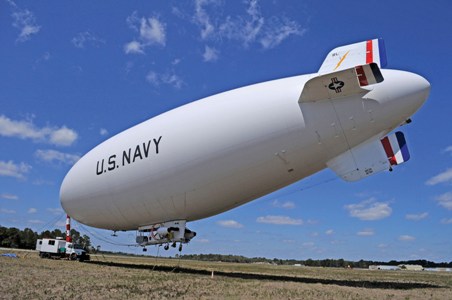 Navies were among the first to spot the possible benefits of using airships for scouting duties, but technical problems – and catastrophic accidents – put paid to the idea. Now, as Charles Strathdee reports, naval airships are making a return.

During WW1 large lighter-than-air ships were deployed by the Germans to bomb the United Kingdom, their appearance in the skies striking fear into the hearts of Britons.

By today’s standards the Zeppelins carried relatively small bomb loads, and their chief value even back then was psychological. Their sheer size and relative immunity to being shot down ensured they entered the annals of history as one of the most famous terror weapons.

However, Zeppelins also played an important role in maritime surveillance, frequently patrolling ahead of the German High Sea Fleet to ensure the Royal Navy was not lying in wait over the horizon. In the aftermath of WW1 the United States Navy acquired one of the latest Zeppelins, which was renamed USS Los Angeles

(ZR-3). This craft logged 4,398 hours of flight, covering a distance of 172,400 nautical miles over the Pacific and Atlantic oceans.

There were attempts to develop a doctrine for Los Angeles, and other similar US Navy airships, whereby they would stay hidden above clouds while they dropped small aircraft to conduct scouting missions. A trapeze system even allowed such so-called parasite aircraft to be recovered and taken into a hangar within the mother ship, but it was an unstable device and difficult to operate.

Of the four Zeppelin-type airships operated by the USN in the 1920s and 1930s, only Los Angeles avoided accidental destruction. They were vulnerable to fatal damage in severe weather and when things went wrong it was generally catastrophic. Los Angeles was decommissioned as an economy measure during the Great Depression. Also, why operate slow moving and fragile airships on maritime reconnaissance when increasingly capable aircraft could do the job? The loss of the Hindenburg in the late 1930s, when the German passenger-carrying Zeppelin was destroyed by fire and explosion on landing at Lakehurst US Naval Air Station, appeared to signal the end of both civilian and military use of large airships. They were too slow, too expensive and too accident-prone.

It was, though, not the end of the story. The use of helium instead of hydrogen helped combat one of their primary vulnerabilities. Helium may not be as efficient as a lifting gas as hydrogen, but it is inert and non-flammable. Hydrogen is extremely volatile.

The ability of high-tech sensors to observe vast areas from fixed points also means it is less of an advantage for a platform to move fast in order to provide coverage. In fact the long-endurance loitering ability of a reconnaissance platform such as an airship makes it more useful than ever.

The platforms deployed on such missions can either be manned or unmanned. The other advantage they offer is persistence, a characteristic that is invaluable in support of combat forces operating in a hostile and rapidly changing environment. In recent times the US Navy has returned to the business of operating airships (or at least trialling them as potential surveillance platforms).

For example, Operation Martillo is used by the United States 4th Fleet to combat transnational criminal activities in the Caribbean. Interdicting drug smugglers and people traffickers over such a vast area – the Caribbean Sea covers an area of 2,754,000 square kilometres – poses huge challenges. Recent trials by the US Navy have tried to explore the ways in which airships, or blimps, might be able to contribute to increasing the effectiveness of such counter-smuggling missions.

The tethered TIF-25K Aerostat unmanned blimp has this year been deployed by the USN on the Military Sealift Command high-speed vessel Swift (HSV-2). The TIF-25K can be launched quickly and can carry payloads providing communications relay and intelligence collection capabilities. The tethered blimp does, however, have some limitations. The length of its wire limits its operational height while weather conditions can also be problematic.

Technological developments have at least ensured that the various sensor payloads are very capable. With the platform deployed at an altitude of 1,000 metres it is possible to scan an area of just over 40,000 square kilometres.

The United States Navy is also looking into the ways in which piloted airships might also be used. Trials with the MZ-3A manned airship are also underway off the coast of Florida. This variant of the A-170 commercial blimp can operate at higher altitudes and is less affected by weather. It has been in the inventory of the United States Navy since 2006 and is operated by a single pilot with up to nine observers.

In that time it has been used as an advanced flying laboratory to evaluate the performance of a range of sensor systems. In a ribbon cutting ceremony in October 2011, at the Naval Air Warfare Center, Lakehurst, New Jersey – not far from where the Hindenburg crashed – MZ-3A was unveiled with new USN livery and experimental squadron markings.

During trials in April 2013 MZ-3A completed 38 hours in the air while consuming 346 gallons of fuel at an average fuel burn rate of 9.1 gallons per hour. The estimated fuel cost for the trials was $2,100. On operations the MZ-3A would have a flight ceiling of 3,000 metres. This would enable it to monitor maritime activity over an area of 160,429 square kilometres.

Its flight duration of 12 hours is also important, while MZ-3A can attain a speed of 45 knots and travel just over 350 nautical miles during that time on patrol. The evaluation of the trials continues.

It may be some time before airships are deployed, as part of day-to-day operations by the USN but surely anti-piracy missions must beckon for this latter-day ‘Zeppelin’?

With the situation in the Gulf of Guinea deteriorating – and US AFRICOM keen to help combat such lawlessness – it is possible that the next deployment of the MZ-3A might be from a forward operating base in West Africa.

Should that be a success the successors to the MZ-3A could well be launched on operations wherever the US Navy patrols around the world. With such an all-powerful eye in the sky loitering far overhead terrorists, pirates and smugglers will have even less hiding space at sea or on land.

US Navy airship MZ-3A is moored at Fernandina Beach Municipal Airport during a visit to the US 4th Fleet region for a capabilities demonstration. Photo: US Navy. 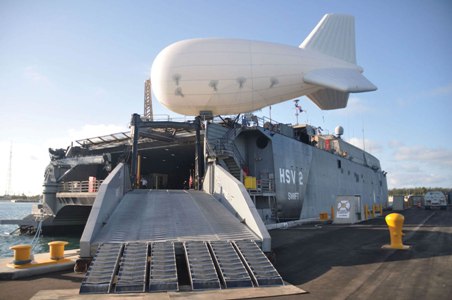 The tethered TIF-25K is positioned on Swift (HSV 2) to be tested and evaluated at sea for use in Operation Martillo. Photo: US Navy.

REAL STEEL NEEDED EVEN IN THE CYBER WARFARE AGE

WARSHIPS IFR looks beyond the headlines