Parliamentarians in the UK have suggested Britain’s commitment of naval forces to the Libyan campaign last year exposed serious deficiencies in the country’s maritime forces. In a report entitled ‘Operations in Libya’ members of the House of Commons Defence Committee observed that the Royal Navy’s efforts to help protect the Libyan people from the depredations of the Gaddafi regime were commendable ‘particularly in respect of the evacuation of civilians from Benghazi, the enforcement of the arms embargo and the early deployment of the first Response Force Task Group.’ They went on to note that there was, however, a downside to such achievements in the wake of the Strategic Defence and Security Review (SDSR).

The MPs observed that ‘important tasks, such as the Fleet Ready Escort and counter drugs operations, were not able to be carried out due to meeting the Libya commitment.’ The MPs warned in the report: ‘Given the continued high levels of standing maritime commitments it is likely that this type of risk taking will occur more frequently as the outcomes of the SDSR are implemented.’ The MPs are keen to know how the Ministry of Defence (MoD) will manage those risks. One of the ships that played a key role in evacuating civilians from Libya, the Type 22 frigate HMS Cumberland was on her way home to decommission early after being cut from the order of battle in the SDSR. She had been East of Suez performing a valuable role in fighting piracy off the east coast of Africa, as well as performing key functions in counter-terrorism task group operations. She will now either be scrapped or sold to a nation such as Brazil, keen to expand its naval capabilities via the cost-effective purchase of second-hand warships.  The Defence Committee’s Libya report was also concerned about the lack of British strike carrier capability, another aspect of Britain’s maritime forces degraded by the SDSR, via the culling of HMS Ark Royal and the entire Harrier force. The MPs reflect in their report: ‘Whilst none of our witnesses [giving evidence to the committee] told us that the Libya operation could not have succeeded without a fixed wing aircraft carrier, we note that three ships capable of carrying aircraft were deployed in theatre as well as the helicopter carrier HMS Ocean. We also note that the First Sea Lord told us that if a carrier with Harrier Force capability had been available it would probably have been used. In response to our Report the Government should indicate if the operation could have been carried out more effectively and efficiently with an aircraft carrier. We repeat our support for proceeding with both Queen Elizabeth Class carriers to ensure one is always available for operations.’ The US Navy did not deploy a strike carrier during the Libya campaign but, in its early stages, launched Harrier strikes from one of its amphibious assault ships, while the Italian Navy deployed its Harrier carrier. A major effort was made by the French Navy via its nuclear-powered strike carrier, the Charles de Gaulle, while Paris also decided to deploy two Mistral Class assault carriers with attack helicopters aboard, which worked alongside the Royal Navy’s HMS Ocean (with Apaches embarked). The British government, which has faced stinging criticism ever since it was revealed it would discard strike carrier capability until 2020, when the new Queen Elizabeth Class carriers begin entering service, has sought consistently to focus on the ability of land-based jets to fill any gaps.

The Defence Committee report expresses deep concern that the damage inflicted by SDSR on British military capabilities across the board is posing serious and long-lasting risks to Britain’s ability to defend its interests, its territorial commitments around the globe and its citizens. In short, the UK Armed Forces are no longer fit for task. The report acknowledges that ‘the UK was able to satisfy both operations in Libya and the Military Standing Tasks and other operational commitments’ but that the Libyan campaign was conducted before ‘the implementation of many of the Strategic Defence and Security Review decisions on capability reductions.’

The report warns: ‘We believe the Government will face significantly greater challenges should an operation of similar size be necessary in the future and it will need to be prepared for some difficult decisions on prioritisation.’ The MPs add: ‘We urge the Government to review the United Kingdom’s capacity to respond to concurrent threats. This work should be conducted as a matter of urgency before the next Strategic Defence and Security Review.’ The next SDSR is due in 2015 and within the MoD there is already much work being done to identify further cuts. The sheer cost of waging the Libyan campaign with land-based strike jets of the RAF flying from the UK or Italy is remarked upon by the Defence Committee, something that suggests a disconnection between the SDSR’s alleged purpose in saving money and the reality of its aftermath. In response to the Defence Committee’s criticism, Secretary of State for Defence Philip Hammond said: “The Libyan campaign shows that we retain the contingent capability to conduct operations in addition to our commitments in Afghanistan, counter-piracy off the Horn of Africa, Gulf security and standing tasks such as the Falklands and defence of the UK. Conducted against the backdrop of a multibillion-pound black hole in the defence budget, the SDSR required tough decisions whose underpinning logic the committee has previously agreed with.” On the day of the report’s publication, the Chair of the Committee, James Arbuthnot MP said: “The mission in Libya was successful in discharging the UN mandate. The real test is whether the success of this mission was a one-off or whether the lessons it has highlighted mean that future such missions can be successfully undertaken, whilst maintaining the UK’s capability to protect its interests elsewhere.”

One of the few: The Royal Navy Duke Class frigate HMS St. Albans and US Navy cruiser USS Mobile Bay pull alongside the Nimitz Class aircraft carrier USS John C. Stennis in the Gulf. There are just 13 frigates left in the British fleet’s order of battle. Photo: US Navy. 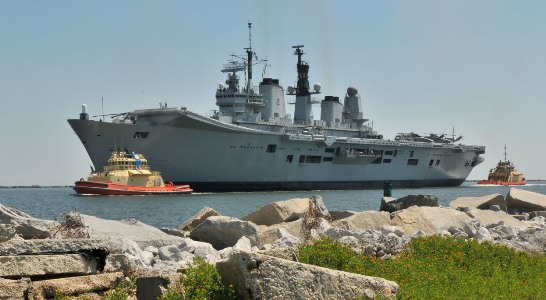 In late May 2010, having just emerged from a refit and with a full air group embarked the carrier HMS Ark Royal approaches Naval Station Mayport, Florida, for a scheduled port call. Within months the Royal Navy flagship had been axed from service and many of her sailors and aviators were in line for being made redundant, all part of shocking defence cuts. Photo: US Navy. 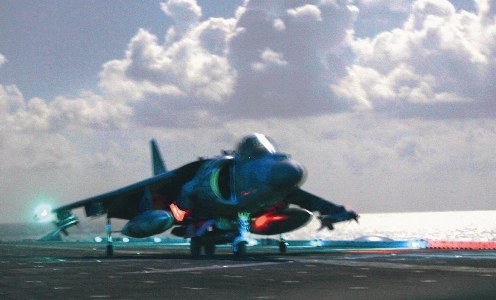 Proving the validity and potency of the Harrier as a flexible strike weapon during the early stages of last year’s Libya campaign, a US Marine Corps variant of the famous British combat aircraft operates from the USS Kearsarge. Photo: USMC.

Parliamentarians in the UK have suggested Britain’s commitment of naval forces to the Libyan ...