LACK OF CEC ‘SENSOR SHOOTER’ CAPABILITY IS A MAJOR ERROR 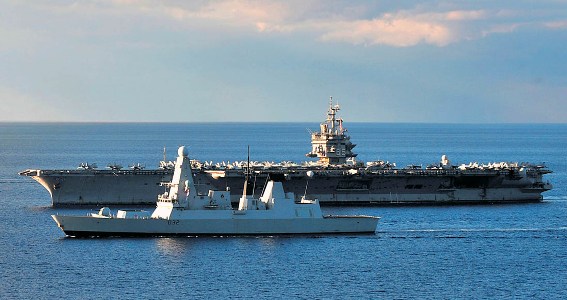 It was an element of UK Defence Secretary Philip Hammond’s balancing of the books that slipped past without any major, mainstream media comment.

We are talking about the decision to ditch plans for Cooperative Engagement Capability (CEC), the revolutionary combat networking that will be a do or die necessity in future naval warfare. The rationale behind successive British governments’ decisions to cut numbers of frigates and destroyers was that CEC would be a force multiplier, enabling them to better integrate with the ‘sensor’ and ‘shooter’ networks of the US Navy. With a terrifying array of air and sub-surface weapons to counter, CEC is an absolute necessity to save lives and achieve victory. Amid all the ballyhoo about the F-35 U-turn, the fact that CEC had been ditched went unremarked. However, it was in some ways just as important as the carrier decision.

While it could be argued logically that going for short-term savings, by not converting the future HMS Prince of Wales to ‘cats and traps’ for the F-35C, was necessary to get strike capability earlier via the STOVL F-35B, the decision not to incorporate CEC into Type 45 destroyers and forthcoming Type 26 frigates is a major error. Instead, money is being wasted on upgrading Cold War-era armoured vehicles for land wars the UK will never fight again and pouring more good money into the gigantic black hole that is the RAF’s Typhoon fighter aircraft. Indeed across the board the so-called ‘balancing of the books’ was yet another case of robbing Peter (the Navy) to pay Rupert (the Army) and Prune (the RAF). Clearly the F-35B decision was not made on grounds of what is necessary in reality for the defence of the UK, but rather to make short-term savings so cash could be diverted to the Army and RAF to keep them happy. The same applies to the CEC error. Even a cursory look at emerging threats suggests that the maritime domain is ascendant, but instead of raising force levels in future submarines and frigates, or even destroyers (with BMD-capabilities like similar European ships), and introducing a successor to Nimrod as soon as possible, the Royal Navy was made to feel like it should be grateful for the so-called ‘big ticket’ items it is getting. Pork barrel politics is, though, alive and well in the MoD. The coalition government has failed several times since it gained office to take the right decisions on behalf of national defence, due to a staggering lack of understanding about how decisive navies are. Nations will live or die by what kind of navies they field, not their armies. Air forces can play a supporting role, but they will be subsidiary to the maritime forces, not the other way around as the UK is currently configured. The claim that the RAF plans to participate in strikes on Iran – should diplomacy fail to neutralise that country’s nuclear weapons ambition – by flying its elderly Tornados from the UK (a distance of around 4,000 miles) is astounding.

As happened in the Libya campaign, it is a clear example of a gold-plated service squandering taxpayers’ money due to a lack of strike carrier capability. At least the new carriers are being built and the argument for two appears to have gained traction. But, by performing the U-turn and switching back to the F-35B, the Royal Navy will lose out on full, fixed-wing cross-decking interoperability with the US Navy. Britain will lose out in another sense. The F-18 Super Hornet – a comparatively cheap and proven alternative – when disembarked from the carriers, could have been available to participate in the air defence of the UK.

F-35C investment could come later when the jets are more affordable. The cost of developing the F-35B will have to be shared across a much smaller number of aircraft – the US Marine Corps (USMC) is the only other major buyer, with plans for 340. The Italian Navy and Spanish fleet may buy F-35Bs, but there again their financial dire straits could rule this out. It must all make the programme as a whole more vulnerable to delays and even cancellation. The F-35B has about one-third less fuel carrying capacity than the F-35C, with effects upon its range and payload. There are even those who suggest that in certain severe climates it may not be able to fly at all. Looking on the bright side, or should we say studying the benefits of a flawed U-turn, BAE Systems would have had little or no work-share in the F-18, compared to its 15 per cent work-share in the F-35. There are, though, many problems still to be overcome, not least manpower and bringing the two new super-carriers into service more or less on time and capable of hosting and launching F-35s. When faced with a similar problem in the 1960s – the introduction into service of the Polaris strategic deterrent – the Royal Navy appointed an admiral as Chief Polaris Executive. Recently, the Royal Navy did have, in the ghastly management speak of the MoD a ‘Senior Responsible Owner (Carrier Strike Capability)’ but the top naval officer in the Aircraft Carrier Alliance today is a Captain RN, known as the ‘Client Director’. The MoD cannot leave this important project to its normal committee structure, or allow the programme to become the subject of inter-service rivalry.

No other major maritime nation allows the strange mix of land-based air having a major say in sea-based fixed-wing.

After all RN does not have a major say in the Typhoon or Tornado force, does it? What the Royal Navy needs now is to appoint a Chief Carrier Officer, someone who is going to drive the current programme for the next four years. He, or she, would oversee training of F-35B aircrew and support personnel, and ensure that the new naval squadrons are properly prepared, and integrated as far as possible with the US Navy and Marine Nationale operational doctrine. Whoever it is must see that this important naval programme has a bright start, is on cost and on time.

Pictured: The aircraft carrier USS Enterprise on exercise in the Atlantic with the British destroyer HMS Daring (nearest), the sort of event that would have benefitted from CEC capability. Photo: US Navy.