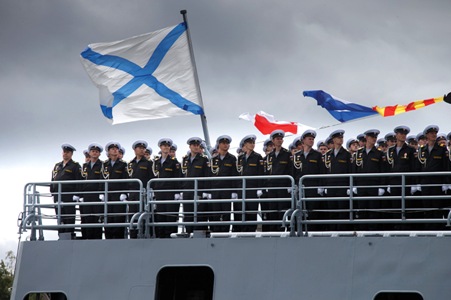 An ambitious new strategy in which Russia will aim to contest supremacy over the Atlantic and in the Arctic has been laid out during a meeting chaired by President Vladimir Putin aboard a warship.

Under major revisions to its maritime doctrine and operational stance, the Russian Navy will also maintain a permanent squadron in the Mediterranean. It was all outlined aboard the guided-missile frigate RFS Admiral of the Fleet Sergei Gorshkov, lead ship in a proposed class of at least six new 4,500 tons frigates being constructed for the Russian Navy.

Not only was the fact that the vessel is named after the Soviet-era hero who made the Russian Navy into a global colossus deeply significant, so was the naval base location. The frigate was alongside at Baltiysk, the primary base of the Baltic Fleet, in the Kaliningrad enclave, which borders two NATO nations, Poland and Lithuania.

Until occupied by Russia at the end of WW2, Kaliningrad was known as East Prussia and part of Germany. The Baltic has recently become the scene of much tension between the West and Russia, especially at sea. The Gorshkov’s wardroom hosted a carefully staged briefing session to which television media were invited.

As the Comrade Commander-in-Chief of the Russian Armed Forces, as President Putin is also known, looked on, Deputy Prime Minister Dmitry Rogozin outlined aspects of the new strategy. Major areas of attention for operational doctrine revisions have been the Atlantic and the Arctic, Mr Rogozin pointed out.

“We emphasise the Atlantic because NATO has been developing actively of late and coming closer to our borders,” he said, “and Russia is, of course, responding to these developments.” As forecast by many analysts, not least those writing for this magazine over the past few years, access to, and exploitation of, the Arctic is of high priority for Moscow.

Mr Rogozin explained: “Several events motivate our decision [to focus on the Arctic].” He went on: “One is the growing importance of the North Sea Route.” To ensure this major new ocean superhighway around the top of the world, from Asia-Pacific to the Arctic, skirting Russia’s northern coast, remains clear work has begun “on building a new fleet of atomic-powered icebreakers” according to Mr Rogozin.

He told President Putin: “Three new atomic icebreakers will be ready for work accompanying ships along the northern route in 2017, 2019, and 2020.” Explaining the strategic importance of the route, Mr Rogozin added: “Furthermore, the Arctic also assures us free and unhindered access to the Atlantic and Pacific oceans. Then there are the riches of the continental shelf, the development of which calls for an attentive approach.” 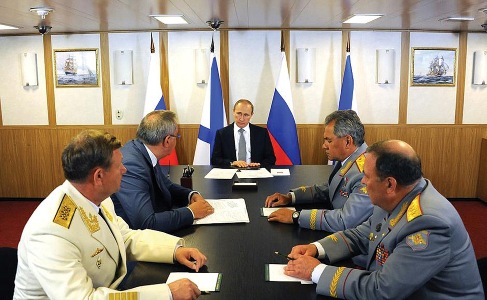 The new Russian emphasis lays down the gauntlet to the West, which has let its maritime capabilities erode greatly since the time when it contested the Atlantic and Arctic with Russia. The Royal Navy and US Navy were during the Cold War the primary forces tasked with holding the Soviet Navy at bay, particularly with Anti-Submarine Warfare (ASW) task groups, including frigates and submarines.

The US Navy maintains a powerful range of capabilities and significant force levels, but it is now devoting 60 per cent of its units to Asia-Pacific where it faces a mighty challenge from China. The Royal Navy, meanwhile, has discarded two thirds of its strength, and has seen its force levels in both frigates and submarines decline drastically.

The rest of Europe and NATO, with the exception of France, has failed utterly to invest in the right kind of maritime capabilities or numbers of platforms to counter a resurgent Russian threat. It is something that has long worried the USA as it continues to carry the major burden of defending the West.

Russia’s new challenge could not come at a worse time for the West, with the need to also counter a serious, and growing, terrorist threat across an arc of chaos and conflict stretching all the way from Iraq to Tunisia. Russian submarines have already allegedly exploited Britain’s weak spots in ASW defences while both Sweden and Finland have been subjected to undersea incursions. The Baltic States have in recent times been forced to fend off several intrusions at sea by both Russian submarines and surface warships.

With Syria in chaos and the Russian naval support facility at Tartus potentially at risk, there has been speculation that Moscow will approach the bankrupt Greek government with a proposal to rent some of its naval facilities. Such a move would send shock waves throughout NATO, as Greece is a member of the alliance and a major naval player in the Mediterranean.

Some defence experts point to the vast challenges Russia faces in even attempting to upgrade its naval capabilities to try and contest maritime supremacy in certain zones. Underestimating the Russians is a common Western conceit for, as Admiral Gorshkov himself once said, “better is the enemy of good enough” and the Russian Navy remains a large force. Various regeneration and construction projects are currently underway for the Russian Navy. Its presence at sea has already increased greatly. During one recent period it claimed to have 100 vessels deployed on global operations.

Russian Navy sailors parade aboard a warship of the Northern Fleet, which will be tasked with contesting control of the Atlantic and Arctic.

In the wardroom of the frigate Gorshkov, President Vladimir Putin (centre) discusses the new maritime strategy with naval and defence chiefs. 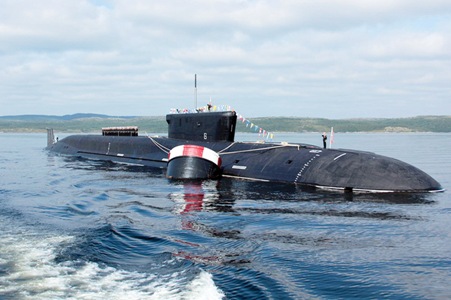