KEEPING UP PRESSURE FROM THE SEA

Naval forces continue to play a key role in bearing down on the ISIL terrorist group in its Syrian and Iraqi bastions. The French Navy flagship and strike carrier Charles de Gaulle has been at the head of a multinational task group, with her Rafales and Super Etendards flying bombing sorties.

Helping to protect her was the British Duke Class (Type 23) frigate HMS St. Albans, which specialises in Anti-Submarine Warfare (ASW) but can handle other tasks such as force protection against potential surface attack by fast boats.

Another key British naval unit currently deployed is the Daring Class (Type 45) air warfare destroyer HMS Defender, which is riding shotgun on the US Navy carrier USS Harry S. Truman, also conducting air strikes against terrorist targets. Defender is due to be in Middle East waters for nine months, also helping to safeguard Charles de Gaulle when called upon.

The Truman’s jets flew their first missions in support of Operation Inherent Resolve (OIR), the US-led campaign against ISIL on 29 December. Rear Admiral Bret Batchelder, who is the commander of Carrier Strike Group (CSG) 8 explained the Truman and her consorts are playing a vital part in the diplomatic, informational, military and economic (DIME) effort.

“War-fighting is the priority; that’s why we are here,” Batchelder elaborated. “We provide the hard power in the collective DIME, and look forward to contributing however we can. Dual carrier operations with the French allow us to maximise our firepower and provide a unique opportunity to [achieve] further progress against ISIL. It validates our abilities to successfully operate as an international coalition while conducting very dynamic operations.”

The French and American carriers run complementary operational rhythms and take it in turns to apply pressure on ISIL. “While one carrier is able to fly sorties in country to support OIR, the other carrier can conduct maintenance and prepare for the next day,” said Captain Fredrick Luchtman, commander, Carrier Air Wing 7 (CVW 7) in the Harry S. Truman. “The carriers can then swap,” Capt Luchtman went on, “which allows us to put more sorties in country.”

For the USA, with a whole raft of global security concerns to handle, and often with the US Navy on the cutting edge, defeating ISIL is paramount. US Secretary of State for Defense Ash Carter highlighted the critical nature of the fight when he attended the World Economic Forum in Davos, Switzerland. 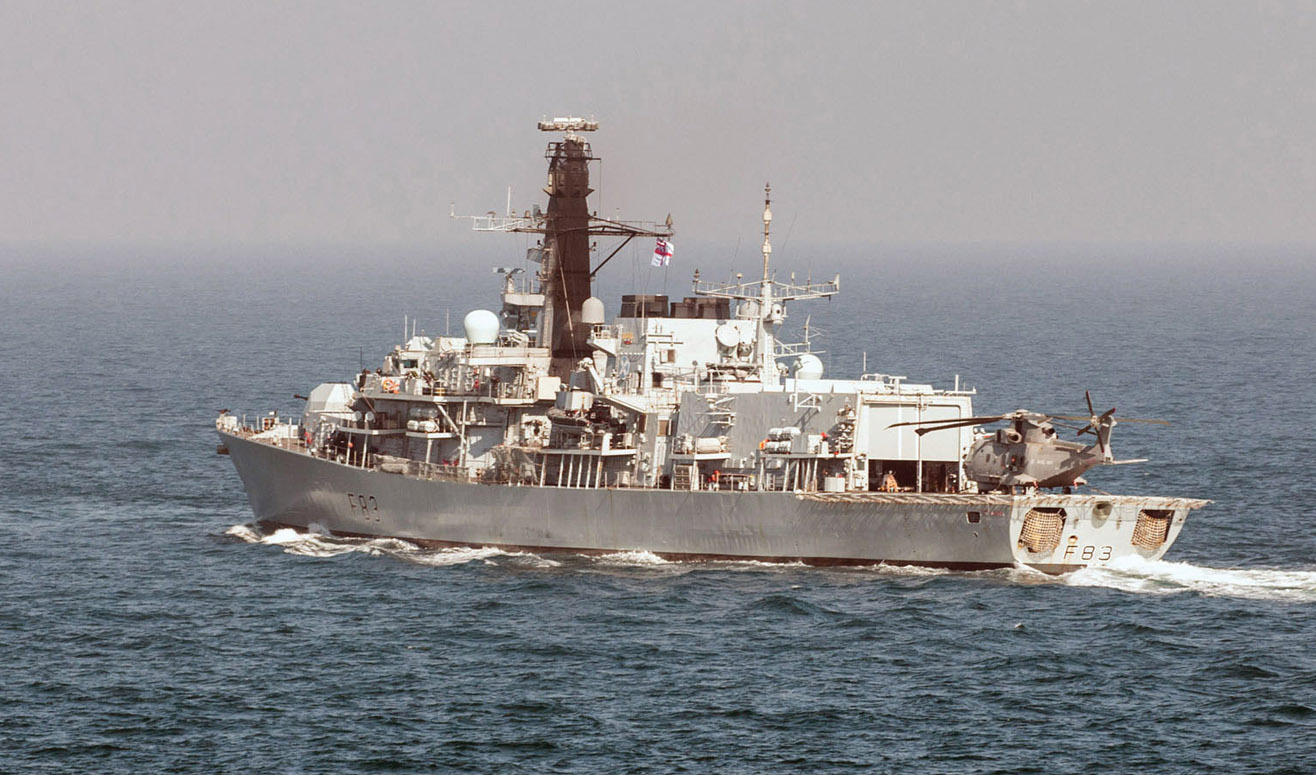 HMS St. Albans in the Gulf as part of the Charles de Gaulle strike group.

Defeating ISIL is “very much on my mind,” Carter revealed. “It will occur, and needs to occur first and foremost in Syria and Iraq.” For that is where, according to Carter, the ISIL “parent tumour” is located.

Concerns about ISIL’s malign presence exerting itself in North Africa are also growing and recently the chairman of US Joint Chiefs of Staff, Marine Corps General Joseph F. Dunford met his French counterpart, General Pierre de Villiers, in Paris. They discussed the fight against ISIL terrorists not only in Syria and Iraq but also in Libya. “It’s fair to say we’re looking to take decisive military action against ISIL [in Libya] in conjunction with a legitimate political process,” General Dunford later explained.

He suggested military action must be carefully thought through and embrace both coalition building and capable partners on the ground. “It’s a pretty complex situation,” confessed General Dunford. “Unchecked, I am concerned about the spread of ISIL in Libya,” he added, warning that ISIL could use Libya as a platform for other activity in Africa. A key objective of the air campaign against ISIL in Syria and Iraq is destroying the organisation’s economic infrastructure. A US Department of Defense briefing on the progress in that area reported that ‘airstrikes against the illicit oil infrastructure and its financial hubs have meant the terror group had to halve the pay of its adherents.’ So far such carefully targeted strikes have, according to a DoD briefer, ‘hit 34 modular refineries, 138 oil collection points and 399 tanker trucks and millions of dollars in cash.’ It is hoped these strikes will erode ISIL’s ability to govern and finance itself in the long term.

When it comes to the effect of the major Russian air campaign in Syria, the Pentagon has maintained its strikes still seem to be aimed at supporting the Bashir al Assad regime. The Pentagon feels this ‘enables groups like ISIL to take advantage and to expand into areas where opposition groups are being impacted.’

In the meantime, for the West’s naval forces, keeping the pressure on ISIL with their air strikes from carrier strike groups in the Arabian Gulf, the range of supporting players include the British replenishment vessel RFA Fort Victoria. She has been out in the Gulf for more than a year acting both as stores supplier and fleet tanker.

By last month Fort Victoria had carried out 43 Replenishment At Sea (RAS) operations with vessels from nine Allied nations. Some 22,923 cubic metres of diesel have been pumped across from the auxiliary’s tanks. Helicopters – including the Sea King Mk7 Airborne Surveillance and Control (ASaC) aircraft of 849 Naval Air Squadron, who have been using Fort Vic as their base for reconnaissance missions – have taken from the ship 1,740 cubic metres of aviation fuel. Six hundred pallets of dry stores have been shifted either by line transfer or helicopter.

RFA Fort Victoria is due to continue supporting coalition vessels into 2016, ensuring the strike assets can remain on station.

• Reports based on material provided by the US Navy, US DoD, Royal Navy and UK MoD. For more on Russia’s efforts, see an accompanying item in the March 2016 edition. 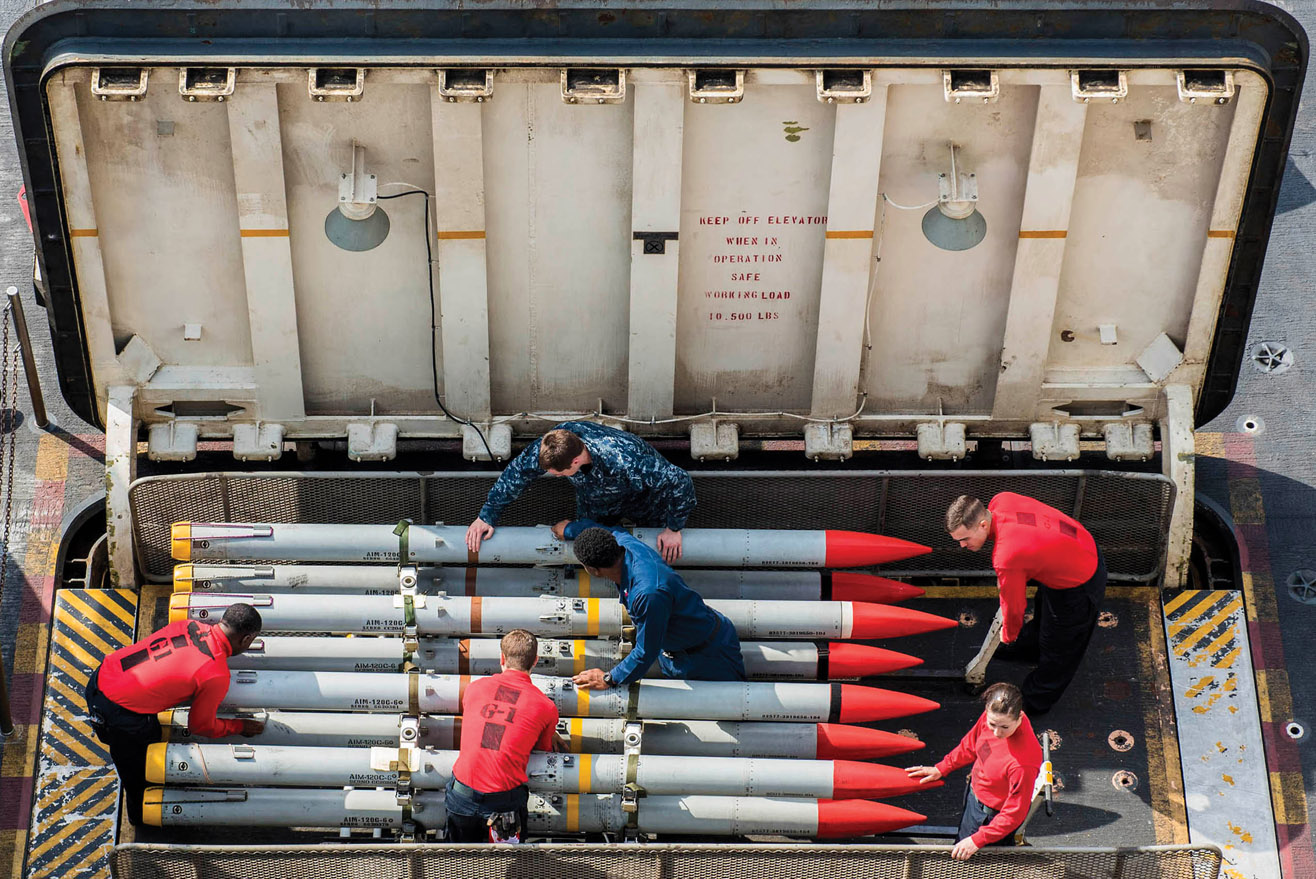 Aviation ordnancemen inspect missiles on the flight-deck of the USS Harry S. Truman.