IS THIS THE END OF WESTERN NAVAL SUPREMACY? 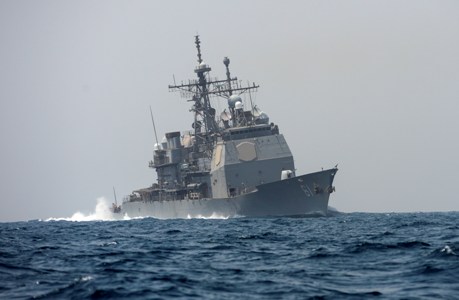 The 70th anniversary of the turning point in the Battle of the Atlantic has just been commemorated. It was in its own way a means of celebrating the last great globally important strategic victory at sea that was led and dominated by the Royal Navy.

The Allies won because of cutting edge technology (sonar, surface search radar), more lethal weapons, an ability to dominate the surface of the sea both via warship hunting groups and aircraft, and improved convoy tactics teamed with penetration of German codes.

Within a few years Britain had passed on the baton of being the world’s maritime superpower to the USA, which (with help from NATO) provided a counterpoint to the rapid expansion of the Soviet Navy that occurred in the 1960s and 1970s.

The US Navy has remained the predominant sea, air and land force on the face of the planet in the years since the end of the Cold War, but is even America’s maritime supremacy now coming to an end? Austerity and two draining land wars in Iraq and Afghanistan have created huge budgetary pressures in the USA and among its Western allies.

Sequestration in the United States has piled on the pain for the USN, which has cancelled deployments, curtailed procurement programmes and scaled back warship refits and shore base support levels.

America is finding it increasingly difficult to maintain its role as the major maritime superpower and there are warnings its ship numbers will have to be cut radically. In Europe there has since the end of the Cold War been a swift naval disarmament. The Royal Navy, for example, is today a third of the size it was during the Falklands War of 1982 – the latter a notable triumph of expeditionary warfare that acted as an epilogue to the RN’s great efforts in WW2.

The British fleet has suffered the most telling cuts in the past decade under both Labour and coalition government, losing critical mass, technological edge and suffering whole capability cuts. There are new ships, submarines and aircraft but they are fewer, though more ambitious in their capabilities, hugely expensive and (so it seems) difficult to bring into service as fully effective operational platforms. In France – Europe’s other significant maritime power – there are also naval cuts.

No other Western nations are even aspiring to possess full spectrum naval capabilities. It is simply beyond them economically, industrially and militarily. As Western naval capacity enters a slow (but steady) decline other countries are increasing theirs. Foremost among them is China. Ambitious plans for the People’s Liberation Army Navy (PLAN) to break out from its previous role of being a coastal defence force are being realised.

To underpin its economic expansion China simply has to be able to control the various Sea Lines of Communication (SLOC) on which it depends. With a growing population China must expand its economy in order to create the jobs its people need. With scant natural resources of its own China has to import raw materials from all over the world – from elsewhere in Asia and from the Arctic, from Africa and also Latin America – in order to feed its voracious growth.

To achieve this all elements of China’s maritime power are undergoing a rapid transformation. The rate of introduction of new platforms is dizzying. But that does not necessarily equate to military capability.

While China’s meteoric rise as an economic superpower provides the wealth to vastly increase its expenditure on defence that does not immediately translate – despite rapid expansion in naval platforms and associated capabilities – into it becoming a global maritime superpower.

Even with China’s undoubted work ethic and desire to project itself onto the world stage it will take time to evolve a coherent doctrine of how to apply naval power. Personnel and equipment also have to be melded into an effective fighting force.

It is wrong therefore to draw the conclusion that right now is the moment when the East surpasses Western naval supremacy. Measuring naval capability in platform numbers alone is not the way to assess the potential fighting effectiveness of a nation state.

Today’s situation is very reminiscent of the Cold War. Russia’s massive, breakneck naval expansion was often cited as a cause for deep concern. But had confrontation turned to conflict there are reasons to believe that Western naval forces would have prevailed. Western military doctrine that encouraged commanders to take the initiative, depending on the situation in their local area, would have been an important factor.

The more rigid Soviet-era command structures would have created approaches to combat that were more stultified. In situations where tempo was important, Western naval forces would have held an advantage.

As China evolves its naval capability to challenge American hegemony in Asia-Pacific, it will also need to find ways to overcome the bureaucratic limitations that any centralised system place on its naval and military command hierarchies. Other States that are expanding their naval capacity on a grandly ambitious scale will face similar problems.

India and Brazil are two such countries whose economic progress is also allowing them to increase their maritime presence. With its new-found oil wealth Brazil will initially concentrate on projecting naval power at the sub-regional level, to ensure that its neighbours do not threaten its economic lifeline.

For India, power projection has to be at the regional level. It must be able to defend its SLOC in a time of crisis. The common material aim of the so-called BRIC (Brazil, Indian, China) powers is to create balanced naval forces with strike and intelligence collection assets above and below the waterline. Investments in submarines, aircraft carriers and destroyers as well as Maritime Patrol Aircraft (MPA) are obvious key developments.

In the period from 2015-2035 the United States and its Western allies will still maintain a formidable naval capability, even if the numbers of warships are less than have been previously deployed. Alliances can help bridge capability gaps that may arise. The transition from the certainties of the Cold War to a new international security landscape dominated by China and the other BRIC countries is not yet complete. That transition may take another 50 years.

The question for the West is how it chooses to deal with that situation. As the United States progresses with its strategic pivot towards Asia-Pacific some early clues are emerging. The United States will deepen its relationships with Japan, Australia and South Korea and also work closely with Vietnam, India and the Philippines. A new form of maritime alliance may well emerge that is not dissimilar to NATO, only its remit will be the security of the Pacific Rim.

France will be an Indian Ocean player, as it has bases already established in that region, while the UK must surely also aim to play its part as a major maritime player East of Suez? In the wake of debilitating naval cuts, via effective cooperation the Western naval powers’ dominance of the world’s oceans will probably continue for the foreseeable future. It is easy to understand why current and future major naval expansion in China, India and Brazil has been heralded by some commentators as indicative of a fundamental shift in the balance of dominance away from Western navies.

For so long it was only the West (and Russia) that had the military know-how, the strategic need and economic power to create carriers, nuclear-powered submarines and complex surface combatants.

They were also the only powers with the experience of using such assets in times of peace and war, and the means of applying them to protect national interests. The BRIC nations are at the beginning of a long journey to acquire major naval forces and will now garner much operational experience along the way, let us hope in peace rather than war. One major lesson provided by the Soviet Union is that pursuing naval supremacy (by building huge numbers of submarines and ships) can in the end prove so expensive that it causes the downfall of the very State it is supposed to buttress. China, India and Brazil beware.

A Ticonderoga Class guided-missile of the US Navy on deployment – a symbol of extant Western naval supremacy that may not endure much longer?

NO ‘FREE RIDES’ IN NATO