EUROPE’S MIGRANT CRISIS IN THE MED: OUR BRETHEREN’S SHIELD IN DANGER’S HOUR? 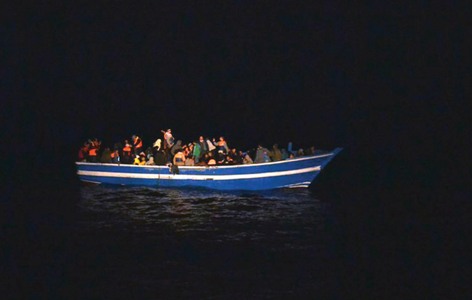 Dr Dave Sloggett explores what can be done to stem the rising tide of desperate migrants seeking to make the hazardous journey across the sea to Europe from North Africa. He suggests undermining the organised crime and terrorist organisations exploiting human misery. Additional reporting by Charles Strathdee.

There is no disguising the essential underlying problem. The people trafficking networks facilitating the journeys of migrants across the Mediterranean Sea are well established. They make extensive use of social media to put their vulnerable clients in touch with the criminals who will exploit their dreams for a better life.

This is not a problem with a quick fix solution. No matter what the European Union (EU) does, it will not deter what Palermo Public Prosecutor Maurizio Scalia estimates are one million people currently waiting to put their lives in jeopardy by sailing for Europe in potentially unseaworthy craft.

They are desperate folk who will take whatever risks necessary. That makes them ideal fodder for the criminal networks, the armed militias and terrorist groups. While there is pressure to destroy the boats of the traffickers and disrupt their networks – and Europe is establishing a new naval task group – military activity alone is insufficient. The solution must be all encompassing, drawing in the full range of navies, air forces, coastguards and also aid organisations, plus law enforcement.

The catalogue of recent incidents demonstrates the scale of the problem. The deaths of close to 850 people in one episode, many of them children, provided a gruesome jolt, especially as corpses were brought ashore. This has acted as the catalyst for a more coordinated response from European powers.

The phasing out of Operation Mare Nostrum – run by the Italian Navy – and its replacement with a much scaled-back Operation Triton, run by the European frontiers force Frontex, was always a strategy destined to fail. The idea that fewer assets to save people at sea would mean fewer migrants risking the journey was based on the notion that they control their destiny.

In reality, once in the hands of trafficking networks, the migrants forfeit their free will. They are put in whatever craft are available, regardless of the seaworthiness. The traffickers’ business model assumes that once the fuel runs out halfway across the Med, and the boats are sinking, then a European naval or coast guard vessel will come to the rescue. Or, the migrants die. Either way the traffickers get their money.

European governments were warned that, as the weather improved into 2015, the scale of the disaster that would unfold would require a rethink. It took the deaths of many migrants to force that change of course.

Reports of Christian migrants being thrown overboard and of some people being killed merely for standing up in a boat illustrate the desperate and homicidal environment into which migrants are plunged. Ships with large numbers of refugees aboard have been deliberately abandoned by their captains and crews, too, risking not only lives but also presenting an additional hazard in busy shipping lanes.

In searching for solutions some commentators have eagerly alighted on the outcome of the EU’s Operation Atalanta mission performed off the coast of Somalia. They see its positive impact on the reduction in piracy as the model that could be applied to the situation off the coast of Libya. Surely, they argue, if warships could prevent pirates they could also stop people traffickers? Such a solution would only go so far.

While the establishment of a EU Naval Force Mediterranean (EU NAVFORMED) has to be welcomed, it is not the end of what needs to be done. It must not be overlooked that tackling pirates is one thing and acting against people traffickers quite another. One size (or approach) does not fit all.

Some have, somewhat naively, suggested sending ashore military forces to blow up the boats to prevent further use by the traffickers. In the course of Operation Atalanta this approach was only used on one reported occasion. It was a very limited application of military force; more a demonstration of what was possible.

That raid involved attacking some of the fuel dumps used by the pirates. A similar strike operation on fuel stocks used by the people traffickers for their vessels could have a short-term effect. As ever, in such a situation, as soon as one avenue is restricted the traffickers will open up new channels. It is axiomatic when fighting any form of organised crime group that they have a greater degree of freedom of manoeuvre than those seeking to stop them. They operate outside the law, in whatever fashion they like.

Deployment of armed guards on merchant vessels was instrumental in the defeat of the pirates off Somalia, something the ship owners had resisted for ages due to the costs involved and complications in international law. Other measures, including the introduction of citadels into which crews could retreat while awaiting help, were also important. No single measure was enough. There were too many variables to deal with. It required a concerted approach using a balance of initiatives to shift the battle against piracy to a tipping point at which it became uneconomic.

In other words, one of the key reasons the levels of piracy dropped was because the business model adopted by the pirates no longer paid dividends. So could this approach be used to reduce the rate of flow of economic migrants across the Mediterranean Sea?

• This is a compressed version of an article published in the June 2015 edition.

A fragile craft packed with desperate migrants is discovered by a Frontex patrol on a black night in the Med. 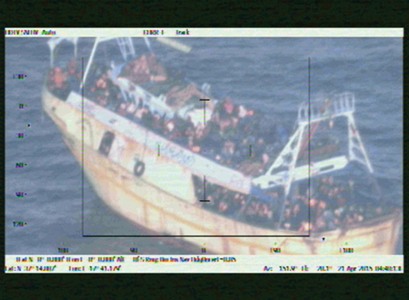 A helicopter camera shot of a migrants’ vessel.

TOOTHLESS EUROPE IS BARELY A MATCH