EUROPE NEEDS TO SHAPE UP AND EASE AMERICA’S GLOBAL BURDEN 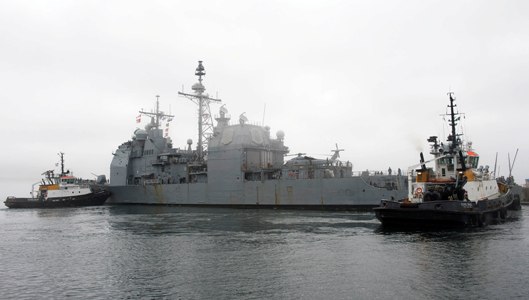 Whatever you think of Pax Americana, for 70 years since WW2 the USA has shouldered the responsibility of being the world policeman that the tired, played out empire of Britain shrugged off.

However many mistakes the USA has made – and there have been a number – it has broadly safeguarded a free world against, first of all, the Soviet Union and latterly against a myriad other lesser threats. It has protected a global system of trade, democracy and shared values.

The strategically bipolar world of the Cold War can now be viewed as a period of unparalleled stability and understanding between East and West, albeit achieved at the risk of nuclear annihilation and some very tricky moments (such as the Cuban Missile Crisis in 1962 and Arab-Israeli War of 1973).

The victory of the West in the Cold War (by 1991) and the economic collapse of the Soviet Union opened a window of opportunity for the USA to become an unchallenged global leader.

Things went adrift with the 2003 invasion of Iraq, which in retrospect was a huge strategic error, uncorking the bottle and letting the genie of chaos loose across the Middle East. If a repugnance for foreign long-term involvement in dubious land campaigns is the result of misguided and ill-conceived interventions in Iraq, and also Afghanistan, the staggering list of concurrent crises in the Ukraine, Syria, Palestine and Libya, to name but a few, is another very serious consequence.

Probably we are in the opening stages of a new Thirty Years’ War. In the 17th Century the Catholics of Europe fought its Protestants whereas today Sunnis fight Shias. However, beyond that we have a settling of scores by the Russians, taking revenge for what they perceive as the West’s arrogant disrespect for their power since 1991 and also NATO incursions into Moscow’s sphere of influence. Russia today aims to counter what it sees as NATO hegemony and to make sure the world trembles in the long shadow cast by its enduring nuclear power status.

The Thirty Years’ War was one of the most destructive and longest continuous conflicts in history, when entire regions were devastated and most of the combatants were bankrupted. With all sides exhausted, it ended via the Treaty of Westphalia and ushered in a new world order.

This new Thirty Years War will encompass the world and there is no clue as to how it will eventually end. Let’s also not forget China, growing in economic and military power and gazing out hungrily at a world in which trade and tourism are its due tribute as the Central Kingdom. Others jostling for a place at the top table include India and Brazil.

On this sea of difficulties one constant might be the transatlantic alliance of the USA and of Western Europe. In the middle of its post-Cold War strategic pivot to Asia-Pacific, devoting 60 per cent of its navy to that key region of the world, the USA expects Europe to do more on its own behalf to police trouble spots and see off crises before they happen.

So far Europe is proving inadequate. Its armed forces are weak, it has no unified foreign policy and its response to Russian military aggression is not taken seriously by Moscow, which controls natural resources vital to the economic and social well-being of some major European nations. Moscow has some Western countries, primarily Germany, Italy and France, by the short and curlies energy-wise. Italy, for example, relies on Russia for 28 per cent of its energy supplies. Europe is compromised and Britain, once the leading military power in Europe, has poured sparse resources and manpower into pursuing land campaigns in Iraq and Afghanistan. It has warped UK defence structure in favour of an army and air force that do not deter Russia at all. Meanwhile, Germany’s air force is hollowed out and the French military is in a funding crisis.

This is a pretty dismal defects list and there is no sign of the Europeans being able to shape up and make Moscow worry any time soon. They seem to think a few extra tanks and strike jets in central Europe and the Baltic are the answer, rather than the thing that Russia worries about most: Strong maritime forces operating close to its shores (but still in international waters).

It’s easy to send a few planes and a battalion or two to Poland or the Baltic States, less easy to shake up the entire defence infrastructure and invest properly in the right capabilities Moscow truly fears.

Beyond a resurgent and increasingly militaristic Russia, which is, for example, gearing up to make Arctic waters its Mare Nostrum, high on the to-do list for Europe must also be the defeat of the brutal (so-called) Islamic State in northern Iraq, Syria and the Levant. It is in no one’s interest for ISIL to succeed, especially as so many of its shock troops are disaffected young men recruited from the West. A Middle East with a brutal, fascist caliphate at its heart would be worse than if Saddam Hussein’s secular state had it not been brought down.

It would exacerbate a humanitarian crisis, destabilise the entire region from the Black Sea to the Arabian Sea, and threaten Europe. It is a clash already characterized by the ruthlessness and barbarity that infects all religious wars, but one where Europe’s interests and values are sorely challenged and risks must be taken.

Then there is the problem of what to do about Palestine. It is not sufficient that Europe should be the largest donor of aid to Palestine. It must be more than a cash machine to repair buildings and infrastructure that Israel will only knock down. There should be an end to the blockade of Gaza. Israel must accept more risks, without launching disproportionate blitzkriegs. Only then can a viable Palestinian state develop (and the power of Hamas be diminished).

Returning to Europe’s nearest geo-strategic challenge, the different perspectives are starkly illustrated by the contrast between jubilant and festive Navy Days celebrations across Russia, from Severomorsk to Vladivostock, and the general lack of interest in navies in Europe. Such national pride in new nuclear-powered submarines and surface warships, and the key role of the Navy in national defence, is almost completely absent in the West where navies are virtually forgotten and are certainly not publicly appreciated in the same fashion.

Furthermore, President Putin has boasted about renewing his nation’s sea-based nuclear deterrent at a time when the British, for example, are still dithering about their own SSBN renewal.

The UK could still potentially one day find an independent Scotland booting the nuclear deterrent force out of its Faslane base. Even though the Scots voted ‘No’ this time, a second such vote cannot be ruled out and it might be ‘Yes’.

Instead of being seen as a fundamental and urgent matter, in the democratic UK, prevarication over the future of the nuclear deterrent force will continue and become bogged down in partisan politics. Britain’s fleet also lacks critical mass, as do the rest of Europe’s maritime forces. They would not last long in any serious maritime struggle against a top line opponent.

There is in Europe also an absence of the kind of hard-edged realpolitik that would inevitably see an expansion in naval forces and their wielding in a fashion that will deter Russia. Besides, the Americans are always there, aren’t they?

Surely the US Navy and other American forces will take up the slack and Washington will pick up the tab? With sequestration cuts in American defence spending and numerous warnings from various top political and military figures about Europe urgently needing to do more, the USA is surely getting very tired of its burden.

Given today’s multiple crises, it is high time Europe did more for its own collective security, and to assume greater responsibility for global order and stability. Air forces have never deterred or won a war (as is being demonstrated against ISIL right now), but naval forces have. It is exactly the point Vladimir Putin understands, in addition to navies representing the confidence and power of a nation. Until Britain, and the rest of Europe shapes up in the naval sphere then Russia will not show respect. Such power is also used as yardstick by China to measure who is a serious world power and who is not. In the Middle East the line is being held against ISIL – until regional ground troops go in to do the dirty close-up fighting – primarily by naval strike power. That, then, is the reality of the world Europe must deal with. The more benign post-Cold War era of disarmament and leaving security to other people is well and truly over. Shape up Europe. 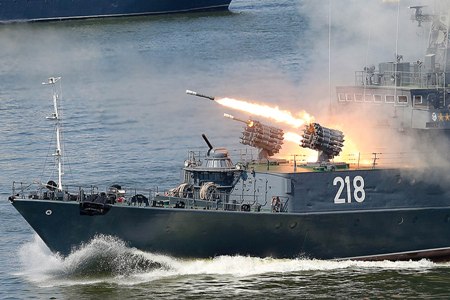 A Russian corvette lets rip with missiles during Navy Day at Sevastopol.