DOES THE UK GOVT JOIN ALL THE DEFENCE DOTS?

Tony Blair when he was Prime Minister used to talk about something called ‘joined-up government’. We were encouraged to interpret ‘joined-up government’ as whatever we wanted it to be – whether it referred to the integration of policy, public services and governmental processes or their delivery and implementation. Britain now has a Prime Minister in David Cameron who has displayed supreme pragmatism, whether in the creation of coalition government with the Liberal Democrats, the UK’s attitude to European monetary union, a Scottish referendum, or foreign policy, where he is as instinctively interventionist as Blair was. Never mind ‘joined-up government’, even a new pragmatist surely has to work hard to join up the dots within the policies of the coalition administration? For the signs are that Cameron’s pragmatism comes at the expense of grand strategic vision.

It was easy at the beginning of a new administration, in 2010, to rush through a Strategic Defence and Security Review (SDSR), but having reduced Britain’s armed forces so markedly it seems Cameron and co acted in haste. That is especially so with regard to the Royal Navy in an era that requires maritime power above all else. It is dangerous to talk tough over Iran, Syria and the Falklands without the naval means to transform your words into actions. It’s one thing to talk the talk, but quite another to walk the walk. Now the afterglow of success in Libya has faded, does the pragmatic Mr Cameron really think that, having got rid of the Naval Strike Wing (NSW) and HMS Ark Royal plus four Type 22 frigates (not forgetting several auxiliaries and retiring other vessels from service early) Britain can truly meet her global commitments? Iran and Argentina will not have failed to notice the discarding of naval power and have taken it as a sign of weakness. They will not fear, or listen to, a government that is so cavalier with the Royal Navy’s front line capabilities. It took the Falklands War of 1982 to teach Mrs Thatcher a hard lesson in the necessity of Britain never dropping its naval guard. One of the most controversial decisions taken at the start of the coalition’s time in office was to ring-fence the aid budget administered by the Department for International Development (DFID). Leaving aside the fact that 30 – 40 per cent of aid money is stolen, such generosity often enables the people of countries to avoid paying their taxes. After all, why bother funding your own welfare programmes by paying taxes when those lovely recession-hit British taxpayers will do it for you? Nowhere are the dots more in need of being joined up than in DFID’s policy towards India, a thriving emerging superpower with a swiftly expanding navy. Having given £825 million in aid to India (2008-11, in DFID’s largest bilateral programme), the same department now intends to devote £1.25 billion in aid over the next five years to the same country. The British part in the Libya War cost at least £300 million and probably twice that, primarily due to the folly of using expensive land-based airpower flying from the UK and Italy. Other nations cut costs and increased operational flexibility by also using carrier-based strike jets. All this while the Ministry of Defence makes comparatively poor savings via discarding the Harrier force and Ark Royal. The Indian Navy is developing a powerful carrier force and is planning to equip its fleet air arm with French-built aeroplanes (despite Paris only giving India £18 million aid in one year). The UK failed utterly to understand that India sees the maritime as its key arena in strategic defence. The Eurofighter was too expensive and currently has no maritime variant. To top it all, it has emerged the Indians feel insulted by arrogant Britain insisting on giving them aid they don’t need or want. British ministers allegedly asked the Indians to carry on accepting aid to avoid political embarrassment in the UK. Two years ago one British minister boasted he would rather spend the billions devoted to constructing the UK’s two new super-carriers on giving Africa new schools. We are still trying to figure out why it’s OK to encourage arms sales to a foreign country via foreign aid subsidy while suggesting that maintaining Britain’s own shipbuilding industry, and employing thousands of highly-skilled workers in the UK, is undesirable. Why is it alright to strengthen India’s future carrier strike power while proposing the UK does not have any at all? This is just one example of the failure of Cameron’s government to join the dots when it comes to the real strategic defence interests of the UK. Certainly the governments of Iran, Argentina and Syria do not now seem to take Britain seriously.  Even the Americans, who have just revamped their forces to ensure all their strike carriers and the rest of their naval strength is preserved, no longer regard the British as quite the special strategic partners they used to. Nor will the Chinese or Indians – both highly desired trading partners of Cameron’s coalition – treat a nation with respect if it discards (and seems reluctant to replace) the one marker of true global worth they are busy acquiring: Strike carriers. They are also building up their nuclear submarines (and Argentina is trying hard to field them, too). Iran has made considerable investment in submarine capabilities. Britain’s submarine force levels since the end of the Cold War have fallen dramatically. To adapt an old phrase, if the Navy declines, the trade follows.  In that respect the Cameron government has utterly lacked pragmatism. It is strategically reckless and foolish. 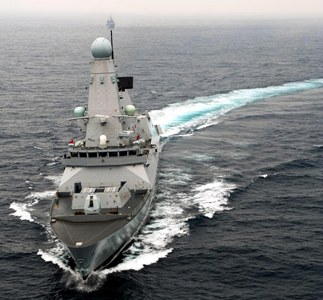 The Royal Navy destroyer HMS Dauntless prepares for a gunnery exercise while participating in Exercise FRUKUS 2011.  The Royal Navy’s six new Daring Class (Type 45) destroyers, including Dauntless, are cutting edge ships, but in the opinion of many analysts lack weight of numbers. Photo: US Navy. 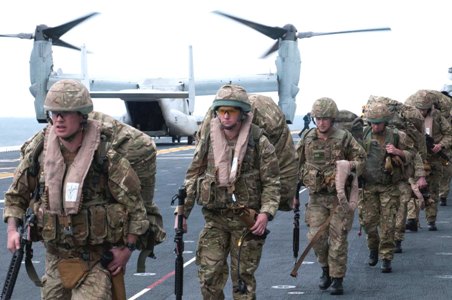 Royal Marine commandos cross the flight-deck of the American amphibious assault ship USS Kearsarge to board a CH-53E Super Stallion helicopter during the amphibious assault phase of Exercise Bold Alligator 2012. With no UK amphibious ships available, British commando forces were consigned to using the US Navy’s vessels to participate. Photo: US Navy.

Tony Blair when he was Prime Minister used to talk about something called ‘joined-up government’. ...