DID ‘GREAT WHITE’ OF SSNs STALK THE GULF? 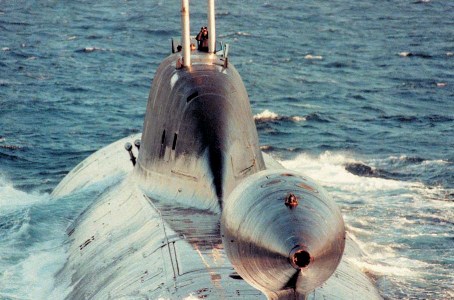 With the US Navy in the midst of a strategic pivot that will see 60 per cent of its forces located in Asia-Pacific, claims of Russia returning to daring Cold War-style incursion of Uncle Sam’s backyard delivered an unwelcome jolt to the Pentagon.

A leading Internet news provider unleashed startling claims that an Akula Class attack submarine – the Great White of SSNs – was detected leaving the waters of the Gulf of Mexico. What’s more, claimed the Washington Free Beacon, the Akula had been lurking in waters off the US coast for up to a month undetected.

It was an event unimaginable even in the recent past when America’s defence focus was more firmly fixed on the potential Russian menace. The claims alarmed Senator John Cornyn (Republican, Texas), who is also a member of the influential Senate Armed Services Committee, so much that he sat down and wrote to the boss of the USN. The Senator asked Admiral Jonathan Greenert, Chief of Naval Operations (who is a submariner by trade): ‘In light of the gravity of this situation, I request a detailed explanation of the facts surrounding these reports.’ In his letter to the admiral, Senator Cornyn said of the Akula reports: ‘This submarine activity reportedly occurred in June and July, simultaneously with incursions by Russian strategic bombers into restricted US air space. If these reports are accurate, the repercussions are serious. It is my understanding that an Akula Class submarine can be armed with an array of weapons, including torpedoes and long-range cruise missiles, capable of destroying both US nuclear submarines and aircraft carriers. The submarine patrol, taken together with the air incursions, seems to represent a more aggressive and destabilising Russian military stance that could pose risks to our national security. This is especially troubling given the drastic defence cuts sought by President Obama, which include reductions in funding for anti-submarine defence systems.’ US Navy sources have more than once denied there has been any evidence of the Akula’s presence in the Gulf of Mexico. The Akula has acquired special status as a submarine menace in the West. This dates from the late 1980s when it was discovered the notorious Walker-Whitworth spy ring – involving US Navy personnel – had enabled the Russians to take a quantum leap in submarine technology. It was embodied by the stealthy, fast, deep diving Akula, which has been upgraded since its early variants to retain par with equivalent American and British SSNs. This year’s Akula scare is not the first time such an event has occurred in recent times. While Russian submarine activity in the Atlantic declined to almost nothing immediately following the end of the Cold War in 1991, five years later Akulas were detected off the Eastern seaboard of the USA. Two Akulas were again detected off the USA and also Canada in August 2009. In August 2010, it was claimed an Akula attempted to track a British ballistic missile submarine in the North Atlantic. A Pentagon spokeswoman suggested on the Voice of Russia radio station that the Gulf of Mexico claims were “not correct”. Furthermore Admiral Greenert is said to have issued a personal assurance to the Texas senator that “based on all of the source information available to us, a Russian submarine did not enter the Gulf of Mexico.” If true, it would be a new patrol zone for the Russians, but the Caribbean has traditionally been the destination of choice for their naval vessels, not least during the Cold War (including the Cuban Missile Crisis). In 2008 a task group headed by the nuclear-powered cruiser Peter the Great visited Venezuela, which like many nations in South America has leftist leanings and is positive towards the Kremlin world view. There has even been talk recently of Russian naval vessels returning to using Cuba as a base. Russian Minister of Foreign Affairs Sergei Lavrov recently denied the notion, but admitted the Kremlin was discussing a variety of “opportunities with our Cuban friends.” The recent Russian aerial incursions included a foray by Bear H bombers, allegedly simulating strikes on Alaskan targets while other aircraft flew off the coast of California. According to Lavrov, the Russians are intent on asserting themselves as “a Pacific power”.