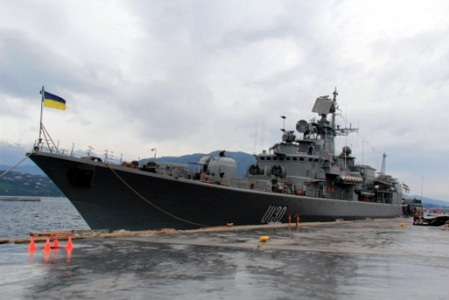 A Russian naval infantry brigade tasked with protecting the base at Sevastopol was deployed to spearhead a well-executed operation to seize control of the Crimean peninsula in the Ukraine. Meanwhile, airborne troops from Russia itself were flown in to airheads that had been secured earlier to reinforce the marines.

They completed the take-over within a few days. The Ukrainian Naval Force headquarters in Sevastopol was surrounded while its newly appointed Commander-in-Chief defected to the pro-Russian government of the autonomous Crimea.

A Russian Navy missile boat blockaded a Ukraine Coast Guard base at Balaclava. While it was reported several vessels were allowed to withdraw from the Crimea, the Ukrainian defence ministry said its units were staying where they were in Sevastopol harbour with hatches battened down.

Meanwhile, Ukrainian marines were bottled up in their barracks, literally in a face-off with Russian naval infantry. Calls for a Ukrainian marine battalion to surrender and leave its camp were declined but combat did not yet erupt.

At one naval base an attempt by pro-Russian forces to hijack a marine infantry armoured personnel carrier were thwarted by Ukrainian personnel forming a human chain around it. Even shots fired in the air did not move them and the would-be hijackers retreated according to the Ukrainian defence ministry.

With a massive Russian military presence already in various bases in the Crimea, which remains home to the Black Sea Fleet (BSF) under a leaseback arrangement, it was relatively simple for the Kremlin’s take-over to go ahead.

One of the most intriguing twists, however, concerned the flagship of the Ukrainian fleet, the Krivak III Class frigate Hetman Sahaydachny, which was reportedly plunged into a dilemma with echoes of the famed Russian battleship Potemkin.

The Hetman Sahaydachny was concluding a deployment with NATO and EU navies east of Suez, combating pirates, when mass protests in Kiev led to the fall of the pro-Russian regime led by President Viktor Yanukovych.

Russian sources soon claimed the ship had declared continuing allegiance to Yanukovych and would return to Sevastopol to come under the command of the Crimean government. The same sources, claiming the Russian naval ensign was now flown by the frigate, also alleged the Ukrainian government had asked Turkey to stop the frigate coming through the Straits to enter the Black Sea. Ukrainian government sources claimed she had not defected and still flew the Ukrainian ensign.

They released a photo of the warship berthed alongside at a NATO base in Crete to prove their point. The new head of the Ukrainian Navy, Rear Admiral Andriy Tarasov said: “Ukrainian servicemen serve for the Ukrainian people and sail under the Ukrainian flag.” As this magazine went to press it was still uncertain what the frigate’s ultimate fate would be: Would she head for a Ukrainian port such as Odessa or the Crimea? See accompanying news update.

In 1905 the Potemkin’s crew mutinied against cruel officers, killing several, while cruising off the Ukrainian coast. The pre-dreadnought ended up in a Romanian port after wandering the Black Sea pursued by Imperial Russian Navy vessels. On March 4/5 this year the Ukrainian frigate passed through the Bosphorus, allegedly heading for Odessa.

Meanwhile it was claimed by the Ukrainians that an attempt by the Russians to board and seize their command ship Slavutych, trapped in a Crimean port, was repelled.

Above – The Ukrainian Navy flagship Hetman Sahaydachny at the NATO naval facility in Souda Bay, Crete following the Russian seizure of Crimea. 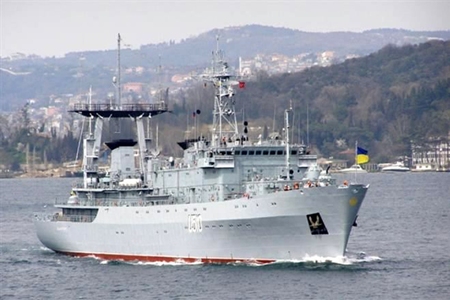 The Ukrainian Navy command vessel Slavutych, whose crew reportedly repelled a Russian attempt to board and size her. Photo: Ukrainian defence ministry. 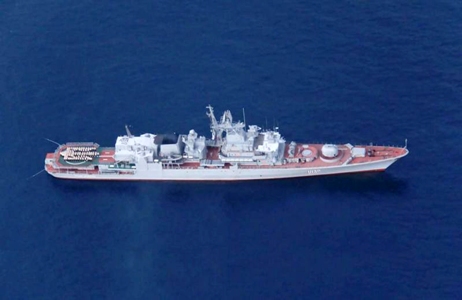 Sailors of the Ukrainian frigate Hetman Sahaydachny show their loyalty to the Kiev government by making the national symbol of the Ukraine on the flight-deck of their warship. Photo: Ukrainian defence ministry.