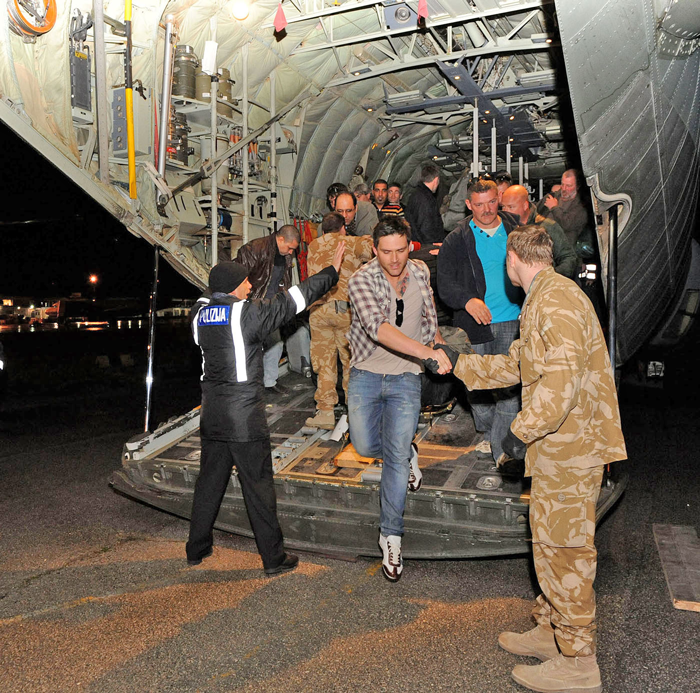 Britain’s Special Forces mounted a daring mission into the Libyan desert to rescue stranded UK citizens and other civilians from encroaching gangs of armed thugs. There had previously been unconfirmed reports of Royal Marines landing in Benghazi from the frigate HMS Cumberland and then heading south to link up with oil firm security operatives, many of the latter allegedly former members of the UK’s Special Forces who had been using their private network to locate civilians.

Hercules transporters from the RAF, which had flown to Malta, then inserted teams of troopers from the Special Air Service (SAS) and also commandos from the Special Boat Service (SBS) into Libya. They gathered the civilians together and escorted them onto the RAF aircraft, one of which was fired at as it took off. Some 150 people were picked up from locations south of Benghazi, utilising airfields that are maintained by oil companies working in those areas. Germany’s air force also took part in the airlift, with some German citizens taken to safety aboard RAF planes.

Meanwhile, other nations were ordering their navies into action, too, including China, which sent the guided-missile frigate Xuzhou. On counter-piracy tasking in the Gulf of Aden, she was ordered north through the Suez Canal to stand guard as chartered liners evacuated thousands of Chinese nationals. It was the first time in the history of the Chinese Navy that one of its vessels had been sent on a Non-combatant Evacuation Operation (NEO) in a conflict zone. As such it was a milestone for an increasingly global fleet. Meanwhile, a tanker full of Libyan crude oil sailed from rebel-controlled Tobruk bound for China, illustrating other aspects of Beijing’s critical interests in the region. Turkey had already deployed warships to escort merchant vessels into and out of Libya carrying many hundreds of Turkish and other nationals to safety. Italy, the nearest European nation to Libya, reportedly sent two naval vessels to conduct an evacuation of its nationals while also keeping a close watch on Libyan naval vessels at sea. There were numerous skirmishes between US Navy ships and aircraft and Libyan maritime forces during the 1980s, though nothing significant for 20 years. Mission accomplished, the Italian amphibious warfare vessel ITS San Giorgio returned to Catania, Sicily, carrying 258 people she had picked up at Misurata. The San Giorgio was a real ship of nations: 121 of those aboard were Italians, the rest being English, French, Belgian, Dutch, Austrian, Turkish, Albanian, Macedonian, Portuguese, Slovakian, Ukrainian, Croatian, Romanian, Indian, Mexican, Thai, Filipino, Moroccan, Tunisian, Algerian, Tanzanian, Mauritian and even a Libyan.

Germany deployed two frigates – FGS Rheinland Pfalz and FGS Brandenburg – together with a support ship, the Berlin, to the Mediterranean, while India ordered two destroyers and an amphibious assault ship to conduct an evacuation of Indian nationals from strife-torn North Africa. South Korea reportedly ordered one of its warships, the frigate Choi Young, also on counter-piracy operations in the Gulf of Aden, northwards to the Med. A Turkish warship earlier evacuated 30 Koreans from Benghazi. Russia asked Turkey to provide a warship to protect a ferry bringing its citizens out of the port of Ras Lanuf. The frigates TCG Orucreis and TCG Iskenderun were both involved in Ankarra’s efforts. Holland ordered the guided-missile frigate Tromp to divert from her intended front line mission of joining the counter-piracy effort off Somalia to stand-by for a Libyan evacuation mission. 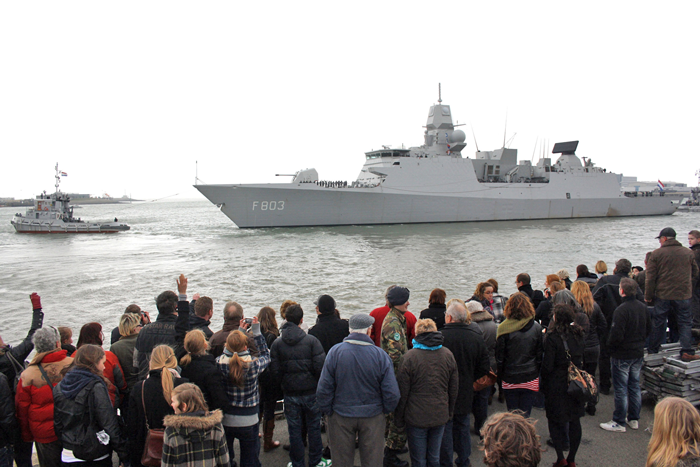 THE daring desert British raid took UK troops into territory over which the SAS and SBS operated during WW2 but which has been closed to British forces since the late 1960s when Colonel Muammar Gaddafi launched the coup that brought him to power. One of his first orders was to kick the British out of their bases in his country. With this year’s uprising to depose Gaddafi originating in the east of Libya, HMS Cumberland was ordered to first pick up stores at the NATO base in Souda Bay, Crete, then head for the port of Benghazi.

Once alongside she soon took aboard 207 civilians – 69 UK citizens and 138 others, including US nationals – then set sail for Malta, battling heavy seas on her way there.

The ability of naval forces to switch from one role to another was also demonstrated by the Type 42 destroyer HMS York, which had just departed Portsmouth for a tour of duty in the South Atlantic. She was diverted to Malta after a brief stop at Gibraltar. Type 22 frigate Cumberland had been conducting counter-piracy operations in the Gulf of Aden when she was ordered to waters off Libya. Cumberland’s Commanding Officer, Captain Steve Dainton observed: “Ten days ago the ship was off the coast of Somali which shows how flexible we can be. I am very proud of the way the entire Ship’s Company reacted to this challenge.”

As the Cumberland headed back to Benghazi to pick up more civilians fleeing the fighting, UK Secretary of State for Defence Dr Liam Fox revealed: “HMS York has arrived in Valetta to take onboard stores in order that she can assist with the evacuation effort as required. A number of other military assets remain available to support the Foreign and Commonwealth Office -led efforts to return civilians from Libya.” Meanwhile, some of those who were taken aboard Cumberland on her first rescue shuttle between Libya and Malta were speaking of their ordeal and expressing thanks to the Royal Navy for saving them. Teacher Sue Rodgers said: “It was very surreal because we could hear gun fire but could still pop to the shops to get items. It was in the last few days that the situation really worsened and we knew we had to go.” One Briton, Richard Weeks, was robbed at knifepoint before he could flee. “We were faced with looters rushing into the property where we were holed up and there was nothing we could do,” explained Mr Weeks. “It had been getting more risky for the ten days before and there was no prospect of it easing. They were armed with knives and knew they could take what they wanted, so it was better to let them get on with it. It was a very sad and terrifying situation.” 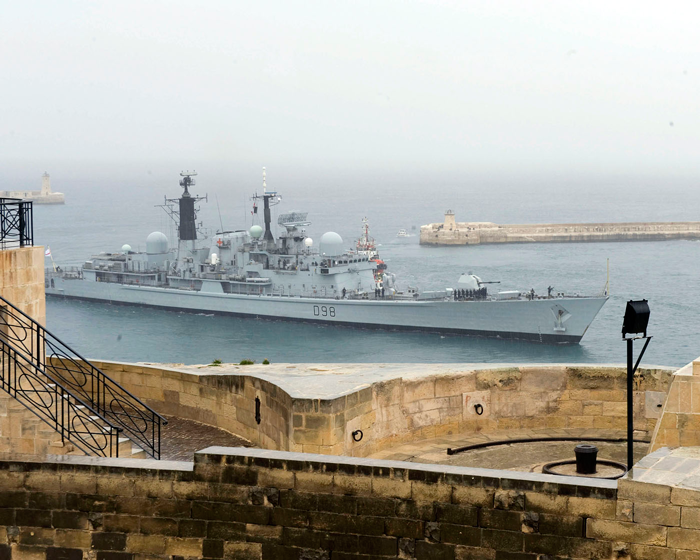 One of those evacuated from Libya by Cumberland was very familiar with his surroundings, for Mike Wilson saw action in the 1982 Falklands War aboard sister ship HMS Broadsword (no longer in RN service as she was sold to Brazil in 1995). Cumberland herself is due to be decommissioned from service on her return to Devonport Naval Base in Plymouth and may well be sold to a foreign fleet 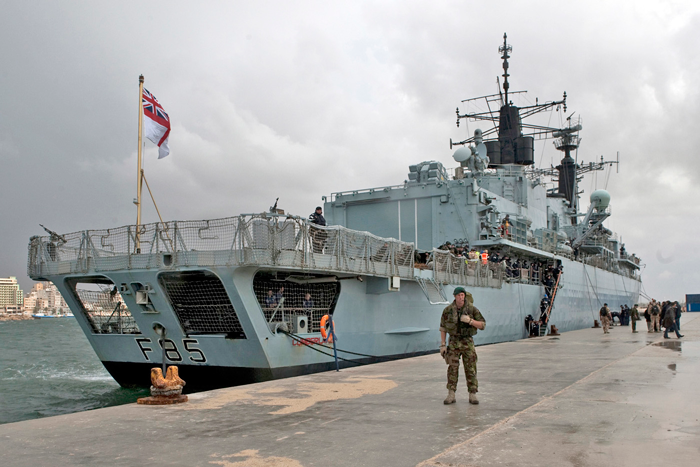 Falklands veteran Mr Wilson had travelled across the desert to reach HMS Cumberland and once safely aboard, he said: “I can’t speak highly enough of how we were treated and cared for in getting out of Libya. It was a very dangerous situation which was escalating and all of us onboard were glad to be rescued.”

During her 30-hour passage from Libya to Malta, the Cumberland’s passengers experienced seasickness caused by heavy seas, but Mr Wilson, as a former RN sailor, took it all in his stride, recalling similar conditions when he went to war.

“The seas in the South Atlantic are renowned for being choppy and dramatic but this was just the same as back then,” he said. “We were [accommodated aboard HMS Cumberland] in a small Junior Rates mess room and there were several people who were ill. But it was fine given the situation we were leaving and we’re very happy to be safe.” He added: “We were in a compound of buildings back in the desert and we had looters trying to get in, armed with knives. It was potentially terrifying situation and it’s sad for Libya.” Fellow evacuee Allan Lamont said of his rescue: “I thought the Navy was fantastic. It’s been absolutely brilliant. It’s been unbelievable. The food, the attention to detail, everything is far more than you would expect when you’re in such a difficult situation.”

THE WAR ON PIRACY: SUCCESS OR FAILURE?