The WARSHIPS IFR man in Sydney for the recent International Fleet Review was Ralph Edwards. To follow on from reports filed from Australia at the time here we provide Ralph’s special web report on the big event. 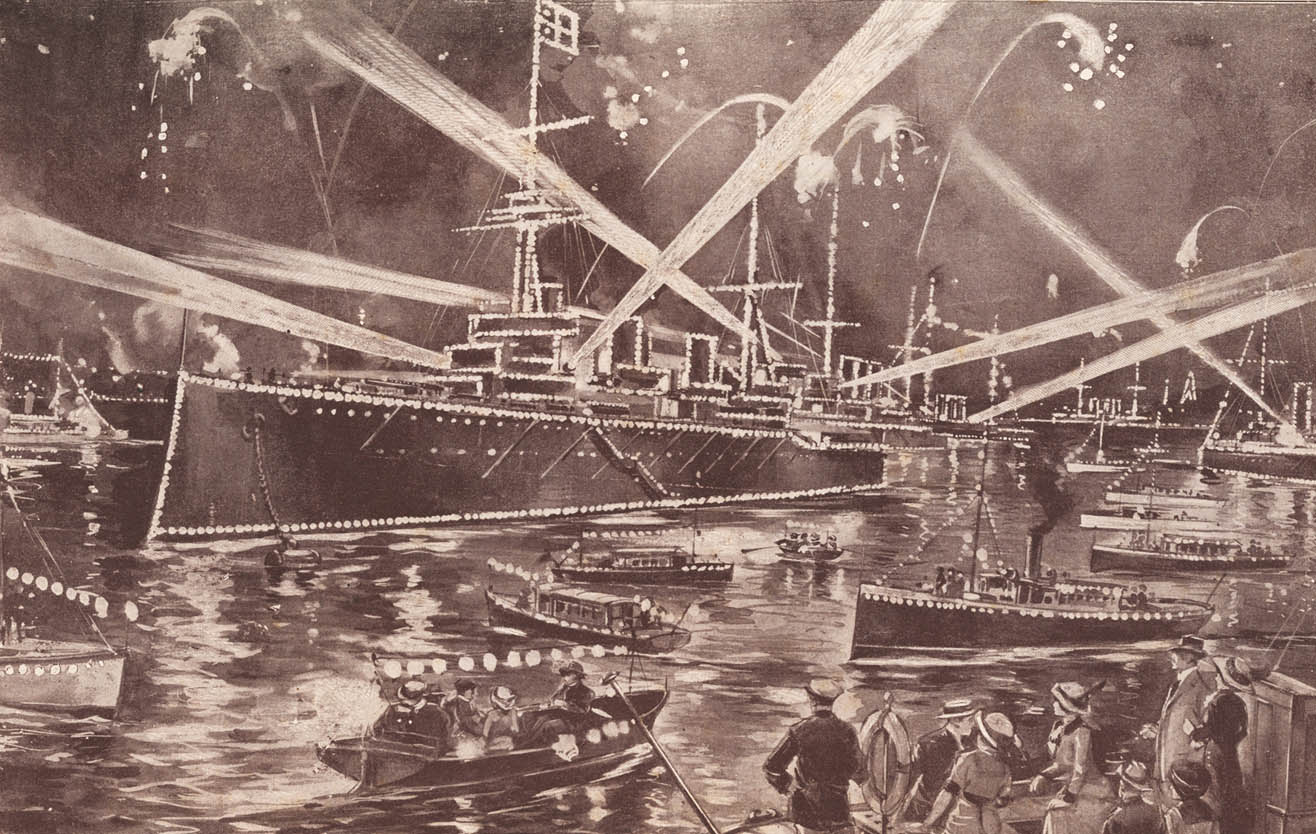 An artist’s impression of the night display following the Oct 1913 RAN first Fleet Entry, with HMAS Australia a centrepiece.

The Commonwealth of Australia was created on March 1, 1901 with the amalgamation of six previously separate states into a federation. The navies operated by the states, which were only intended for local defence, were merged to form the Commonwealth Naval Forces. These were renamed the Royal Australian Navy (RAN) on July 10, 1911.

Responsibility for the protection of Australia and her surrounding waters was transferred from the Australia Squadron of the Royal Navy on the arrival of a new fleet in Sydney in 1913. 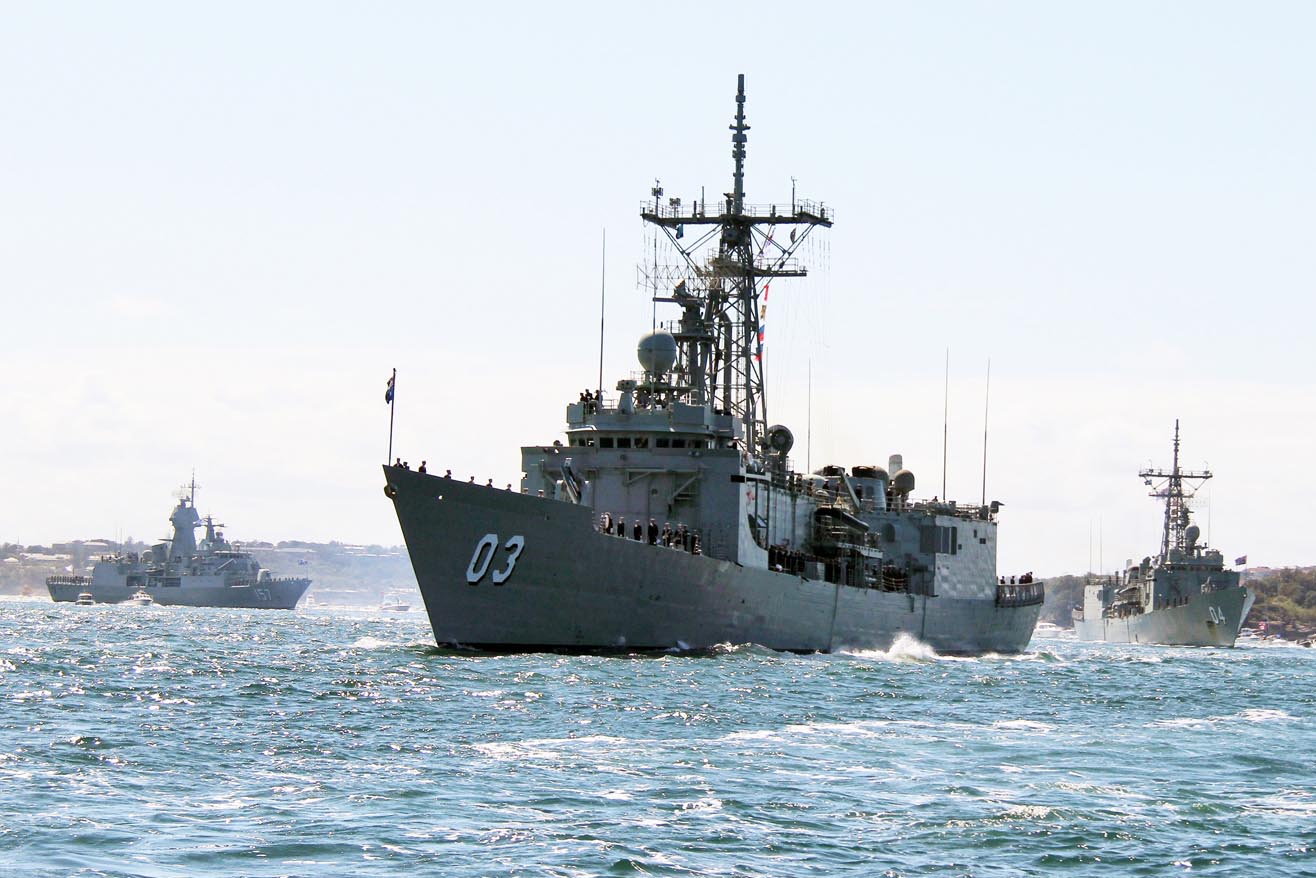 On October 4 that year a column of seven warships led by the brand new Indefatigable Class battle-cruiser, HMAS Australia emerged from the morning mist, to make an unforgettable impression on the waiting crowds.

The flagship, with her eight 12-inch guns, was a statement that Australia, a self-governing and independent dominion since 1901, was no longer a forgotten backwater of Empire. Now it not only possessed a fleet of its own but was also regarded as a key ally that Britain was determined to support in those uncertain times.

For the ships were mostly designed and built in Britain. HMAS Warrego was dismantled and shipped to Sydney’s Cockatoo Dockyard for reassembly to provide the Australian dockyard with experience of warship construction. Substantial proportions of the crews were British or transferred from the Royal Navy. 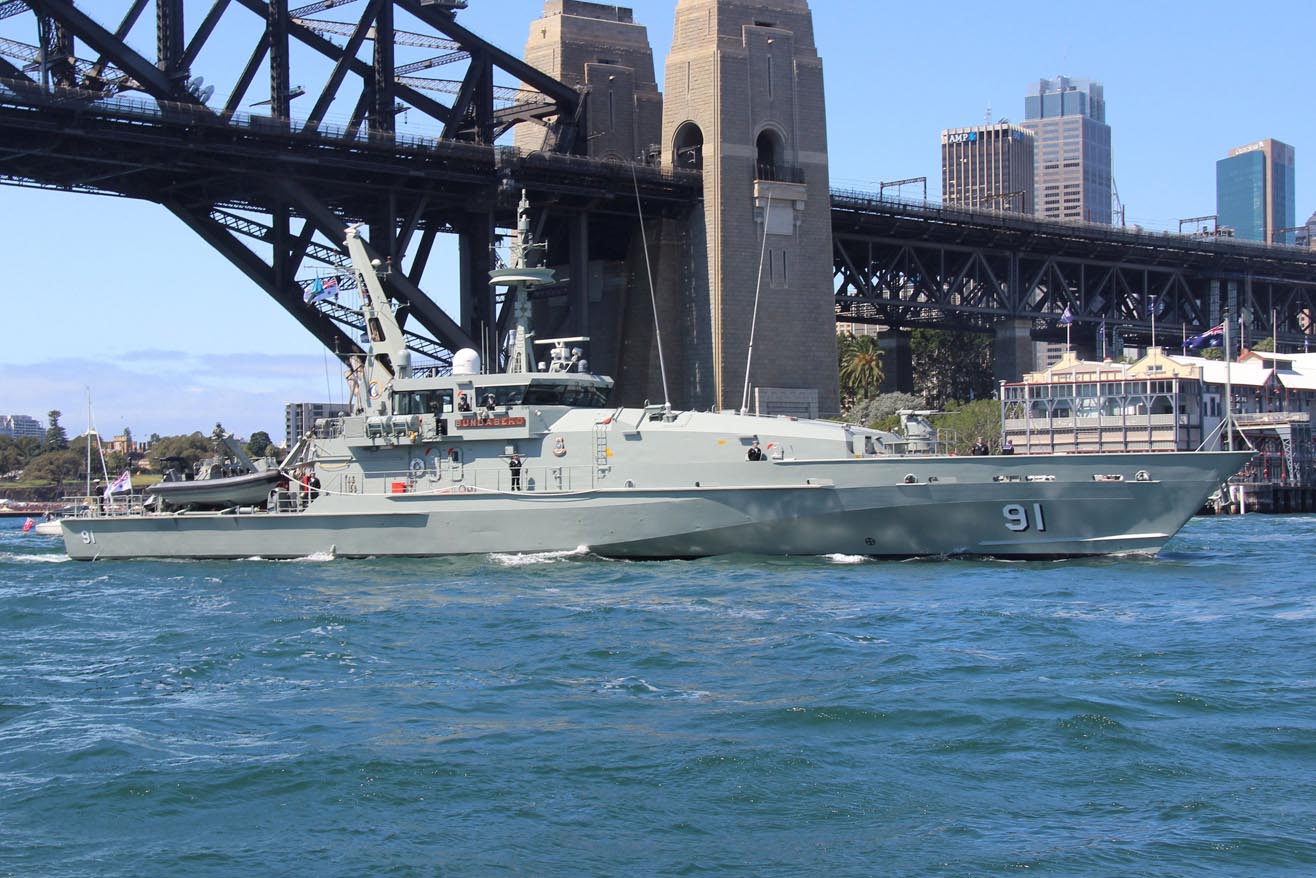 The column following HMAS Australia included two other brand new ships, the Chatham Class light cruisers HMAS Sydney and HMAS Melbourne. Then there was the eleven-year-old Challenger Class light cruiser HMAS Encounter and three Acheron Class destroyers (the aforementioned Warrego, plus HMAS Parramatta and HMAS Yarra) the oldest of which was only three years old. Truly, it was a modern squadron for a brand new navy.

One hundred years later, the RAN’s first fleet entry was re-enacted by another squadron of seven Australian warships and a host of vessels from friendly nations were invited to join the commemoration. This time the Adelaide Class frigate HMAS Sydney took the lead and was followed by sister ship HMAS Darwin, the Anzac Class frigates HMAS Perth and HMAS Parramatta, Armidale Class patrol vessel HMAS Bundaberg and the Huon Class mine-hunters HMAS Diamantina and HMAS Huon.

Following the path of their predecessors, the ships entered the eastern channel. As HMAS Sydney passed Bradley’s Head at 10am, she fired a 21-gun salute. The column then proceeded under Sydney Harbour Bridge, up the Parramatta River and around Cockatoo Island before the major vessels moored in White Bay and Barangaroo. 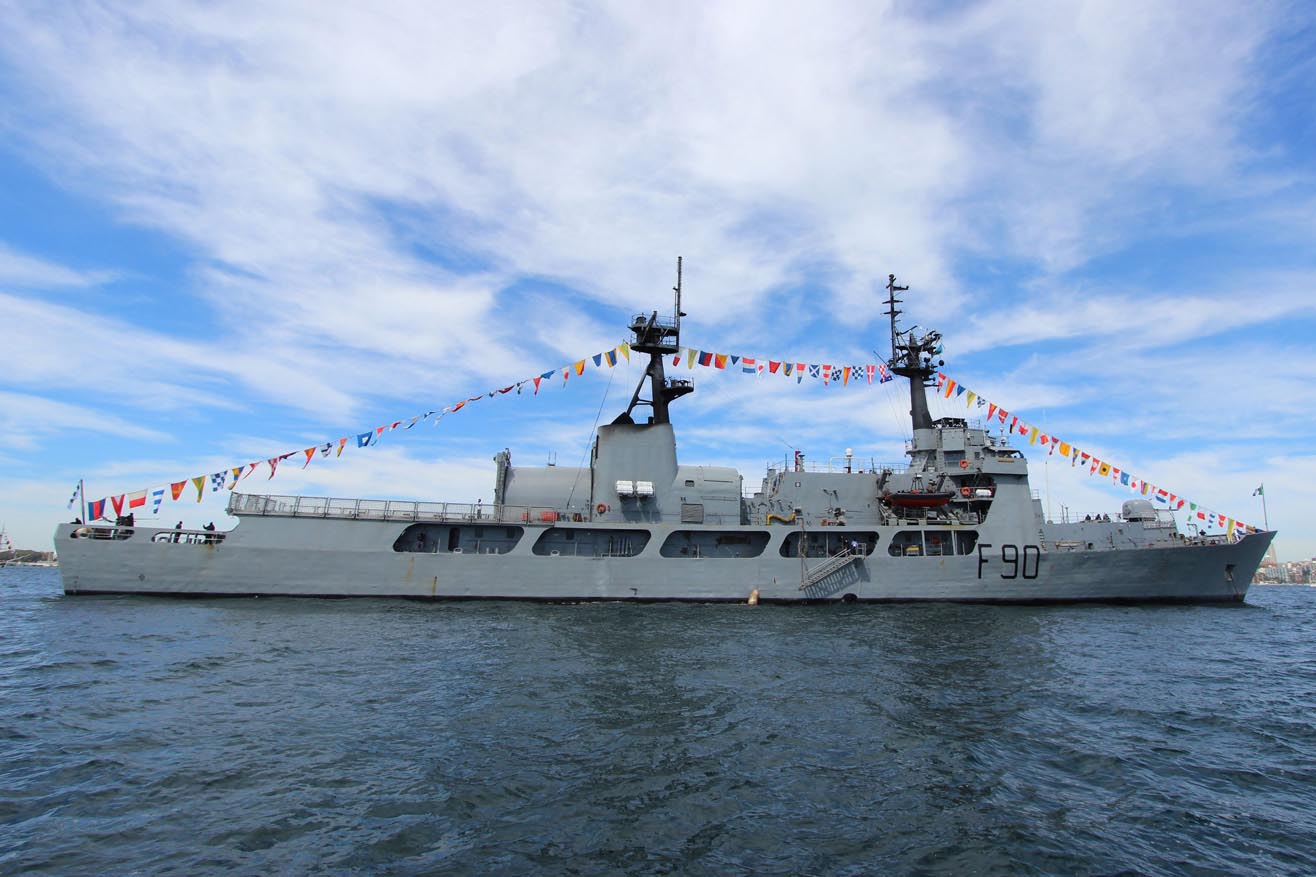 Waterfront locations were packed with crowds and boats of all shapes and sizes vied for position as a continual stream of warships entered Sydney Harbour. The warships’ entry was divided into six separate divisions and was phased over ten hours between 6.00am and 4.00pm. The major Australian warships had been preceded by two international divisions and were followed by three more. None of the international divisions passed under Sydney Harbour Bridge but went directly to their allotted moorings either at Garden Island Naval Base or to the north and east of Garden Island.

The IFR provided an opportunity for many of the participating nations to display their most modern and powerful warships. The first division consisted of the Luhu Class (Type 052A) guided-missile destroyer PLANS Qingdao, from China, the Endurance Class landing ship RSS Endeavour, from Singapore, and the Lekiu Class frigate KD Jebat, from Malaysia.

The fourth division consisted of the Ticonderoga Class cruiser USS Chosin, from the USA, the Takanami Class destroyer JDS Makinami, from Japan and NNS Thunder from Nigeria (a cutter acquired from the US Coast Guard in 2011). The latter is classified in Nigerian service as a frigate. 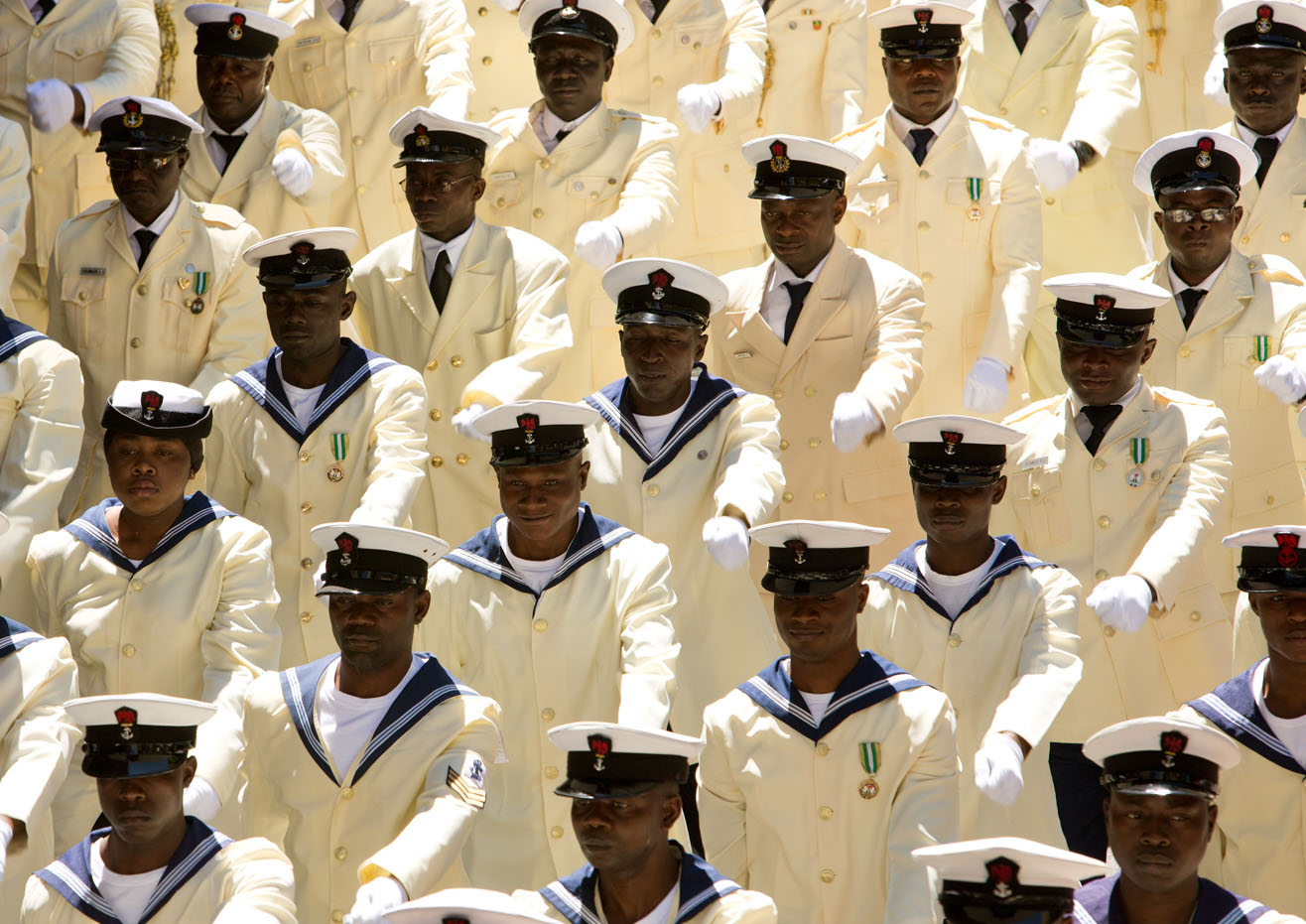 Ship’s Company from NNS Thunder march down George Street, Sydney, during the Combined Navies Parade as part of the International Fleet Review 2013.

The final division consisted of a lone ship, the fleet replenishment ship SPS Cantabria, from Spain. This vessel is currently supporting the RAN, after an agreement between the two countries in 2012, thereby allowing the Australian supply ships HMAS Success and HMAS Sirius to undergo maintenance. It has also allowed for the training of RAN crews to familiarize themselves with systems that will be similar to those being installed in the new (Spanish origin) Landing Helicopter Dock (LHD) ships under construction for the RAN, the future HMAS Canberra and HMAS Adelaide.

Notable visiting warships already in Sydney harbour included the only submarine to participate in the IFR, the Collins Class boat HMAS Farncomb and the brand new patrol vessel from Thailand, HTMS Krabi, which only commissioned on August 25, 2013. HTMS Krabi is a modified River Class vessel built in Bangkok to a BAE design and with technology transfer and support from BAE Systems Surface Ships.

In the evening HMAS Success hosted a reception, where Commander Australian Fleet (COMAUSFLT) Rear Admiral Tim Barrett, welcomed the participating international navies to Australia and in particular to the city of Sydney.

The entry of warships into Sydney harbour on the following day (October 5) for the headline act of the IFR would be in two columns, with a column of minor war vessels preceding a column of major Australian war vessels. The importance of minor war vessels in today’s security environment and the special relationship between Australia and Pacific nations, some of which are among the smallest nations in the world, was emphasised by the column consisting of: The Armidale Class patrol vessel HMAS Broome, Huon Class mine-hunter HMAS Gascoyne, Paluma Class survey vessel HMAS Benalla, Pacific Class patrol vessels HMPNGS Dreger (Papua New Guinea), HMPNGS Rabaul (Papua New Guinea), Voea Savea (Tonga) and FSS Micronesia (Micronesia). These were joined by the Balikpapan Class landing craft HMAS Labuan and HMAS Tarakan. 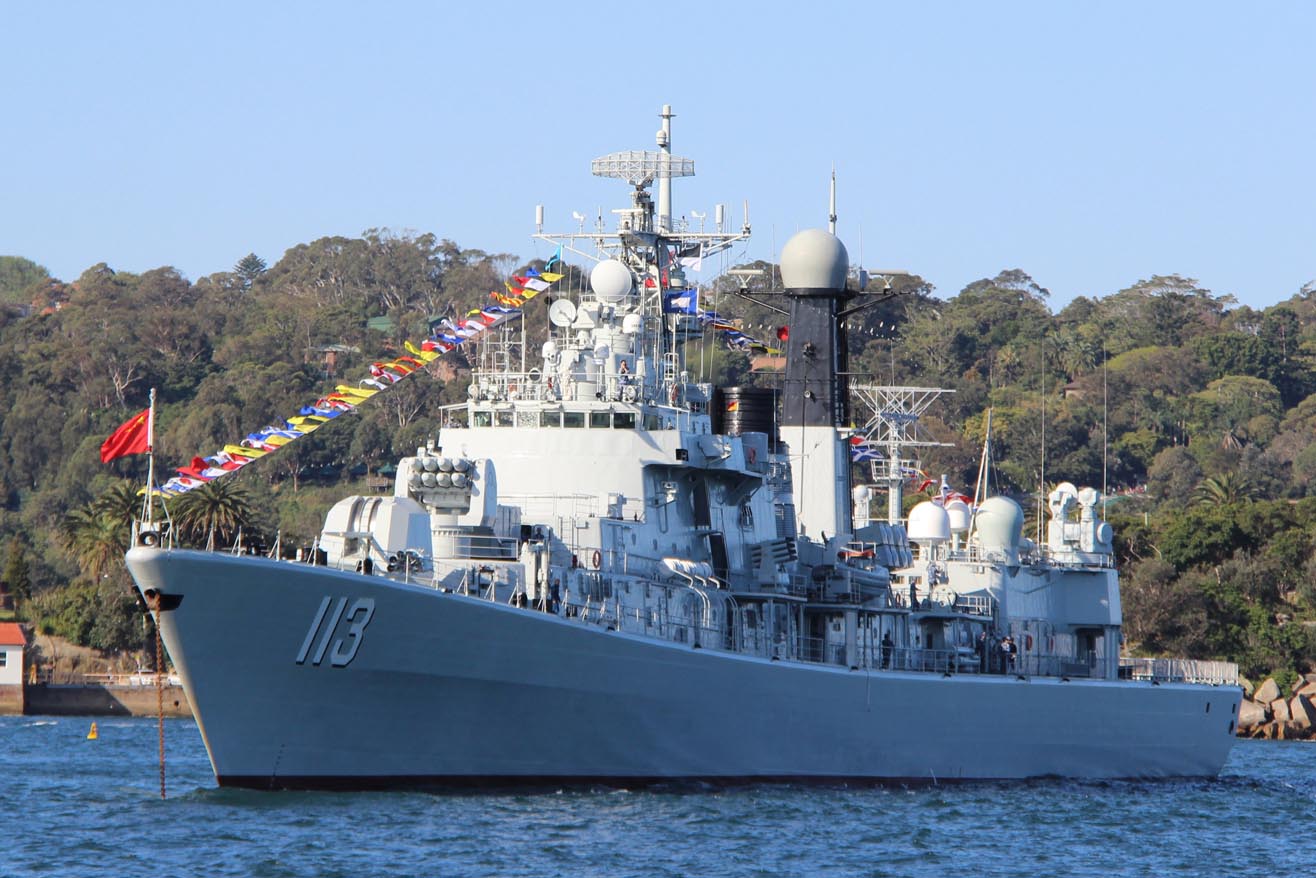 As the column entered the harbour, a 100-gun salute was fired from Garden Island Naval Base to signify the arrival of the Official Reviewing Officer, Her Excellency the Honourable Quentin Bryce AC CVO Governor-General of the Commonwealth of Australia, to the Review ship, the survey vessel HMAS Leeuwin. The column proceeded under the Sydney Harbour Bridge with most vessels going up the Parramatta River to moor at the mine-hunter base of HMAS Waterhen.

The same column of major Australian warships that had entered the day before closely followed the minor war vessels. As this second column reached HMAS Leeuwin, a formation of 26 military and naval helicopters flew over Sydney harbour. After passing HMAS Leeuwin, the second column proceeded under Sydney Harbour Bridge to moor in White Bay and Barangaroo. Some of these vessels would return later to form a moving line towards the end of the Reviewing ship route before turning back yet again to moor at Barangaroo and Garden Island.

HMAS Leeuwin, followed by the Australian National Maritime Museum’s former patrol boat, ex-HMAS Advance, the sail training ship Young Endeavour and a 1902 Sydney-built steam launch, the Lady Hopetoun, then proceeded around Sydney harbour. This allowed the Governor-General and her guest Prince Harry – representing Her Majesty Queen Elizabeth II, Australia’s Head of State – to review the warships moored around Sydney harbour and alongside Garden Island Naval Base. The Leeuwin moored there herself at the end of the Review to allow the Governor-General and Prince Harry to disembark and be greeted by a military band and Guard of Honour.

The attractions were not just waterborne, with eyes often diverted to scan the skies as aircraft performed often at the low level of 1,000 to 1,500 feet, to give onlookers an outstanding view. Fixed-wing aircraft performed throughout the day starting with a Ceremonial Fly-past in the morning and followed during the afternoon by further flights as a ‘Salute to the Navy’.

As day passed into night, enormous crowds descended on waterfront areas to watch a 30-minute firework spectacular. The decks of seven RAN warships moored throughout the harbour were used as firework launch platforms.

Over the following two days, residents and visitors were allowed to view some of the visiting ships up close and go aboard. The roles reversed on October 8, as instead of the occupants of the city visiting the Navy, the Navy visited the city. 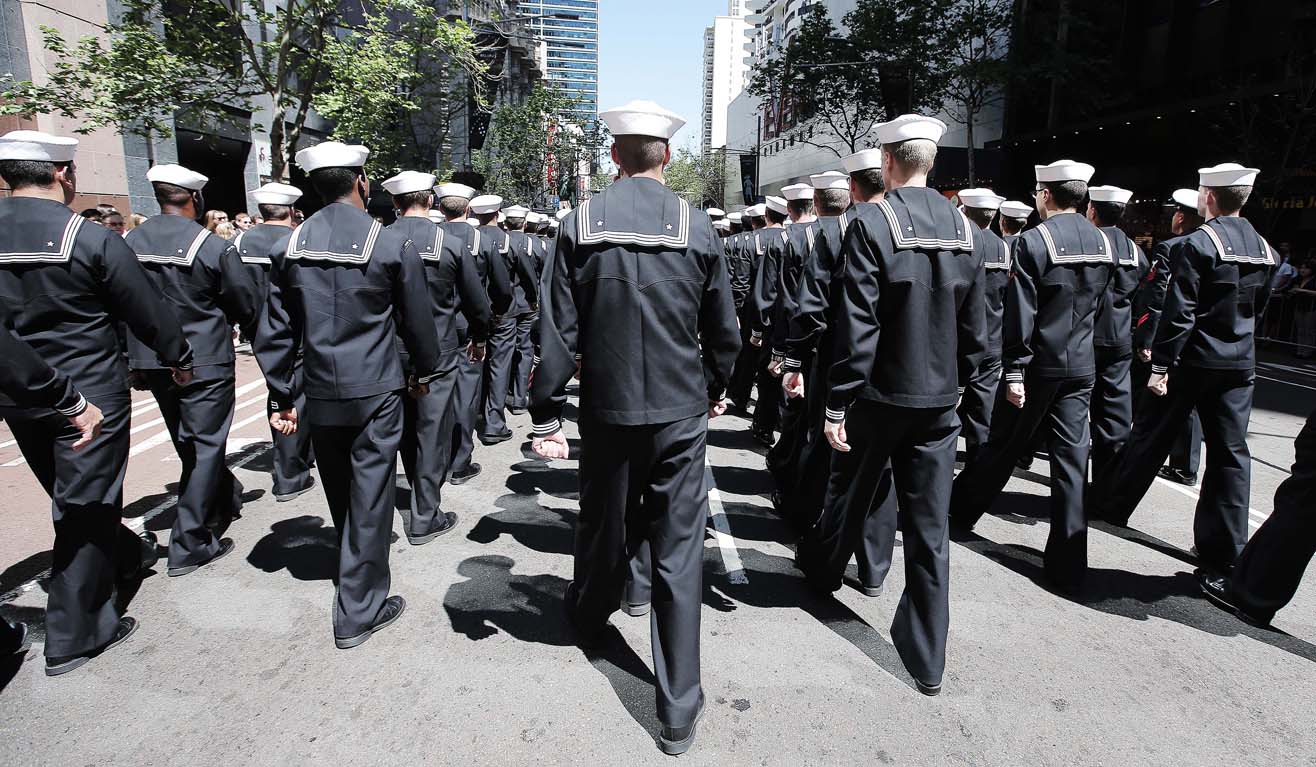 US Navy sailors march down George Street as part of the Combined Navies Parade held in Sydney.

Many main roads were closed, as for 90 minutes a combined parade was held with sailors and marines from the RAN and the visiting navies proudly marching through the streets of Sydney in glorious sunshine.

The International Fleet Review drew to a close with the departure on October 10 of Tall Ships for Auckland. Naval vessels were the next to leave, with many of the warships going on to participate in exercises at sea.

A total of 37 warships had taken part in the IFR, comprising 19 warships from the RAN and a further 18 from 17 countries, to provide for the Australian people a once in a lifetime spectacle. The total of warships would have been even greater if not for mishap or operational requirements.

The RAN withdrew the landing ship HMAS Choules from the event to operate off Papua New Guinea in Operation Landscape and also the survey ship HMAS Melville. The Royal Canadian Navy’s intended participants, the destroyer HMCS Algonquin and support ship HMCS Protecteur, were withdrawn after they collided en-route to Hawaii during a towing exercise, the Indonesian Navy’s sail training ship Dewaruci was withdrawn after suffering damage to her foremast during storms off Western Australia.

The three scheduled Russian participants, the cruiser Varyag and her two support ships (Boris Butoma and SB 522) were withdrawn for undisclosed reasons. It was disappointing that no ship from either South Africa or South Korea attended, bearing in mind Australia and South Africa’s joint participation in both world wars and Australia’s military support for South Korea during the Korean War.

Australia is these days a thoroughly modern nation, one with a new perspective and self-reliance but one thing has not changed. It was evident from the whole-hearted support for the event that the Australians still possess great pride in their navy. 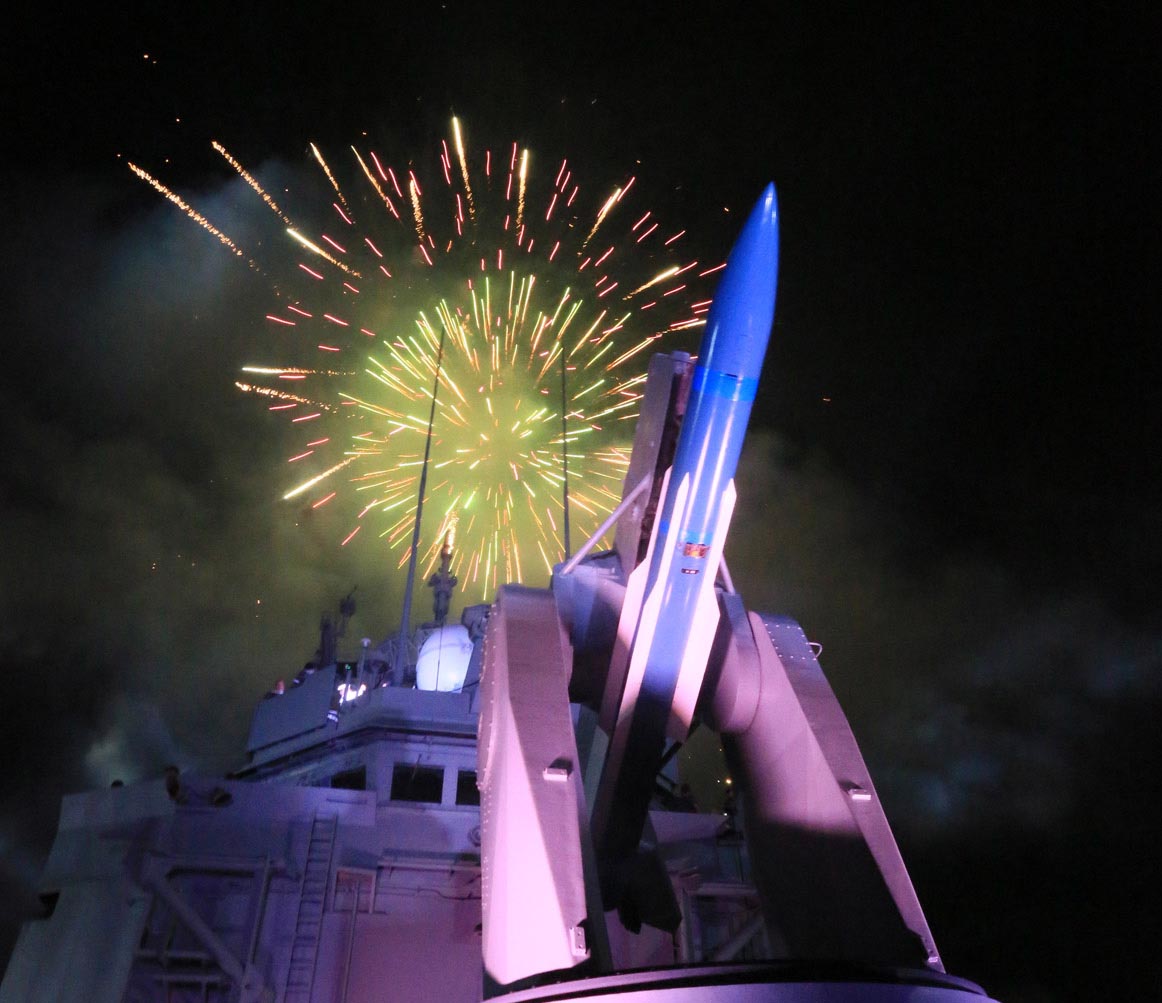 Fireworks explode over the Guided Missile Launcher System aboard HMAS Sydney during the final act of the International Fleet Review Spectacular, in Sydney Harbour.

The WARSHIPS IFR man in Sydney for the recent International Fleet Review was Ralph Edwards. To follow ...