The Strategic Defence Review (SDR) in 1998 committed Britain to an expeditionary strategy, which included replacement of three Invincible Class aircraft-carrying ships with two larger, more versatile, carriers. Shortly afterwards Britain joined the Joint Strike Fighter (JSF) programme, which had emerged from something called the Common Affordable Lightweight Fighter (CALF). The British bought their way into the JSF development programme as one of the founding partners. The JSF was intended to produce a replacement aircraft for the USAF, US Navy, US Marine Corps, the Royal Navy and RAF. Many more countries would join the programme and eventually thousands of JSFs would be built, making it a cheap, mass-production aircraft. One version, now known as the F-35B, would exploit Britain’s lead in Short Take-Off and Vertical Landing (STOVL) technology. It would be the next step on from the Sea Harrier. The thought was that, even if the new carriers were delayed (they were expected to enter service in 2014 and 2016 or even earlier), then by running on one or more Invincibles, the RN would still be able to fly the JSF. The core of the air groups in the new carriers would be 36 JSF. A lot of water has flowed under the bridge since those heady days. By the time of the 2010 Strategic Defence and Security Review (SDSR) manufacturing of the new carriers of the Queen Elizabeth Class – at an estimated cost of over £5 billion and delivery dates of 2016 and 2018 – had begun across Britain. Since SDSR it is only certain that one carrier is to be commissioned and the fate of the other is undecided. However, the choice of aircraft has changed, from the F-35B to the carrier variant F-35C, for which catapults and arrester gear (‘cats and traps’) will be needed. Under present plans Britain will have no fixed-wing strike carrier capability until 2020 and just six F-35C operating from the active carrier by then, rising to 12 aircraft in 2023. Last year the House of Commons Public Accounts Committee was alarmed to find that a full carrier strike capability will not be achieved until 2030. The House of Commons Defence Committee, meanwhile, has stressed that both HMS Prince of Wales and HMS Queen Elizabeth should become active as strike carriers, or Britain will not be properly defended. This is a point made repeatedly by many experienced naval experts and strategists, not least commentary writers in this magazine. To have one ship risks serious capability gaps when she is out of commission. Depending on an unreliable French carrier to stand in is not an adequate alternative. It should be carefully noted that changes imposed by SDSR on the carrier programme did not reduce the balance of risks and uncertainties. They only altered them and the actual costs of converting the carriers to accommodate the F-35C will not be known until later this year. The carrier variant F-35C may well be cheaper per unit, but it will allegedly cost more than £1 billion to redesign the new carriers to take the Electromagnetic Aircraft Launch System (EMALS). And the first ship into service, Queen Elizabeth, will be useful only for training sailors in operating the platform, as it is Prince of Wales that is to be the ‘cats and traps’ ship. Incredibly, it has been claimed that due to the ship conversion costs, Britain may change horses again, and go back to the F-35B. This variant has suffered delays and cost increases. The USMC has developed a concept of operations for the F-35B that envisages it as being transported to the theatre of operations and operated from bridgehead-airfields. It also hopes to buy 60 F-35Cs, which would operate from the US Navy’s large deck carriers. Meanwhile, a bilateral statement of intent has been signed by the First Sea Lord and the USN’s Chief of Naval Operations (CNO), which provides for the training of pilots, air traffic control officers, landing signal officers, aircraft handlers, weapons parties and aircraft engineers. RN pilots on exchange duties with the USN, who used to join with previous flying experience, will now earn their wings in the USA. They will eventually fly the single-seat F/A-18E Super Hornet in operational squadrons of the American fleet. They will qualify in arrested landings and catapult launches, and some will specialise as Air Warfare Instructors (AWI). In parallel two pilots are soon to start flying with the French Navy, in its Rafale strike-fighter, once they have passed their language exams. However the F-35 programme faces a bevy of serious issues, which have the potential to delay the In-Service Date (ISD) significantly and to drive up costs. The F-35 is now reckoned to be the world’s most expensive weapons programme, currently estimated to cost some US $385 billion for development and production, and about US $1 trillion to maintain and operate F-35 aircraft over future decades.  Its performance vis-à-vis so-called legacy aircraft is also being seriously questioned. Even the US Navy is ordering new batches of the Super Hornet that will be in service with the USN until at least 2025. Such are the serious concerns about the F-35C in the world’s leading navy.  Britain has yet to decide when it will buy-in to the F-35Cs, a decision not expected before 2013. The number to be bought is not expected to be officially confirmed until after the next SDSR, in 2015.  The solution is quite clear: the Super Hornet is a mature design with the latest avionics and weapons, so the UK should acquire some. A batch of Super Hornets could be bought or leased now at a known cost and a fixed certain delivery time. This would give the UK much-needed carrier capability just as soon as a ship is ready. A full air group of 36 strike jets could also be fielded as soon as possible. When the F-35 programme has matured, the production run for multiple other partners in full swing, reducing the unit cost, then the UK should proceed with the Lightning II (as the former JSF is now known). 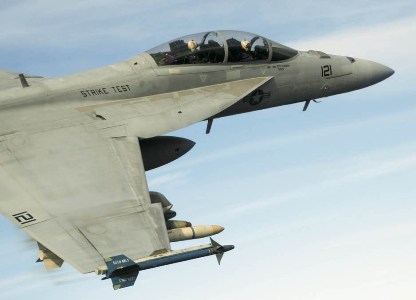 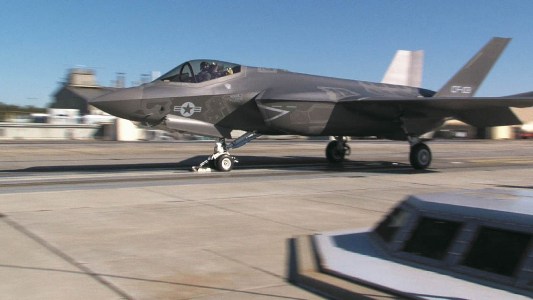 A CGI realisation of the F-35 aboard a Queen Elizabeth Class carrier. Image: Aircraft Carrier Alliance.

DOES THE UK GOVT JOIN ALL THE DEFENCE DOTS?

The Strategic Defence Review (SDR) in 1998 committed Britain to an expeditionary ...